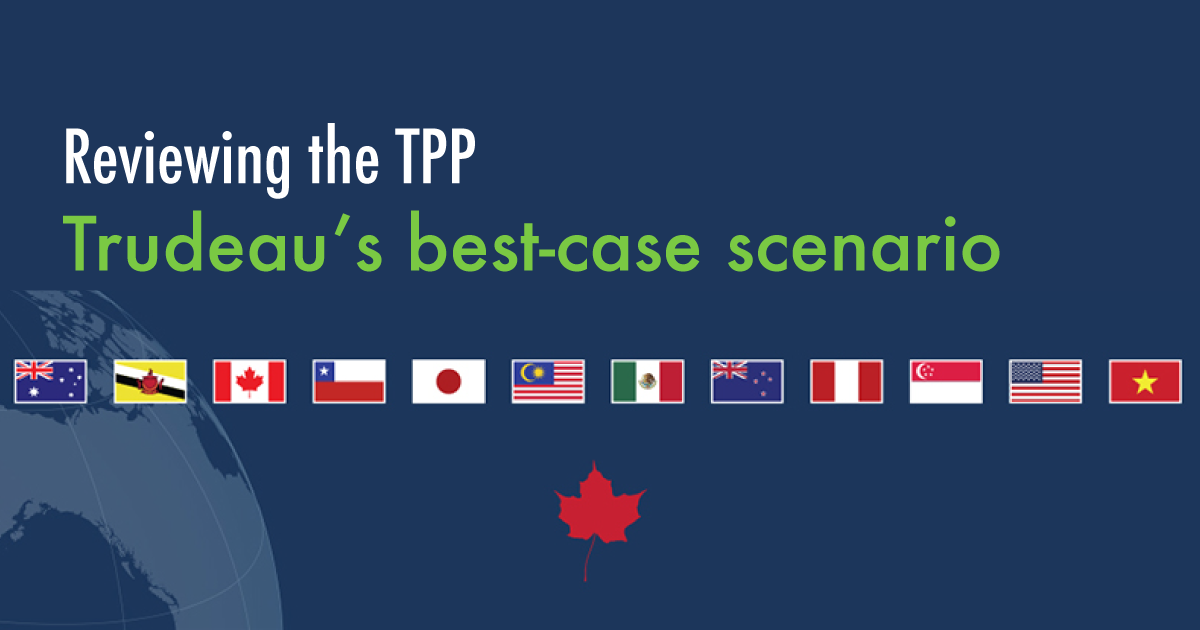 In the final days of the federal election, with the Liberals leapfrogging over the NDP on an ostensibly progressive platform, one question dogged Trudeau to the end: what was his position on the recently completed Trans-Pacific Partnership trade agreement (TPP)? We still don’t quite know the answer, though we may soon enough.

The TPP cannot be called progressive in any universe. In many ways it is a regressive agreement, locking in the market power of the largest investors, exporters, and patent and copyright holders at the expense of consumers and citizens. Modern free trade deals are not about lowering tariffs, which are at historical lows globally on almost all products, but setting the rules of global trade. A U.S.-led initiative like the TPP will naturally favour U.S. corporate interests. Their tough-as-nails negotiators make sure of it.

We got glimpses of how key Canadian sectors might be affected through election-period leaks and, finally, the October 5 release of a government summary of the TPP deal in principle. The outgoing Harper government had to promise compensation to the auto and dairy sectors for the market share losses they are expected to suffer. Canadians can also look forward to growth hormones in their milk and more temporary foreign workers entering on TPP visas.

Now this week we are finding out Canada may have acquiesced to U.S. demands that alleged copyright-infringing material be removed from the web as soon as a complaint is made and not, as Canadian law currently requires, after the copyright owner has convinced a court there is a violation. What a deal!

During the long election campaign, Trudeau repeatedly said that, as strong backers of free trade, the Liberals naturally endorsed the logic behind this 12-nation economic integration pact. But decrying the secrecy of the Harper government’s approach, and sensing growing public unease with the TPP for the reasons just mentioned and others, Trudeau also promised to “hold a full and open public debate in Parliament” if elected.

Obviously, a public review is badly needed. The TPP was concluded in the dying days of a “caretaker” government desperate to shake up a faltering campaign. The new government is only now getting a look at the concessions made by Harper and company to seal the deal. The Canadian public will have to wait longer.

Constitutional experts held that this maneuvering could only pass muster if a new federal government was genuinely able to reverse the Conservatives’ death-bed commitments. But history, and U.S. insistence that the deal must be accepted “as negotiated,” force us to temper our expectations about whether a meaningful process is likely.

At the most basic level, Trudeau has merely pledged to continue the Harper government’s tradition of tabling international agreements in Parliament prior to ratification, which remains the exclusive prerogative of cabinet. Typically, legislation is introduced in the House of Commons that would implement a specific agreement (e.g., the Canada-Colombia Free Trade Agreement), there is a second reading debate where MPs have an opportunity to convince each other that it’s a good or bad deal, and then the legislation heads to committee where witnesses are called to testify on the specifics of the deal.

We have both appeared before trade committees during this stage to challenge some of the worst aspects of Canada’s recent trade agreements. In particular, we have urged successive governments to remove investor–state dispute settlement provisions, which create an executive, extra-legal private court system for investors upset with public policy decisions; to create allowances for public procurement as a job-creation and development tool for local and provincial governments; to reject absurdly long protections for Big Pharma and copyright holders that result in higher costs for consumers; and to fully exclude public services from the reach of chapters designed to force open certain sectors or activities to private profitmaking.

Prior to May 2011, in the minority Parliament, these concerns, which are shared by many Canadians including labour, environmental organizations, Indigenous groups, human rights and development NGOs and others, would tend to be mentioned, but ultimately sidelined, in committee reports to the House of Commons, which invariably recommended Canada ratify the free trade deal in question.

During the Harper majority years, though opposition parties tried their best to get critical witnesses before trade committee, their concerns would be purged from the official report. In the end, the record would show near unanimous support for a given trade deal, with high praise from a range of business lobbies. A final third reading vote in Parliament, Senate endorsement and royal assent made the deal final for perpetuity.

Can we expect more from the newly elected Liberal government? No, but we should demand it, especially for an agreement as permanent and imposing as the TPP. But what might a better process look like?

An agreement that purports to set binding rules for regulating commerce in the 21st century certainly deserves public hearings, across the country. Trudeau has invited the provinces to join him in Paris for this year’s international climate talks. He could equally invite them to help him co-ordinate national consultations on the TPP.

Trudeau won a mandate to do a great many good things (invest in public transit, renewable energy, and a revitalized public service, for example), but the TPP was not one of them and could interfere with their achievement. Ontario was recently burned by a WTO decision ruling its landmark Green Energy Act illegal because it favoured domestic production of solar and wind power components. The TPP may include unanticipated new restrictions on what the provinces and federal government can do for the sake of meeting carbon emissions reductions and transitioning off fossil fuels.

Importantly for Trudeau, the new prime minister could significantly boost his stature and credibility by informing TPP partner countries Canada cannot be bound by the agreement as negotiated, and that public input could result in Canadian demands for changes. His resolve can only be strengthened by the U.S. insistence that it can still force changes in Canada’s implementation of its TPP commitments.

Normally, a treaty comes into force after a certain number of signatories have ratified and implemented it. But in the case of the TPP the U.S. has inserted an additional step where the White House must “certify” that a trading partner’s implementation legislation is in full compliance before the TPP comes into effect. There’s no good reason Canada should suffer this humiliating process, which would allow U.S. congressional and corporate interests to wrest even further concessions.

Popular support for the TPP is not as high as the government or business groups probably expected. A wrong step on this early test for the Trudeau regime could be damaging to the new government, making other planks of its platform all the more difficult to realize.

Trudeau can only gain by being more open and democratic than the last government, which also wouldn’t be difficult. He could start with the review process for the TPP—by making sure all voices are heard, and that they feel their input has the capacity to alter the outcomes for Canada. The health of our economy, our public services and our democratic institutions depends on it.

Stuart Trew is the senior editor of the Monitor, a bimonthly journal of the Canadian Centre for Policy Alternatives. Follow Stuart on Twitter @StuJT. Scott Sinclair directs the CCPA’s Trade and Investment Research Project.