If you were to hold a public conference—on any issue—it's reasonable to think that you would want your keynote speaker to agree that the issue exists. That would seem a sensible proposition for most people. So it is absolutely perplexing that the City of Regina decided to invite a well-known climate science denier as its keynote speaker to a conference designed to inform the City’s goal to become 100 per cent renewable in response to that climate science. Despite the hew and cry of a handful of climate deniers on social media, this conference is not a climate science debate. The stated purpose of the Reimagine Regina conference is to inform how the City can achieve its goal of becoming 100 per cent renewable by 2050:

“The City of Regina has committed to being a 100 per cent renewable city by 2050. To achieve this goal, work is underway to develop an Environmental Sustainability Framework that will be influenced by the experiences and inspiration shared at the Reimagine Conference.”

We have to wonder why some at the City of Regina believed it was a good idea for their conference keynote speaker to reject the very premise of the conference. Some have suggested the City was caught flat-footed and “didn’t do its homework.” We believe this is too generous. Dr. Moore’s statements that “global warming has stopped,” that “the climate crisis is fake science,” and that we should “celebrate carbon dioxide,” are all a matter of the public record, and have even been promoted by the President of the United States: 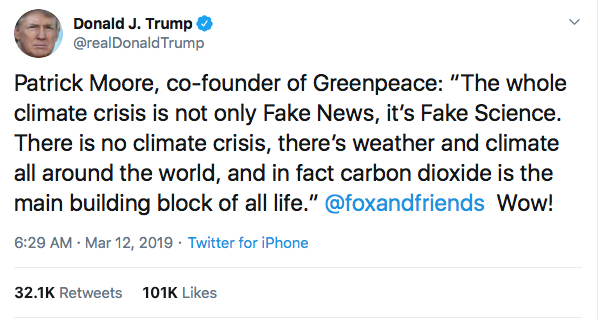 Councillor Mike O’Donnell in defending the decision, certainly appeared to be aware of Dr. Moore’s views  stating, “We were aware that he would bring a perspective. We want to make sure that people look at the whole agenda, and see what else we are trying to do to make sure that there is a complete view here presented on. On sustainability, alternate energy and all that kind of stuff.” Moreover, Dr. Moore has stated himself what he will present to the conference:

"I'm going to give a pretty complete presentation of the long history of climate on this Earth and then I'm going to talk about energy choices because the biggest expense of this, basically, climate emergency hoax ... is not the climate research," Moore said. "The biggest expense is basically revamping our entire energy system with much more expensive, less efficient technology than we have at the present time."

So it seems highly unlikely that the City didn’t know who it was inviting, and if they did they cannot claim ignorance now. The more likely explanation for Dr. Moore’s invitation is that individuals within the City administration and/or the City Council want to change the nature of the commitment to become 100 per cent renewable by 2050. It is important to see Dr. Moore’s invitation as one in a series of steps that the City has taken to diminish and limit the motion that passed unanimously at City Council on October 29, 2018.

According to the authors of the motion (councillors Stevens, Findura, and Murray), the 100 per cent renewable target was originally meant to apply to a community-wide energy transition. However, when the City administration produced its Energy and Sustainability Framework report, which was passed by Council on July 29, 2019, it defined a “renewable city” as limited to “all municipal government operations being 100 per cent powered using only renewable energy." City administration (and Council by accepting the report) effectively slashed the scope of the motion from a project of community wide energy transition, to a narrow focus on only the operations of the City as a corporation. The report also contravened the initial motion by proposing that the plan for its implementation (which was due by the fall of 2019) wait until after the Reimagine conference (to be held in May of 2020). Moreover, the original motion did not call for a conference as a crucial step to informing the City’s renewable framework. The report also moved away from a singular focus on renewable energy, instead suggesting that the oil and gas sector is an important participant in the conference “to ensure the City can leverage any innovations the sector is pursuing,” a move that Councillor Stevens heavily criticized. The current conference agenda also includes a heavy presence from the nuclear industry, an energy source the City of Regina's own report describes as "non-renewable."

Taken together, there appears to be a pattern of re-interpreting and re-defining the motion to reduce its scope and ambition. The invitation of a keynote speaker who actively argues against the urgency for renewable energy for a renewable energy conference looks to be yet another effort to denude the original intent of the Renewable Regina Motion.

It now appears that the public backlash to the Moore invitation may force the City to re-think its invitation. While we certainly agree that Dr. Moore is ill-suited to be the keynote speaker for such a conference, we are also concerned that the original intent of the Renewable Regina motion has been lost in the subsequent media tumult. It may be possible to rescue this intent if the conference can pivot towards its original purpose: providing guidance to the City’s efforts to become 100 per cent renewable. It is unfortunate that Dr. Moore’s invitation has overshadowed the many other participants at the conference with valuable experience that can help guide the City.  As a latecomer to the renewable city movement, Regina can learn valuable lessons from those who have gone before it and perhaps recover some of the ambition of the original motion. In addition, we would like to see the City consider inviting representatives from some of the leaders of renewable cities. Cities like Vancouver B.C., which is promising to be 100 per cent community-wide renewable before 2050. Or Portland Oregon, where they achieved their 2030 goal for 100 per cent renewable energy for city operations two years ago and are committed to reach community-wide renewable by 2050. Or Salt Lake City, which is committed to community-wide renewable by 2030.

Let’s turn controversy into opportunity. Let’s use the current attention on this issue as a springboard to reignite the optimism and ambition that so many of us felt about our city back in October of 2018 when City Council first compelled many of us to reimagine what Regina could be.

Emily Eaton is an Associate Professor in the Department of Geography and Environmental Studies at the University of Regina. She is the author of two books, Fault Lines: Life and Landscape in Saskatchewan’s Oil Economy (with photographer Valerie Zink) and Growing Resistance: Canadian Farmers and the Politics of Genetically Modified Wheat. Her work concerns environmental, social, and economic aspects of resource development and resource-based communities.

Simon Enoch is the Director of the Saskatchewan Office of the Canadian Centre for Policy Alternatives. He holds a PhD in Communication & Culture from Ryerson and York University.