Reflections on my big Obama moment 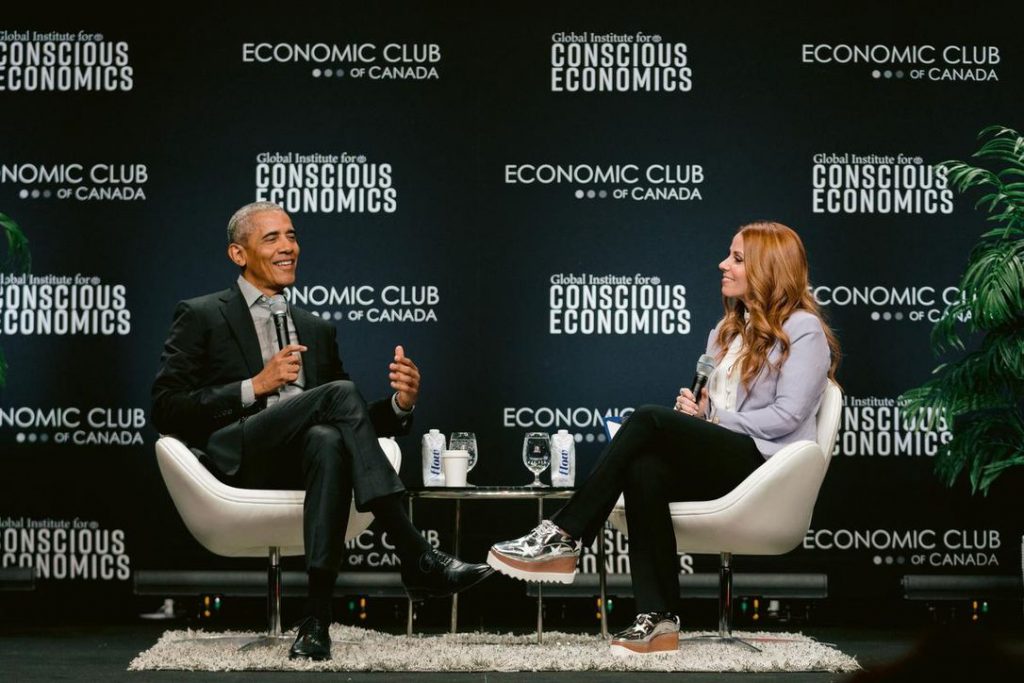 In January, I joined more than 6,000 people at the Toronto Convention Centre to hear former U.S. president Barack Obama speak about “the future of work.” Seeing him in person for the first time got me reflecting on the past, and what remains my most impactful Obama moment.

I was two months into my first year of law school at McGill University when, on November 4, 2008, the world stopped to watch whether Barack Obama would win the 2008 U.S. presidential election. It was a typically chilly night in Montreal, and I was crowded into the small living room of a “student chic" condo of one of the other five Black law students in my year. Four of five of us were there, along with half a dozen non-Black, mostly white fellow law students.

Our anticipation grew steadily as the night went on. Frenzied, boozy chatter and excited laughter dimmed to a hum of quiet tension on the occasional comments coming out of CNN’s Wolf Blitzer. I still remember the pregnant pause and sudden stillness in the room when he finally announced, “This is a moment that a lot of people have been waiting for. This is a moment that potentially could be rather historic.”

We held our breath. And then, it happened. The screen lit up: “BARACK OBAMA ELECTED PRESIDENT.” The room erupted into raucous cheers, shouts, tears, hugs and high-fives.

It was a rapturous moment for all of us. The warmongering, exceptionalist George W. Bush presidency had been disastrous by any measure; here was someone offering a hopeful way out of the country’s self-inflicted political quagmires. But this election night was a particularly powerful moment for me and the other Black law students in the room. It tied us together with a surge of excitement, a gripping euphoria, and the pleasurable feeling of infinite possibilities.

This was not just because Obama is Black. That mattered, of course. But Obama’s victory also helped shore up our own insecurities as legal students at one of Canada’s leading (and overwhelmingly white) law schools.

We were hyper aware of the fact that before Obama became president, he was a confident yet sometimes uncertain Black student trying to navigate the challenges of a law school that had a racial dynamic not much different from the one we experienced at McGill. Obama felt like us. And on that night in November 2008, he was us. We had won!

In the midst of the celebration, it felt like a part of the weight of centuries of Afrophobia, slavery, segregation and anti-Black racism had been lifted off our hearts, minds and spirits. I remember pausing at one point and quietly thinking to myself, “Is this what freedom feels like?”

Yet, as joyous as this occasion was, the 2008 election is not my most memorable Obama moment. It’s what happened to me shortly after that has marked me most deeply to this day.

Strolling the Montreal sidewalks home, I overheard a few short words from a conversation between two white men and a white woman a few paces ahead of me. “Umm, does this mean that we have to respect Black people now?” Strangers to me, they burst into laughter, then noticed I was within earshot.

The trio quickly hushed and scurried across the street. When they got to the other side, their laughter continued, only this time with a hint of uneasy nervousness.

Perhaps they were embarrassed. Perhaps they felt they were laughing ironically at the status quo collective disrespect of Black people. I think it’s more likely their embarrassment was from the slip-up of letting a Black person hear how poorly society truly felt about Black people, even when one of them had ascended to the U.S. presidency.

This is my big Obama moment. Not the historic win, the feelings of freedom it inspired. Not the sensation of floating through the downtown streets of Montreal as I made my way home that night after the election party, excitedly wondering about the possibilities that would come next.

No, the moment I most remember is how quickly the bubble burst on my dreamy and joyous fantasies of a Black U.S. presidency. It has helped me stay woke ever since.

The Obama event in Toronto this January featured a who’s who of Black community leaders, professionals and politicians. Since then, many have asked me what it was like to have my “Obama moment.” I tell them it was sobering.

What I’ve really wanted to say is that, sure, symbolically, Obama is cool. But in reality, what Black people need is to be respected politically, economically, socially. Without this, “hope and change” is just a joke.