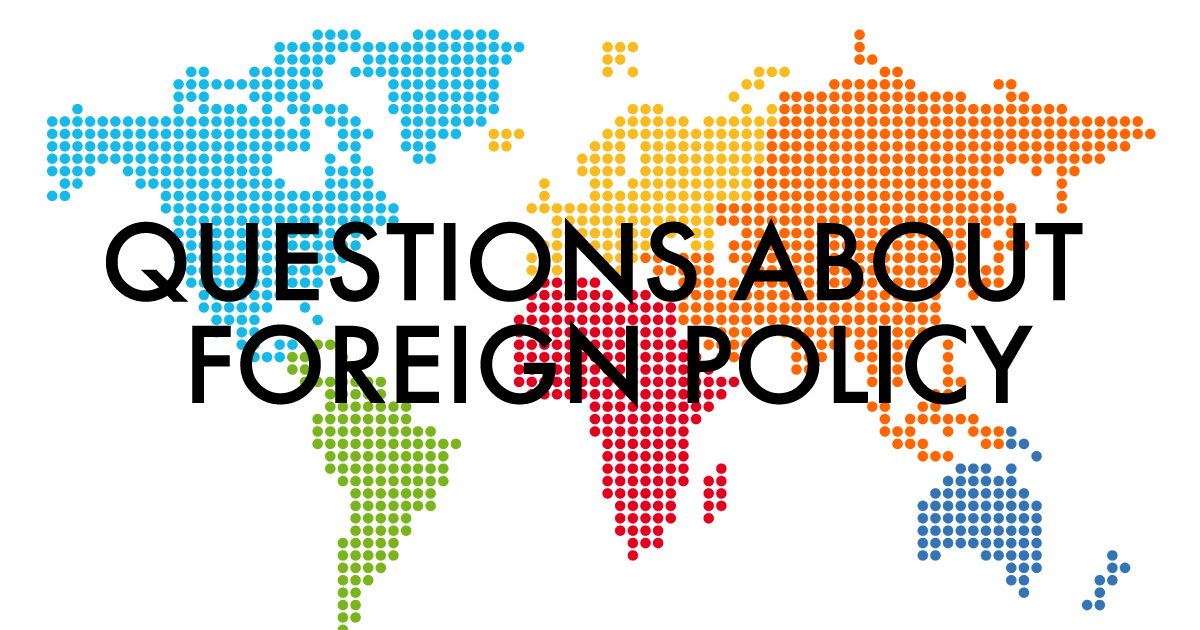 Tonight’s Munk Debate on Canadian foreign policy promises to “provide the public with important insights into how our next prime minister will defend and project Canada’s interests and values on the global stage.” Debate moderator Rudyard Griffiths told the Globe and Mail that given the “totally new context and reality” of a changing international order, “we need a creative foreign policy vision to go with this new era we’re entering into, which I characterize as an era of profound uncertainty.”

CCPA researchers and economists also have high hopes for a substantive discussion this evening on how Canada should operate globally in efforts to promote international peace, end poverty and reduce inequality, and secure commitments to immediately reduce greenhouse gas emissions. They will be looking for answers to these important questions for party leaders.

Bruce Campbell, Executive Director, CCPA 1) Curiously, Canada has not ratified the groundbreaking international Arms Trade Treaty, a convention setting global standards for trade in armaments that came into force in December 2014. The treaty now has 130 signatories including the United States. If elected, would your government sign and ratify this treaty?

Seth Klein, Director, CCPA-BC The current Syrian refugee crisis is likely just a small taste of what’s to come in the era of climate change. According to some analysts, an extended drought played a key role in exacerbating the Syrian crisis. As climate change progresses, we are likely to see a dramatic increase in the number of climate migrants (a topic explored in this report by the CCPA’s Climate Justice Project).

Given that Canada has contributed more than its fair share to global GHG emissions, while the harshest impacts of climate change will be felt by the world’s most vulnerable populations, what role should the federal government undertake in developing a comprehensive response to climate migration? Do we need to update our immigration laws and intake numbers in recognition of this new reality? And what additional support should Canada extend to those poorer countries receiving the bulk of climate migrants?

Molly McCracken, Director, CCPA-MB While progress has been made on the United Nations Millennium Development Goals, more than 800 million people globally still live on less than $1.25 a day. When once we were a global leader, Canada’s contributions to ending poverty internationally are shrinking. Canada’s official development assistance (ODA) was 0.24% of gross national income (GNI) in 2013/14, down from 0.34% in 2010/11. This is far behind the United Nations target for ODA of 0.7% of GNI. Recently Canada’s international development efforts have focused on maternal, newborn and child health. This aid has been tied to private-sector partnerships and does not support the full range of sexual and reproductive health services (e.g., abortion services are not funded). Globally 47,000 women die each year due to unsafe abortions, 13% of maternal deaths according to the World Health Organization.

Will you commit to reaching the United Nations target for aid to 0.7% of GNI as the United Kingdom has done? Will you ensure that Canada’s foreign aid dollars go to support a full range of sexual and reproductive health services, including access to safe abortion? Will you ensure aid is targeted where it is most needed through public sector partnerships?

Simon Enoch, Director, CCPA-Saskatchewan Canada's official position on the Israel-Palestine conflict is that it does not recognize permanent Israeli control over territories occupied in 1967 (the Golan Heights, the West Bank, East Jerusalem and the Gaza Strip). The Department of Foreign Affairs, Trade and Development notes: "The Fourth Geneva Convention applies in the occupied territories and establishes Israel's obligations as an occupying power, in particular with respect to the humane treatment of the inhabitants of the occupied territories. As referred to in UN Security Council Resolutions 446 and 465, Israeli settlements in the occupied territories are a violation of the Fourth Geneva Convention. The settlements also constitute a serious obstacle to achieving a comprehensive, just and lasting peace."

Given that Canada recognizes the Israeli settlements in the Occupied Territories are a violation of international law and an obstacle to a lasting peace, what will your government do to pressure the Israeli government to stop the construction of new illegal settlements?

Erika Shaker, Director, Education Project Recently, the definition of citizenship—and the rights and protections associated with it—has become increasingly murky. Voting rules for expats have been tightened, making it much more difficult for Canadian citizens living abroad to participate in the electoral process. The new Citizenship Act (C-24) directly impacts dual citizens and people who have emigrated to Canada and become Canadian citizens, expanding the grounds under which revocation can occur and amending the procedures leading to that revocation, effectively creating a system of two-tiered citizenship. Critics have raised concerns that this exposes many Canadians to losing their citizenship without due process, and also impinges on their rights to travel outside the country. It also has implications for these second-tier Canadian citizens who may be charged with crimes while outside the country (Mohamed Fahmy is a recent example).

What will you do to protect the right of Canadian citizens living abroad to participate in the electoral process? Further, what will you do to ensure that there are not two classes of Canadians: one whose citizenship cannot be revoked, and one—depending on country of origin and/or residence—whose can?

Marc Lee, Senior Economist and Co-director, Climate Justice Project, CCPA-BC The upcoming Paris conference will present a new opportunity for nations to address climate change and reduce carbon emissions. How would your government play a constructive leadership role toward a new international agreement? Do you agree with recent climate science that concludes the vast majority of Canada's reserves will need to stay underground and undeveloped?

Hugh Mackenzie, CCPA Research Associate Canada’s international reputation has deteriorated dramatically in the past 20 years. We have gone from being a leader on environmental issues (acid rain initiatives, CFCs, etc.) to being widely criticized as a conspicuous laggard. We have gone from a highly acclaimed role as a leading contributor to United Nations peacekeeping missions to conspicuously absent from peacekeeping and conspicuously present in war-making. We have gone from a recognized role as an independent honest broker in the Middle East to taking sides so unequivocally and unquestioningly that we are no longer able to make a constructive contribution to resolving those conflicts. Leaning on a false either-or trade-off between going to war and providing humanitarian aid, our contribution to the crisis in Syria has been limited to bombs and fighter jets. And we have been shamefully lacking in generosity in our approach to refugees, in sharp contrast to our past experiences with Southeast Asian refugees in the 1970s, for example.

What immediate steps will you take, in your first 100 days in office, to begin to reverse this trend?

Lynne Fernandez, Senior Researcher, CCPA-MB As one of the original members of the ILO, and one of the crafters of the 1998 ILO Declaration of Fundamental Principles and Rights at Work, Canada should be in the forefront of defending the rights of the 230 million migrant workers who leave their homes to work in exploitive, dangerous situations. Despite paying lip service to ILO conventions, Canada allows migrant workers to work in difficult conditions for low pay, while at the same time making it increasingly difficult for migrant workers to immigrate to Canada.

What will your party do to uphold the ILO conventions Canada has signed onto so that migrant workers everywhere are treated fairly? What will it do to eliminate the two-tiered labour market emerging in Canada, where migrant workers are not afforded the same rights as Canadian workers?

Steven Staples, CCPA Research Associate National interests, alliance obligations and UN authority have all been by cited by Canadian leaders as reasons to send our military forces abroad. By which standards will you, as prime minister, determine whether the men and women of the Canadian Armed Forces should be deployed to areas of conflict

The Arctic region is growing in economic, political and ecological significance. How should Canada promote its sovereignty, and international co-operation among Arctic nations, to ensure the region can be developed peacefully and sustainably?

A generation after the end of the Cold War, thousands of nuclear weapons remain deployed or held in reserve by states, leaving open the possibility of their use by intent or by accident. These unique weapons are mostly in the hands of the United States and Russia, but the list of nuclear powers is still growing. The world has made great strides to eliminate chemical weapons, biological weapons and even landmines. Is it time to add nuclear weapons to the list of banned weapons and remove the threat they pose to all nations, including Canada?

Tony Clarke, CCPA Research Associate The dispute settlement mechanism incorporated into most international trade agreements co-signed by Canada poses a constant threat to national sovereignty by granting transnational corporations powers to sue governments directly for alleged violations of trade rules through secret tribunals. Given this reality, and the fact that any constructive public policy actions which may be taken by your government to combat climate change at COP 21 in Paris this December could be immediately challenged and thwarted by corporations under such global trade rules, will your government support a carve-out on climate issues with respect to the dispute settlement mechanism in all our trade and investment pacts?

Scott Sinclair, Director, Trade and Investment Research Project The Obama administration is pushing hard to conclude the Trans-Pacific Partnership (TPP) negotiations. Trade ministers including Ed Fast are meeting in Atlanta this week toward this end. Parliamentary convention dictates that caretaker governments should refrain from taking major policy steps during an election, especially without consulting the opposition. Is it legitimate for the current government to conclude such a sweeping secret trade agreement on the brink of a federal election? If elected, how will your government defend Canada’s interests, including the tens of thousands of well-paying Canadian jobs at risk in the auto and dairy industries?

For more key election questions from CCPA staff and researchers, check out our blog post, Questions for the Leaders’ Debate on the economy.