The Québec government recently issued its new economic policy, “Putting Jobs First”. The Premier and her Finance Minister have realized that the long-awaited acceleration of economic growth still has not arrived. Hence, they have presented a stimulation plan meant to reinvigorate Québec’s economy and to create new jobs.

Too little too late, you could say. Ever since Marois’s government took power, it has implemented austerity policies that undermine the chance of a recovery. Even though a number of stakeholders had warned the government, the zero-deficit obsession was seemingly too overwhelming to make the right decisions at the right time.

The announcement, even though it contains some worthy aspects, cannot erase the improvidence of this administration’s first 13 months of economic governing. The new plan will not unfortunately roll back or compensate for austerity measures like cuts in government finance and increases in consumption taxes and rates (Hydro-Québec heritage pool unfreeze).

The details of the plan

What we’ve been presented with is a nearly $2-billion investment plan. The aim is to create within the next three years 43,000 new jobs in comparison with what had already been planned. To do so, the government initiates the following:

Québec has lost 45,400 jobs between January and August: that’s why the government is trying to seem so proactive on the issue. Especially if, as rumour has it, campaign buses are about to roam the province. 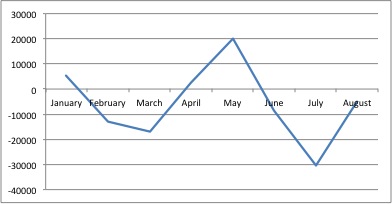 Three elements stand out in this plan: 1) the government’s decision to bind more tightly labour training to the market’s needs, 2) the idea that enhanced business performance translates into jobs and higher wages, and 3) the goal of finding outlets for our surplus energy. Oddly, all three elements are reminiscent of the preceding government’s priorities.

Beneath the ministry’s subdued language, developing a knowledge-based society relying on skilled labour translates into two things. First, that knowledge is but an extension of the economy and, secondly, that training programmes should be first and foremost aimed at meeting the fluctuating and temporary needs of certain sectors of our economy (e.g. the gaming industry, the pharmaceutical industry, etc.).

Regarding businesses: nobody can object to enhancing their performance. However, for the last thirty years, increased Québec business performance —as measured by productivity gains— has not benefitted the whole population. IRIS showed two weeks ago that whilst the wealthiest 1% has greatly profited from these gains, the majority’s earnings have not followed suit. For instance, Québec wage-earners have been systematically falling behind for the last thirty years, for an annual $6,000 revenue shortfall (when the evolution of their compensation is compared to that of productivity).

Finally, top of the list in this plan is the government’s electric vehicle strategy. This is obviously a novel and interesting idea. Québec overproduces electricity, and such an initiative to use the resource to implement transportation networks, like monorails and extending metro lines, should certainly be applauded. However, despite the project’s green credentials, it remains unnerving to realize that it could be carried out by overexploiting and disfiguring our land.

It might also be worth noting that the current government is still planning to open up the North of the province to mining companies and the door to extracting oil from Anticosti Island… In the end, the economic policy’s environmental perspective is worth little more than the paper on which it was printed.