Prescription for change: the case for a national drug plan

Canada is the only country with public health care and no national drug plan. This means that 24% of Canadians have no coverage for medications prescribed by their doctor. 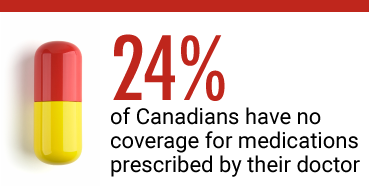 We need a national drug plan that takes care of everyone. Tommy Douglas, founder of Canada’s universal Medicare system, didn’t intend for public health care to include only hospitals and doctors. This was intended to be just the beginning, with coverage of drugs and other services to follow.

Our current patchwork of provincial programs and work-based plans means that access to drugs depends on where you live and where you work. Most Canadians are covered by private drug insurance plans through their jobs. These plans vary enormously and are lost if the worker quits or is laid off, and sometimes even when he or she retires. But for the 24% of Canadians with no coverage at all, the cost of medications falls to them alone. This could mean thousands of dollars annually on the backs of those without workplace coverage.

Last year alone 1 in 10 people in Canada did not fill a prescription because of the cost. This leads to people taking lower than prescribed dosages or not taking their medications at all. In many cases this will compromise a person’s health and cause their return to the hospital for further care. This lack of care puts the patient’s health at risk and increases the unnecessary strain on the hospital system. 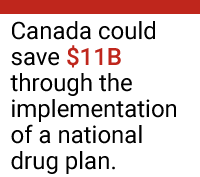 The current patchwork of plans does nothing to restrain drug costs. Not only do work-based drug plans provide limited benefits and little security, administering thousands of different plans is expensive and inefficient. In addition to saving administrative costs and choosing safer, less-expensive well-established drugs, a national drug plan would allow for bargaining with the pharmaceutical companies to pay lower prices for drugs.

Canada could save $11B through the implementation of a national drug plan. A national drug plan would also be able to work with the medical profession to improve prescribing practices by giving doctors independent information on the value and benefits of the treatments they’re considering.

A national drug plan must:

Without a national drug plan, Canadians will continue to pay some of the highest prices for medications in the OECD while many families face the financial strain of covering these costs. It is no longer acceptable to provide access to physicians but not the medications they prescribe.

For more information about a national drug plan, visit Canadian Health Coalition's new website Healthcare for All, or the CCPA report The Economic Case for Universal Pharmacare (2010).

Melissa Newitt is a CCPA Research Associate and the National Coordinator (Interim) of the Canadian Health Coalition. You can follow Melissa on Twitter @melissanewitt.