Postal workers: people in your neighbourhood

"Sadly our loving dog of 14 years has died. We received many kind notes from friends and acquaintances. Our letter carrier just noticed the dog's rope was gone and knocked on the door to offer his condolences. What’s that worth?"

There are a host of reasons (some of them explored here) why the decision to eliminate door-to-door delivery across Canada was short-sighted, fiscally suspect, and wrong-headed. Post-election, the conversion plan has been placed on indefinite hold, but questions remain about what can be expected: a moratorium on reforms, or a return to door-to-door delivery for those who lost their service. And certainly the debate continues about service expansion (which apparently even Canada Post can get behind from time to time—after all, ‘tis the season!).

But too often what gets lost in the discussion is the human element—the ways in which neighbourhoods are made better, safer, more connected places because of the daily presence of those workers who provide eyes on the street and who are part of the rhythm of the community.

Which is why the now-on-hold decision to eliminate door-to-door delivery is one element of a much broader debate. 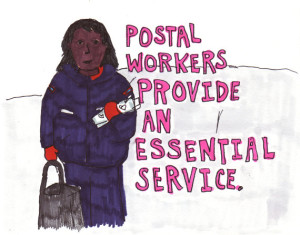 There’s no question that a less “demanding” (or perhaps “entitled”), more “flexible,” market-friendly workforce, unconcerned with “obstacles” like job security or workplace benefits or a pension, is one of the fallouts—some might say the goals—of austerity.

There’s also little doubt that one of the longer-term effects of the austerity agenda and the rise of insecure work has been the undermining of community, and of our ability to create, reinforce, and enjoy basic human connections.

The rise of the precariat, and the resultant insecurity about income and work, places enormous stress on family relationships, friendships, and community interaction, as the research team at the Poverty and Employment Precarity in Southern Ontario Project (PEPSO) uncovered in their eye-opening analysis. It’s proven to be a huge obstacle for anyone planning for the future, which means that things like starting a family are often postponed.

Precarity has also made it much more difficult for families to schedule events, spend time together, or make commitments to volunteer. Additionally there are clear links to depression and a sense of isolation, as well as self-doubt and anxiety, often as a result of income stress.

In short, according to PEPSO, precarity affects “how we contribute to our economy, give back to our community and interact with our families…and makes it less likely that people will have vital social networks, such as friends to talk to.”

So in light of these attacks on community, a little more criticism would be helpful when cuts to Canada Post are framed by the corporation and free-market champions not as a straight-up service reduction, but rather as a way to make neighbourhoods more family-friendly and neighbourly.

Let’s recap: on the one hand, the austerity agenda is undermining our ability to forge or maintain a sense of community with our neighbours (or, in some cases, with our own relatives); on the other, austerity-induced cuts will—according to those wielding the knife or cheering them on—enhance community by making people not only fend for themselves, but also care for those whose need for accommodation inconveniently conflicts with the decision to cut services.

Who knew that the human connection being undermined by austerity’s cost-cutting refrain could be repaired merely by eliminating our day-to-day (and door-to-door) contact with superfluous humans?

Those big metal things at the end of the street? They’re not Superboxes or, I don’t know, mail dispensing machines. They’re Community Mail Boxes. (“Part of the Canadian landscape,” according to Canada Post’s spokesman, somewhat Group-of-Seven-esque.) Think of them as community centres, except without the services. Or activities. Or people.

And, contrary to pretty much anything resembling logic, cutting door-to-door mail delivery isn’t going to hurt seniors and people with disabilities. The corporation says it’s actually an opportunity for people already treading water in an insecure job market to get to know their elderly neighbours by volunteering to pick up their mail during inclement weather.

Let me repeat: somehow, eliminating door-to-door delivery will bring people together in a way that the postal worker who regularly put out the garbage cans for one of the elderly people on his route never could.

Eliminating door-to-door delivery will manage to stem the anti-community tide more than the postal worker who was so trusted by one person on his route that he would feed her cats when she was away.

Replacing door-to-door delivery and letter carriers with Superboxes will make us a more compassionate, connected, and humane society than before, when that same postal worker saved a woman’s life by calling the paramedics when she collapsed.

Human connections are not strengthened by eliminating humans—through attrition or otherwise. And when families and communities are finding it increasingly difficult to remain healthy and connected as a result of austerity-driven precarity in the workplace and in life, we need to strengthen, not cut back on, agents of human connectedness.

“His route was his village” is how one much-loved and now deceased postal worker was described.

To confront the soul-sucking and community-killing aspects of austerity, we need more villages, not silos. And, when it comes to the people—all the people—in our neighbourhoods, certainly not Superboxes.

(With special thanks to Joe Fiorito.)