Political Apathy and Voter Suppression: Who are the real slackers?

No, it’s not rising inequality. Or stagnant incomes. (That growing gap between the rich and the rest of us is so last week.)

A decimated workforce? Aboriginal poverty? Public sector layoffs? The attack on worker rights? Not even close.

Do none of you read the papers? The real issue—the one we need to spend acres of newsprint agonizing over—is the sorry state of our youth (just ask Margaret Wente or Bill Morrison).

Not the shrinking pool of labour opportunities. Not the unacceptably high levels of youth unemployment. And certainly not the systematic underfunding of higher education. No, the real problem with youth today is their lack of drive. Their disengagement. Their disregard for the political process—after all, look at their abysmally low levels of voter turnout.

Want more "proof"? A few self-declared pundits are only too eager to cite their “questionable” purchases (generally Apple-related). Or their inability to have started saving for university when they were 10. Or their obsession with facebook and twitter and texting. And then there's that whole LOLcats thing.

I have to admit, I’m finding this whole “kids these days” theme awfully tiresome. And, frankly, disingenuous.

I’d actually like to take a different perspective entirely. 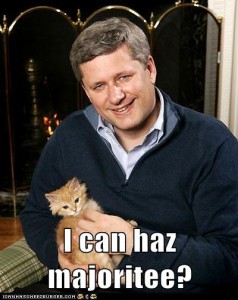 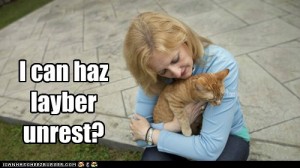 Rather than jumping on the hand-wringing bandwagon about disinterested, apathetic youth,  I’m more concerned about pervasive and consistent government apathy towards youth.

After nearly two decades of governments insisting that rather than solving problems, they themselves were the problem, we are witnessing the coming-of-age of a generation that has only known self-loathing governments; governments for whom the creation of a truly national program is either an abomination or a last-ditch effort at self-preservation; governments that increasingly ask to be judged based on how little they impact our daily lives.

Unless, of course, they’re slashing the funding of organizations that inconvenience their agenda but provide a lifeline to marginalized populations. Or seem a bit too “public mandate-y”. Or Trudeau-y. And those groups that are a little too effective at reminding us of the toxic soup we’re leaving our grandchildren to flounder in? Ummm, like, STFU.

I know, right? Cause that Suzuki guy is such a buzzkill.

And where governments might play a tangible and positive role in the lives of young people—like in child care or affordable post-secondary education or a strategy to address unacceptably high levels of youth unemployment—the reaction is decidedly apathetic. In a “smell ya later” (in about 40 years, when you’re more likely to vote Conservative) kind of way.

Instead, this government seems perfectly content to let young people and their families bear the ever-increasing burden of the cost of higher education while job prospects and starting salaries remain alarmingly low. Or wander in hyperlink limbo trying to locate that much-touted online replacement for closed Youth Employment Centres. Or play patchwork lottery when it comes to finding affordable child care options.

This may be the Can-Con version of tough (political) love. But it’s hardly the appropriate response from elected representatives with a public mandate.

Can we really expect young people to get excited about participating in a system that, according to the very people representing it, has no real responsibility to ensure our collective well-being?

Looking for democratic dialogue? Nothing to see here, kids. Shouldn’t you be downloading an app or something?

Interestingly, youth voter turnout levels are higher in Quebec than in the rest of Canada, according to at least one national survey. I suspect it may be that Quebeckers have a much more tangible relationship with governments through a more robust slate of services that are provided publicly—a provincial child care system, for example, or a higher education sector that’s more accessible (meaning public) than those in other provinces. Could this be why young Quebeckers feel more invested in the political process?

Political activism is not just limited to party politics, of course—currently the largest student strike in Quebec's history over tuition fee increases is clear evidence of deep political awareness and involvement from this so-called “apathetic” generation.

No one could accuse Quebec youth of disengagement or a lack of interest.

Instead, they get called spoiled entitlement addicts.

But we can’t have it both ways.

We can’t moan about youth apathy (at the polls, that is) when this is a fairly predictable response to policies and rhetoric designed to reinforce the message, particularly to young people, that government is not just invisible, it’s ineffectual. Welcome to the real voter suppression.

And when youth take action (often in record numbers) in response to government decisions and policies, with imagination, passion and perseverance—inside or outside the party politics frame—we can’t call them privileged brats for daring to think that they deserve, and are in fact entitled to, a say in the political decisions that shape our lives and theirs.

We do have serious structural and systemic problems that need to be addressed immediately. But youth apathy is not one of them.

It’s time to call out the real slackers.