This past week, public policy proposals were piling up fast and furious as each political party vies for the attention of voters rightly concerned about stalled wages and rising living costs—pledges that ranged from first-time home buyer incentives, to caps on cell phone fees, to the relaunch of the children’s fitness and arts tax credits and making post-secondary tuition free.

These duelling pitches underscore some profound differences between the parties in their thinking about families, gender equality and the types of policies best suited to deliver meaningful support—and raise equally important questions for voters to consider. Namely:

The Conservative Party is promising to bring back two Harper-government tax programs to increase a family’s after-tax income: the children’s fitness tax credit and the children’s arts tax credit—a potential value of up to $150 and $75 per year, respectively, for parents with kids under 16, and to introduce a new non-refundable tax credit of 15% for maternity and parental leave claimants. It is also proposing to enhance access to the Disability Tax Credit, including for children.

The platform also includes a promise to increase the Canadian Education Saving Grant (CESG) from 20% to 30% for every dollar invested up to $2,500 a year in a Registered Education Savings Plan (RESP)—and increase the lifetime maximum CESG amount from $7,200 to $12,000. Taken together, these RESP proposals would cost the federal treasury about $600 million a year in lost revenue.

In 2015, the then-new Liberal government combined many existing kids tax credits into a new tax-free Canada Child Benefit (CCB), increasing the total amounts available and targeting the largest payments to low- and modest-income families. The Liberal Party has promised that, if re-elected, they would increase the CCB by 15% (or up to $1,000) for children under the age of one, and double the Child Disability Benefit (CDB) from a maximum of $2,832 to $5,664 for each child who is eligible.

The Liberals are also proposing to make maternity and parental leave benefits tax-exempt at source (see David Macdonald’s analysis of these dueling proposals) and to introduce a 15 week leave for parents who adopt children. They’ve pledged to create a new Guaranteed Paid Family Leave program to ensure that new parents who currently don’t qualify for Employment Insurance (EI) benefits will have support through the first year of their baby’s life. These measures are expected to cost $800 million in 2020-21, rising to $1.2 billion by 2023-24. An additional $500+ million is being set aside to fund the enhanced CDB.

The New Democratic Party has promised to bring in new legislation to enshrine Canada’s commitment to high-quality, public child care, beginning with an investment of  $10 billion over four years to create more than 500,000 licensed spaces in collaboration with the provinces and territories and Indigenous governments.

It will also take steps to make it easier to qualify for maternity and parental leave benefits by introducing a universal qualifying threshold of 360 hours for the Employment Insurance system, and continue to support programs that allow women to build careers in nontraditional fields.

The Green Party has also promised to ramp up child care spending to meet the international benchmark of 1% of GDP to create a universal and affordable early learning and child care system that supports children’s developmental needs and women’s participation in education and paid employment. And the party has promised to eliminate the GST on all construction costs related to child-care spaces.

The Liberals’ child care plan provides for the creation of up to 250,000 before- and after-school spaces for kids under the age of 10, 10% of which will be set aside to meet the needs of parents working overtime or irregular hours. The platform also promises to lower fees by 10% across the country and to invest $25 million per year in training for early childhood educators. This would cost $535 million each year starting in 2020-21, resulting in an additional investment of $4.3 billion by 2027-28, yet considerably short of what is needed to create a system that serves all children.

Canada’s history of support for children and families dates back almost 100 years, as does the pitched debate about the best goals and design for these programs.

This election, the Conservative Party is promoting “cash for care” tax expenditures, reflective of a private responsibility, “hands off” approach to social policy.  This approach—directly rewarding the (usually traditional) family unit with income to spend as they please—is populist in appeal and, as currently designed, offers up the greatest value to families at the top of the income scale who are best positioned to take full advantage of these tax-funded opportunities.

For example, not only are higher income families more likely to save for their children’s education, the value of their savings is predictably higher than lower income families. Indeed, the gap in the average RESP holdings between families in the bottom income quintile and those in the top has been growing over time. The proposal to increase the value of the Canada Education Saving Grant to 30% and the more modest increase to the income-tested Accelerated Canada Education Saving Grant will only reinforce this disparity and does nothing to enhance the affordability or accessibility of the post-secondary system itself. 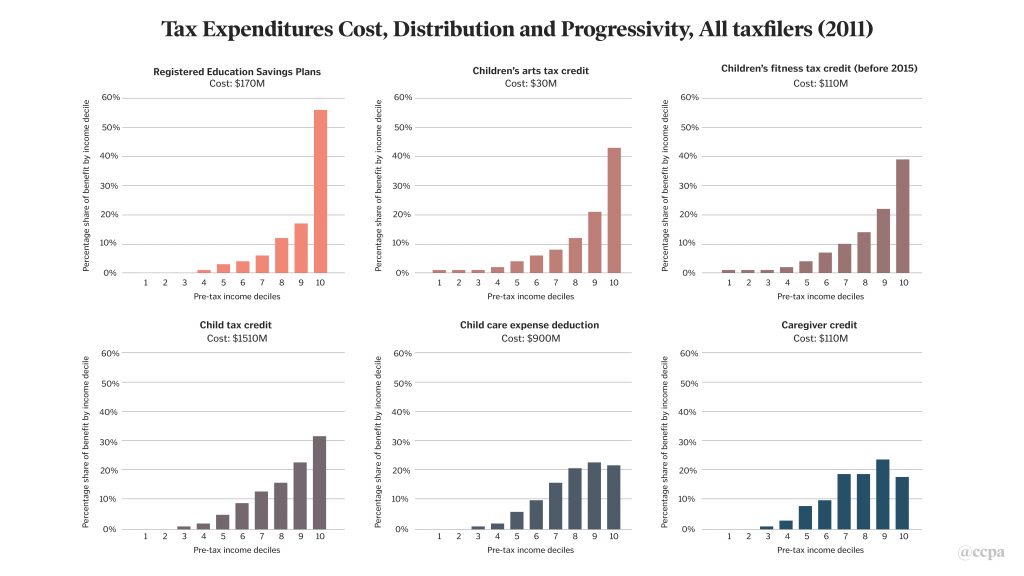 Source: David Macdonald (2016), Out of the Shadows Shining a light on Canada’s unequal distribution of federal tax expenditures. Canadian Centre for Policy Alternatives. Note: These figures include all taxfilers, including those that claim the individual credits or deduction and those that do not. Click to enlarge image.

The proposed tax credits for fitness and arts programming (at a combined cost of $300+ million) also deliver the largest benefit to high income families—effectively rewarding parents for paying for lessons that they would have paid for anyway. Research found that the first iteration of these programs were not actually effective in spurring greater participation in physical activity or the arts.

The commitment to build a universal child care system offers up much needed support for all children and families, while stimulating economic growth through increased employment, household spending, and tax revenues. Child care is also critical for women who continue to provide the lion’s share of unpaid work and care and, as a consequence, face the largest challenges and the steepest economic penalties juggling work and family.

Canada has a serious shortage of regulated, affordable, inclusive high quality child care services. In 2018, there were 2.3 million children under the age of six, and 630,000 regulated, centre-based child care spaces in Canada for this age group. Barriers to access are especially high for Indigenous communities, children with disabilities, infants, rural communities, and parents employed in non-standard jobs.

Offering cash incentives to parents—inevitably too small—won’t fix this problem. If this was so, we wouldn’t be in the situation we are today.

The other potential game changer in this election is the proposal to expand access to Canada’s maternity and parental leave system to families that currently are shut out of the EI system, a glaring flaw since the program’s inception. Quebec showed the way in 2006 by setting up its own universal system. A Guaranteed Paid Family Leave promises to provide more effective coverage for all new parents, taking into account the realities of today’s labour markets and caring needs of families.

What’s at stake for women?

It’s difficult to imagine how we can bring about meaningful change for families and advance gender equality without the resources and the will to make it happen.

The different policy options on offer, of course, aren’t inherently progressive or regressive. Rather it all comes down to their vision and design, which is why it is so critically important to unpack the ideas about gender, family and government that inform each proposal—and to look at what kind of money is on the table.

We also can’t forget that the family policy debate is taking place against a backdrop of new tax cut proposals targeting the middle class. Both the Conservative and Liberal parties are proposing broad-based tax cuts that will shrink the federal purse by roughly $6 billion when fully implemented.

Leaving aside the question of whether tax cuts are the best strategy for putting money into people’s pockets, what we do know is that tax cuts are not a gender-neutral policy. Women and girls lose out from the cumulative impact of tax cuts twice, first when they lose access to essential public services due to insufficient revenues/funding, and secondly, when they are forced the fill the gaps with many hours of unpaid caring work.

More generally, the drive to reduce taxes undercuts the ability of government to raise needed revenues to deliver high quality services and supports fundamental to the advance of gender equality. To truly close the gap for women and level the playing field for families, we need the right mix of policies and programs and the resourcing to make it happen.