The announcements are coming fast and furious now. The latest today from the Conservatives promised to “review” the mortgage stress test and lengthen amortization periods for mortgage loan insurance for first-time buyers. It seems that the NDP might also be in favour of 30-year amortizations, based on a statement from early this year. So consider this one of the few NDP/CPC joint platform crunches.

Briefly, the federal government, through the Canada Housing and Mortgage Corporation (CHMC), provides mortgage insurance to qualified families who don’t otherwise have the 20% down payment required to buy a house. In order to get that insurance families have to qualify. By changing the rules, the federal government can let more or fewer families access this important service. Since the housing crash of 2008, federal governments have generally tightened CMHC requirements so as to avoid a U.S.-style real estate implosion. Of course, tightening the rules makes mortgages harder to get or more expensive, but usually both. In a campaign that’s all about affordability, there is a clear temptation to loosen CMHC’s rule to improve affordability. But there is another side of the coin.

The graph below shows the mortgage debt that various age groups held both in 1999, before the real estate price boom, and in 2016 (the most recent data available). This looks only at mortgages on principal residences and only includes those families with a mortgage. It is not surprising that the younger you are, the larger your mortgage is likely to be in 2016. Those already in the housing market in 1999 saw a huge increase in housing prices, providing lots of equity for future house purchases and also decreasing the need for mortgage debt to finance it. If you weren’t in the housing market in 1999, you’re going to need a big mortgage to afford a house. In 2016, it was thirtysomethings who held the largest average mortgages at $234K, although there really isn’t much difference between those in their 20s, 30s or 40s. Older age groups did see mortgage debt rise, but by much less than younger families. (The burden of high housing prices falling on middle-class young families in the form of debt is something I’ve looked at before.) 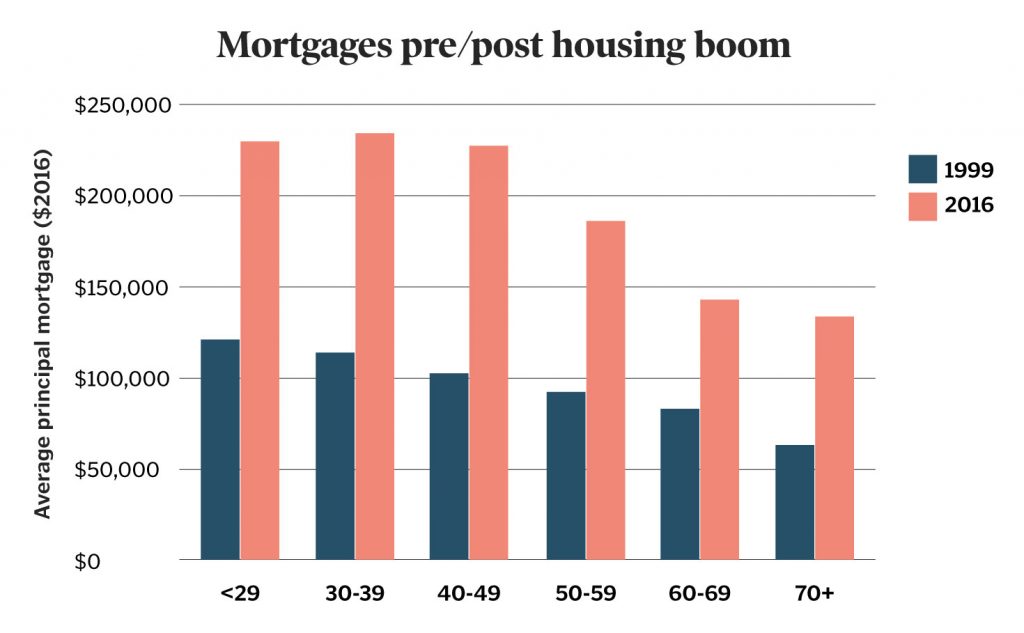 The increase in mortgage debt since 1999 for younger families has been enormous. Those in the 30-39 age bracket today carry $120K more in mortgage debt than thirtysomethings did in 1999; for those aged 40-49, it’s $124K. The kind of federal policy changes described above would make it easier to rack up even more debt, since first time home buyers are in exactly these age groups. Longer amortization periods or making the stress test easier to pass would certainly allow more young families to buy a house, but only by leveraging them even more. In a basic sense, this doesn’t differ dramatically from the Liberal’s CHMC equity stake announcement from the last budget, which also gets debt to more young families.

Young families entering the housing market today are the ones who are being sideswiped with debt to pay sky-high home prices. We’ve got to come up with better solutions to the housing crisis than ever-higher levels of debt.