Duelling platform planks appear to be a theme in this election.  My last blog looked at CMHC mortgage insurance changes endorsed by both the NDP and the Conservatives. Today’s analysis looks at the Liberals’ and Conservatives’ proposed versions of non-taxation of EI parental benefits.

The Conservatives want to offer a non-refundable tax credit for the value of the EI parental and maternity benefits, similar to the deduction for tuition, at a credit worth 15% of the amount.  Fifteen percent is also the lowest tax bracket value (which the Conservative platform plans to change but for the purposes of this analysis I’ll set that aside for now), which means that in most cases the taxes on that EI parental benefit would already be paid.  But if you don’t get any EI parental benefits, or you weren’t otherwise going to pay tax on them (because you had other deductions), this credit doesn’t help you.

Unused amounts of the credit can be carried forward, as with the tuition credit.  I didn’t model that here, as it gets much more complicated to figure out the distribution, but the PBO has worked out the straight dollar values which could increase the benefit by up to a third.  However, who actually gets that extra third isn’t clear without more modelling.

On the face of it the Liberal plan seems similar to the Conservative proposal, but because the PBO didn’t specifically model it, there may be differences. The Liberal platform commits to making EI parental & maternity benefits non-taxable, which sounds straightforward but in practice could mean different things. If it means literally making all EI parental and maternity benefits “non-taxable,” it could actually cost more than the Conservative plan, because the benefit would be the value of the EI benefits multiplied by the top marginal rate of the individual.  While in most cases, that would be 15% (the tax rate in the lowest bracket because the recipient is on leave) it could potentially be much higher.  For a well-paid employee who receives a top-up to their EI at 93% of their original salary of, say, $200K a year, the top tax bracket would be 29% (the 4th bracket) and they could see a much bigger benefit.

However, if the Liberals mean they’d give each recipient a non-refundable tax credit, but wouldn’t have Employment and Social Development Canada take off any tax when they sent out the EI cheque, then the program would be identical to the Conservative proposal, with the exception of the carry-forward.

To determine the distribution, I’m using (as always) Statistics Canada’s tax modelling software SPSDM, this time with some custom changes.  It runs a sample of Canadians through any modified tax system to see who benefits or doesn’t from a specific proposal. For the purposes of this analysis I’ve done it by census family because the person receiving EI will likely have much lower earnings since they’re, by definition, off work (incidentally, if the unit of analysis is by individuals rather than by families, the distribution is similar).

Interestingly, families with infants are not evenly distributed along the income spectrum, largely because they are more likely to be older and more likely to have more than one earner. A family with infants (that haven’t turned age two) has a greater likelihood of being in the middle or the upper end of the income spectrum for families or people living alone. This is a fact worth keeping in mind. 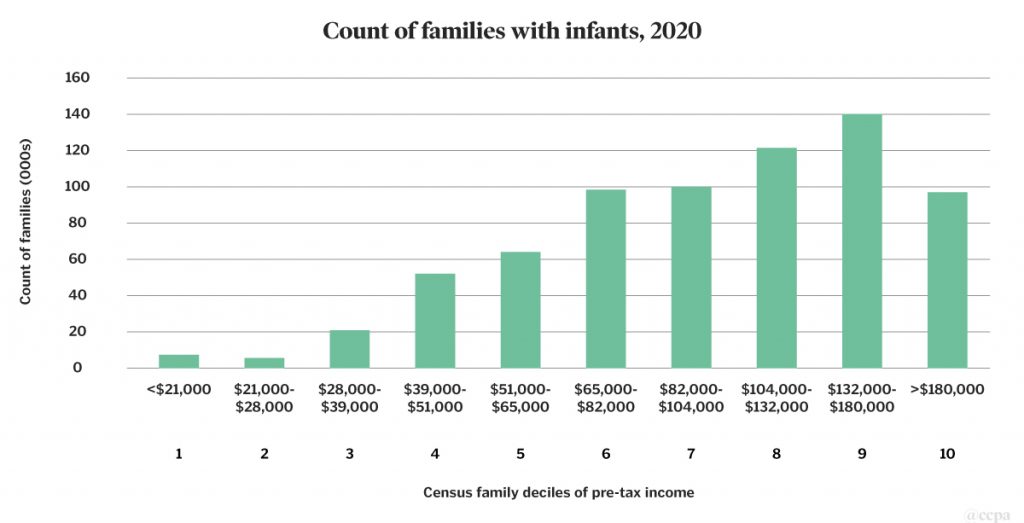 Here is a comparison of the Liberal versus the Conservative plans on EI parental/maternity non-taxation.  It demonstrates that non-taxation of EI parental benefits (the Liberal plan) provides much more benefit to higher income families as that non-taxation is evaluated at the top marginal bracket and could therefore be worth on average upwards of $1,800 per family for the richest families.

The Conservative proposal also provides far greater benefit to higher earning families, topping out at on average $1,170 a family for the 9th decile (the top decile actually makes slightly less).

Neither the Conservative nor the Liberal plan makes much difference to families at the lower half end of the income spectrum. 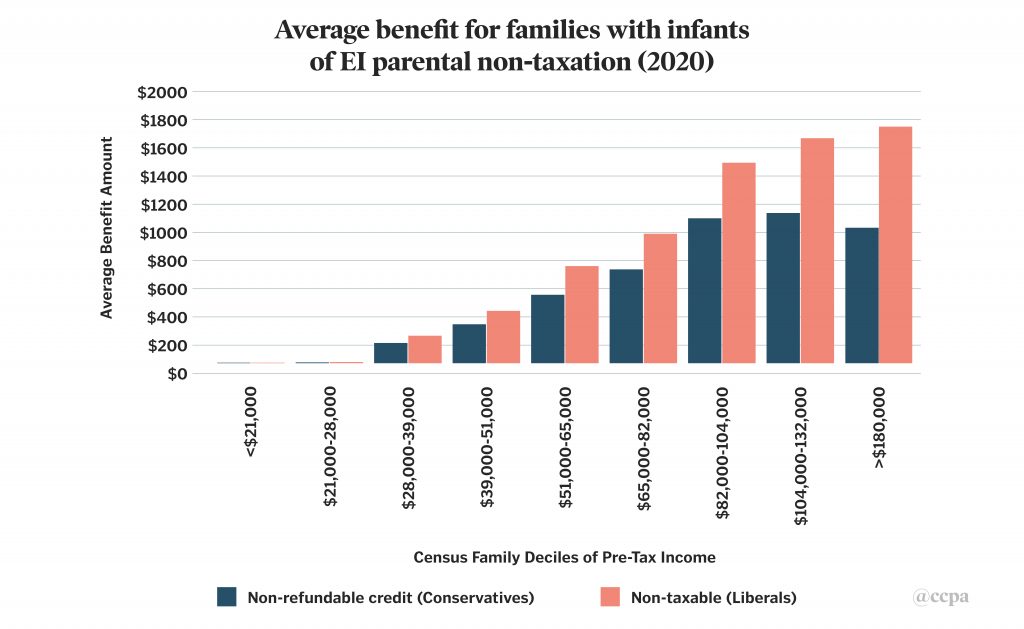 When we look at distribution, the Liberal proposal provides almost a quarter of families with over a $2,000 benefit, while the Conservative proposal provides that top benefit to only 14% of families.  The benefit to other income categories are largely similar across both parties’ plans.  For both proposals, almost 50% of families with infants receive no benefit from EI non-taxation, which may initially seem counterintuitive. However, this requires a closer look. 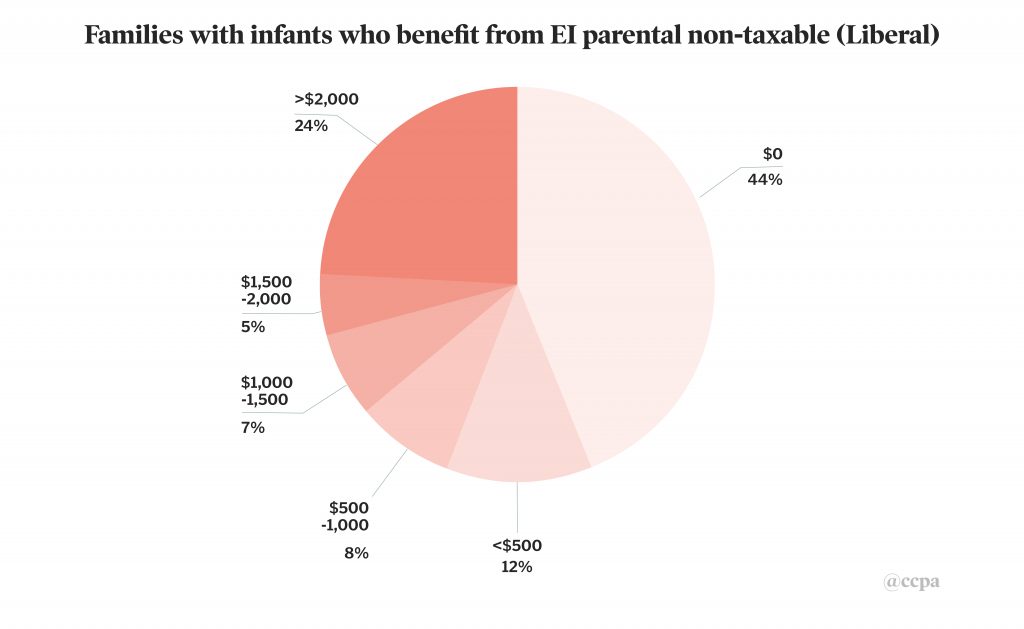 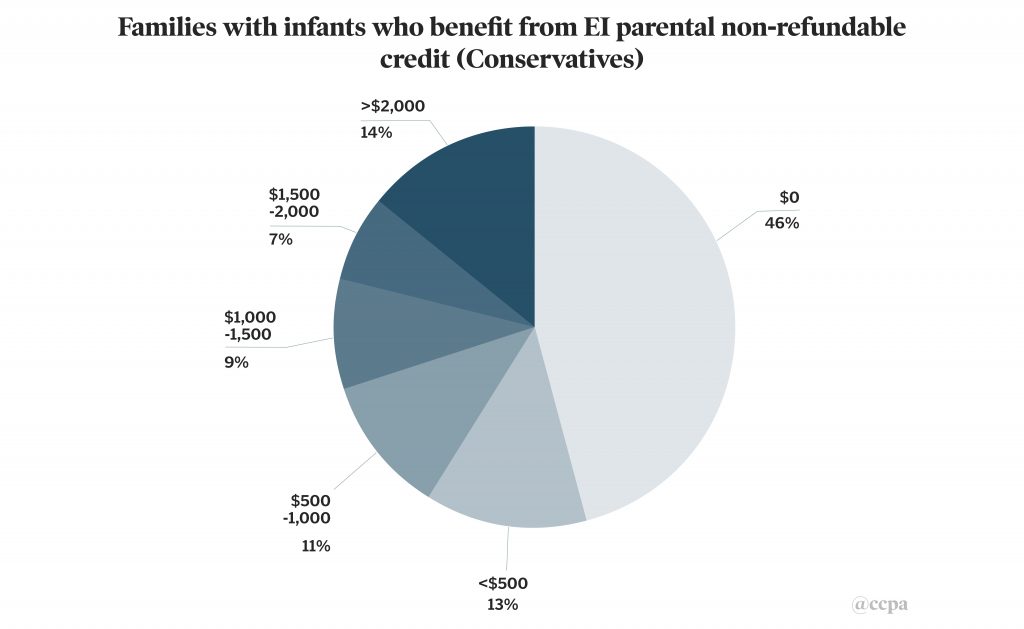 The final figure should provide necessary clarification: outside of Quebec, almost 40% of families with infants don’t collect EI. (In Quebec that proportion plummets to 2% due to their more generous QPIP version of EI.) There are different reasons for this lack of take-up in the rest of Canada: part-time workers often haven’t accumulated enough hours to qualify for EI. Or, because EI is only 55% of a worker’s earnings, it may provide an insufficient income to live off of, so that person may have to return to work. But in short: No EI? No benefit from a tax cut based on EI.

In most of Canada, a large swath of parents with infants are simply left out of the EI program, which means that, regardless of the structure of the proposal, tax cuts on EI benefits aren’t of much use.  A more effective approach for those families would likely resemble a Quebec-style system, with a floor on how much EI people receive irrespective of hours and whether they work minimum wage.  Unfortunately, neither the Liberal nor the Conservative party platform commits to that immediately, although the Liberals have said they would study it with the provinces in their platform. 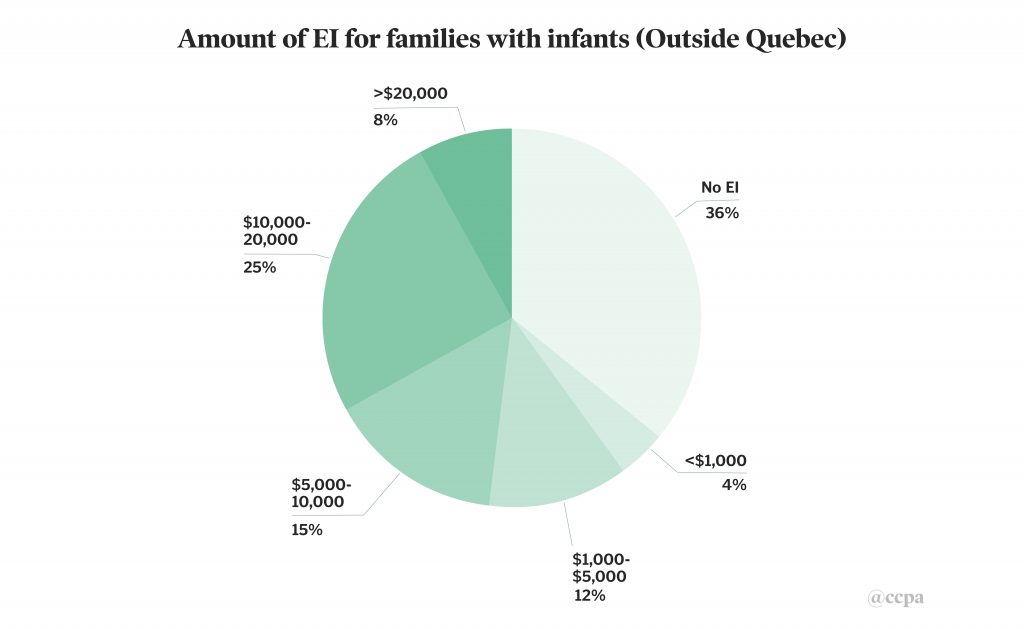