Permissive Parenting: Are We Raising a Generation of Corporate Brats?

When it comes to parenting, everyone’s an expert. And society loves to jump all over the latest media-feted example of overly indulgent parenting of kids of all ages—from toddlers to millennials.

Sure, all parents make mistakes, and all kids have meltdowns (some of which might have, admittedly, been handled better).

But it seems to me that even the worst examples of permissive parenting pale in comparison to the way politicians and pundits coddle, make excuses, and encourage double standards for questionable (even deplorable) behaviour from corporations and their representatives.

And perhaps it’s the post-holiday sugar-and-excessive-consumerism hangover talking, but I’m tired of being held hostage by self-indulgent, narcissistic tyrants, whose endless “gimmes” and “I want that…or elses” seem so utterly pervasive that I feel as though I’m trapped at a Toys "R" Us outlet sale (whereupon, after my third coffee, I discover the washrooms are out of order).

These days it seems the capitulation-impulse is so hair-trigger that often the actual demands (“Cut your salaries in half or I’m running away to Indiana where they just approved Right-to-Work!”) aren’t even necessary. It’s the anticipation of the demands—or fear of the consequences to be suffered if the unvoiced demands aren’t met—that results in a smorgasbord of pre-emptive tax-cut-esque goodies in an attempt to avoid the surely inevitable breath-holding tantrum. (Or reneging on job commitments—am I right, U.S. Steel?)

There’s minimal public sympathy for the enraged and hysterical four-year-old who barricades himself in his room after screaming at his sister to get out so he doesn’t have to return her Lego—feeling pretty confident that their parents will side with him, anyway. But somehow the “grown-up” version of a corporation—let’s call it Canada Post—that locks out its workers and waits for the government to intervene instead of allowing the collective bargaining process to continue is the recipient of benevolent nods from media pundits because “really, what choice did they have?”

And after all the excuses about “shareholder demands” are stripped away, the corporation that socks away all that money from tax breaks instead of investing it in workers or equipment looks an awful lot like that kid who, when asked to play nice, takes her Pokemon cards and stomps home.

Well, if the Pokemon cards were paid for by the public.

And if she had pocketed a few million of them.

And if by "home" she really meant the Caymans.

But it goes beyond capitulation. It’s the excuses or justifications so many of our politicians and pundits make for questionable corporate actions—excuses that are too-often accepted as Just The Way Things Are Because It’s The Free Market, After All. 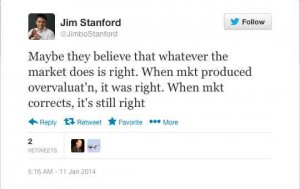 It’s the insistence that in this case a double standard is warranted (because public assistance makes low-income families lazy….but corporations more innovative).

It’s the steadfast refusal to acknowledge that bad behaviour should have consequences; that corporations are required to negotiate fairly and should not expect governments—like doting helicopter parents—to constantly remove all obstacles in the path of profit; that ultimately by allowing rules to be bent or broken with near-impunity we are setting very dangerous precedents and ensuring that the cycle of toddler-like consequence-free behaviour will continue.

In fact, I’d say that a lot of die-hard "free-market" defenders could really, really benefit from a basic refresher in Parenting 101: “are you spoiling your kids?” You know: how to set limits, be consistent in applying consequences for bad behaviour, avoid double-standards, take off the rose-coloured glasses, and not give in to threats.

Still unconvinced that ignoring or even rewarding bad behaviour exacerbates the problem? Ask any exhausted parent after day-care pick-up pushing a stroller through the vegetable aisle while mentally trying to prepare a week’s worth of family menus and peanut-free school lunches and hoping they can get home before a bathroom break is requested. They probably have a book you can borrow.