“The total tax bill, which includes all types of taxes, has increased by 1,886% since 1961,” concludes the Fraser Institute in its 2015 Canadian Consumer Tax Index. Even if the estimation is sound (a big “if”), the tax surge can only be true when inflation is totally ignored. It’s a bit like saying we can all fly if we just pretend gravity does not keep us grounded.

The Fraser Institute’s annual Consumer Tax Index has drawn extensive criticism from Canadian Centre for Policy Alternatives economist Iglika Ivanova, with her latest analysis available here. A complete demolition of the think-tank’s various claims on taxes written by Professor Neil Brooks was published a decade ago. Nonetheless, the Fraser Institute continues to release its flawed index year after year, and the press keeps reporting it as news. This year, the Globe and Mail and the National Post ran stories on the 2015 tax index without once challenging the validity of its claims.

The Fraser Institute actually knows that by ignoring inflation its conclusions are an illusion. For example, at the bottom of Table 3 of its study (pictured), the authors calculate the tax change in real terms over the past half-century to be 149% (i.e., not the 1,886% reported in the news).

That is still a big jump. But just looking at a percentage like that without proper context creates a false impression about how taxes have changed over the past five decades. One possible way to test the Fraser Institute’s claim of a ballooned tax bill is to take a look at the portion of taxes in terms of income and how much that portion has changed over time. 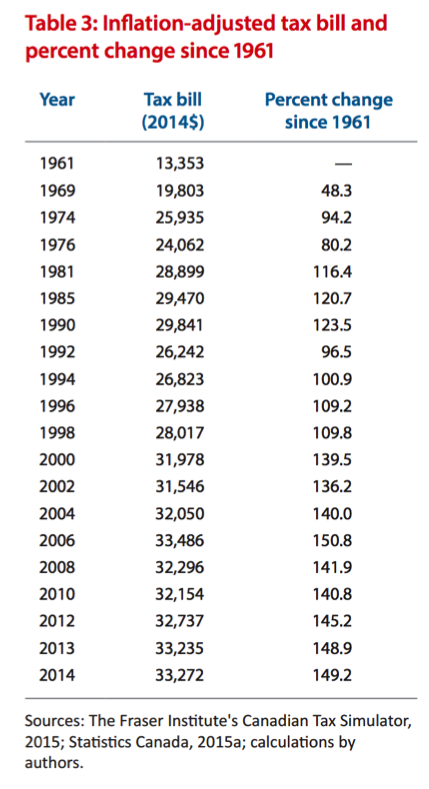 In contrast with the Fraser Institute’s claim of a runaway tax bill, taxes paid as a portion of income appears to be remarkably stable, even based on the institute’s own tax data.

The Fraser Institute attributes 31% of all taxes to income taxes. So if there is any ballooning happening it should be noticeable in the amount of income taxes collected. Of course, over the past decades, Canada never experienced anything like a surge in income tax revenues of the magnitude claimed by the Fraser Institute, so we won’t belabour the point. As a simple illustration, let’s take a look at implied personal income tax rates from Statistics Canada. In 2011, the rate was 16%, compared to 15.5% in 1976.

The attention-grabbing pitch of a ballooning tax bill calls the legitimacy of taxation in society into question. “While taxes help fund important government services, the issue is the amount of taxes that governments take compared to what we get in return,” said Charles Lammam, the director of fiscal studies at the Fraser Institute, in the announcement of the 2015 index. “With 42 per cent of income going to taxes, Canadians might wonder whether they’re getting the best value for their tax dollars.”

Even with the help of taxation that the Fraser Institute calls excessive in their very imaginative way, the gulf in income share between the top and bottom of the income distribution remains wide and deep.

Tax is the price we pay for civilization, as former U.S. Supreme Court Justice Oliver Wendell Holmes once said. What we as a society should ask is not whether the average taxpayer is paying too much, but instead how all top-income earners can be persuaded to pay what they owe society.

Thaddeus Hwong is an associate professor at the faculty of liberal arts & professional studies at York University, an adjunct senior research fellow at the department of business law and taxation at Monash University in Australia, and a CCPA research associate. This commentary benefits from insights generously shared by Professor Neil Brooks, with whom Hwong worked on statistical graphics for the Brooks report referred to above.