Onward and (Next) Upward 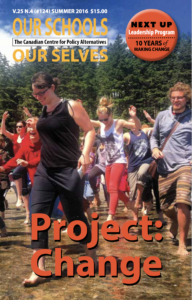 Read the Summer 2016 issue of Our Schools/Our Selves

There is no question that disillusionment with the electoral process and democratic institutions is approaching a breaking point, on an international scale, and manifesting itself in radically different ways, from deeply progressive to dangerously regressive.

We saw it in Greece (when Syriza was elected on a platform based on an alternative way forward, and brutally penalized for it by the IMF) and (to somewhat of a lesser extent) in Spain with Podemos. It’s happening in the UK with Brexit, and the ensuing rise of (deeply contradictory, given Britain’s colonial history) anti-immigrant sentiment. And the world is fixated on how it’s currently playing out, in cartoonish slow-motion, in the U.S., as Trump, with his mix of faux-populism and brown shirt-ism, inches ever-closer to the GOP leadership; and as Sanders’ supporters (even after his half-endorsement of Hillary Clinton) continue to call for a reversal of “neoliberalism-as-usual” and forge a new, more socioeconomically equitable and just path forward.

The circle of political, corporate and social elites grows visibly tighter and more exclusive. Governments have capitulated to austerity policies that have resulted in further environmental degradation, and the underfunding, privatizing, or elimination of social programs and public institutions once synonymous with democracy and community-building. Inequality has flourished, benefiting an entitled few while savagely discarding the many. Xenophobia has surged as people find it easier to look for scapegoats rather than question the viability of systems that continue to oppress the vast majority of us. And entire swaths of the population are, understandably, feeling angry, betrayed, disenfranchised, ignored … and alone.

Meanwhile, precarious work and the systematic attacks on organized labour (and labour’s accomplishments) have contributed to the undermining of community on a very basic level: stress and depression levels rise; people spend less time — because they have less time, or because they work unpredictable hours, or because they’re rushing off to their next shift — getting to know their neighbours; relationships suffer; and families are placed under further pressure.

These are powerful feelings that can facilitate on the one hand a desire for something better for all of us — a movement-based demand for justice, equality, sustainability, and community. But on the other hand they can also be harnessed by forces that rely on fear and anger to drive a racist, sexist, classist, regressive agenda forward– with devastating results for already vulnerable, marginalized and colonized populations.

The good news: the two scripted options of neoliberalism and social regression are not the only choices we can make.

The challenge: what are progressives doing to help a generation of leaders articulate equitable, justice-based alternatives? How do we ensure they have the skills and support to promote those ideas to a public that has been ill-served by the political/economic system, and who will be even more undermined by the regressive “solution” being touted as the only alternative?

Arguably, initiatives like Next Up have never been more vital, especially for progressives: to convene diverse groups of people committed to finding their commonalities; to help establish new networks of support; to identify key resources; to hone their skills as leaders and social justice advocates.

In the absence of hard work, careful strategizing and honest — often painful — reflection, fear, despair, and anger can become overwhelming. Next Up was borne out of the acknowledgement that social progress takes work, that leaders don’t happen by accident, and that mentorship runs in more than one direction.

The contributions in the summer 2016 issue of Our Schools/Our Selves are a sampling of what Next Up is about, how it has evolved, and how we as a movement and as a society have already benefited enormously from what its graduates have accomplished in communities and across sectors. Next Up is a direct repudiation of so-called millennial “apathy” or “slacktivism”. Its success illustrates the magic that happens when we believe in our young people, when we’re willing to learn from them, ask tough questions about who we are and what we value, and support them in going further and doing better.

And it’s clear evidence of why, in the current context that posits neoliberalism or regression as the only two available paths forward, helping equip future leaders with the tools and knowledge to develop and promote better alternative options is so fundamental to our collective future, and the sustainability and viability of the planet on which we live.

Erika Shaker is the Executive Editor of Our Schools/Our Selves and Director of Education and Outreach at the CCPA. Follow Erika on Twitter @ErikaShaker.

The summer 2016 issue of Our Schools / Our Selves looks at youth engagement and progressive leadership, and the role played by the Next Up leadership program. Next Up programs are located in BC, AB, SK and ON. For more information, visit nextup.ca. And to find out more about what Next Up associates and alumni are doing in their communities, read the summer issue of OS/OS.