Ontario's economic update: pieced together with string and masking tape

Both revenues and economic growth are slightly lower than expected. But, the government is sticking to its deficit reduction plan; and holding it together with string and masking tape.

It is hoping that an increased focus on collecting taxes that are owed and shifting around reserve funds will do the trick this year.  Meeting its  timeline to reduce the deficit to zero will rely on program spending growth at less than 1 per cent per year until 2017-18.

Unfortunately, this strategy falls short of what’s truly needed. Ontarians need the government to step up to the plate and increase taxes to pay for the services that benefit everyone. And, the government has the mandate to do it.

In spring of this year, Premier Kathleen Wynne secured a majority government mandate on a budget that featured a few progressive measures such as better retirement security, poverty reduction, and a boost in wages for low-wage public sector workers.

That budget also committed to increasing badly needed infrastructure investment and some modest, but welcome, increases in taxes.

Ontarians gave this government a strong mandate to maintain and expand both public services and the role of government in our lives.

This is no small challenge. The needs in the province are substantial.

Our economic difficulties did not start with the recession. Changes in the international economic environment have hit Ontario hard. With the loss of almost 300,000 manufacturing jobs between 2000 and 2013, the province has lost an economic anchor. The increasing polarization in the labour market – with fewer middle class jobs and more precarious, low-wage jobs – has increased both income inequality and the need for more government services.

The province is also facing head winds from the federal policy environment: the federal government’s tax and transfer policies put Ontario at a disadvantage. Federal tax changes have resulted in reduced revenue to Ontario. And federal cutbacks that resulted in 36,900 fewer federal public sector workers than there were in 2011 has had a disproportionate impact on Ontario.

But the blame for policy choices doesn’t lie only with the federal government. The Ontario government’s reductions in corporate tax rates and timidity in overall tax increases to pay for badly needed public services have also made it harder for the province to spur job creation and meet the more progressive aspect of its stated policy goals.

The provincial government has been holding the line on total program spending for the last three years. To maintain the same level of public services, spending needs to increase with inflation and population growth. It hasn’t.

The chart below shows the difference between actual and projected program spending, and the levels that would be needed to keep up with inflation and population growth. 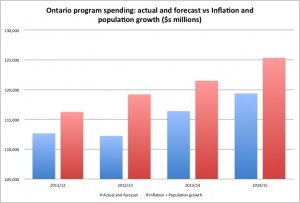 By 2014-15, program spending will be 5 per cent less than it would have been had it kept up with inflation and population growth. In total, that is a loss of $6 billion. The government's spending plans mean that we will continue to lose ground.

Job creation: Ontario’s employment to population ratio remains below its pre-recession level. The youth labour market continues to stumble. And, precarious work continues to grow more rapidly than stable, full-time jobs. Recent research shows that only 60 per cent of workers in southern Ontario have stable, full-time work with benefits.

Public sector employment also reduces inequality. Recent CCPA research highlights this: the pay gap between men and women is smaller in the public sector, as is the gap between racialized and non-racialized workers. It is the lowest paid workers who benefit most from public sector advantage.

This is confirmed by earlier research that shows workers in lower-paid occupations — such as cleaning, food preparation, and clerks — are generally better paid in the public sector than in the private sector. A cook working in the public sector was paid an average of $26,216 a year in 2006, which is 24 per cent more than the $21,089 average received by private sector cooks.

We cannot lose sight of the role that public sector services and public sector jobs play in reducing inequality – as well as provided needed public services that benefit everyone.

Infrastructure: The budget included a 10-year plan for infrastructure investment with a substantial share dedicated to investing in public transit and transportation. This commitment needs to be maintained, at minimum, and, at best, it would be enhanced.

A recent International Monetary Fund study outlined the reasons why now is a good time to invest in infrastructure. Low interest rates, slow growth and yawning infrastructure amount to a strong argument for continued capital investments by governments. These investments will be less expensive, contribute to economic growth and increase productivity in the future. The impact of these investments on growth can reduce debt and deficits by increasing productivity and economic activity, and by supporting GDP growth to outpace increase in debt – improving the debt to GDP ratio.

Even the CD Howe Institute and former Bank of Canada Governor David Dodge have weighed in on the need to have a balanced approach to deficit reduction. David Dodge has argued against a focus on deficit reduction and emphasizes the importance of infrastructure investment. While arguing for an offsetting reduction in operating spending in Ontario, a report CD Howe Institute has also noted the importance of infrastructure investment at this time.

It's one thing to table a budget, in anticipation of a spring election, that is pieced together with string and masking tape. But now that the Wynne government has secured a majority mandate, it has far greater scope to realistically address Ontario's need for public services and the revenues to pay for them. Today's economic update falls short on that challenge. By spring of 2015, the province may find itself unable to continue its tightrope act. At some point, either the string or the masking tape will break loose.