In an unusual move, the Ontario government released its 2016-17 budget in February, a month before the federal budget.

Given that the budget contains no real surprises and, for the most part, indicates this government is sticking to the plan it set out last year, it’s difficult to see why Ontario wouldn’t have waited for its federal partner’s budget.

With the Ontario 2016 budget, the Ontario government sticks to its knitting — staying on course to balance the budget in 2017-18 and making baby steps toward easing the harsh constraints on program spending.

We’re not getting too excited about easing of spending constraints: increases to health care and education will continue to fall behind inflation and population growth. That will likely mean more nursing cuts and continued turmoil in Ontario’s education system.

Two years ago, the Wynne government secured a majority mandate with the promise of becoming an “activist government.”

This budget takes a few baby steps in that direction, but in year two of its four-year mandate, the government is still crawling when it should be walking.

The government will continue its commitment to its historic 12-year infrastructure renewal project. It will provide stimulus just at a time when Ontario is starting to see green shoots of hope after years of economic uncertainty, and increased productive capacity in the future.

The headline grabber in this budget is the province’s cap and trade policy, which does three things:

Given Finance Minister Charles Sousa’s fixation on deficit reduction, the new cap and trade policy will be welcome news on the revenue front. But is it enough?

The minister’s deficit reduction fixation will get a boost from new tobacco taxes and alcohol charges, and other small changes.

The budget gets rid of a couple of ineffective boutique tax credits — such as the Children’s Activity Tax Credit, which the government says went largely to higher-income families.

Wynne’s government could and should do more. It could have taken advantage of brightening economic prospects to increase revenues to pay for the services everyone relies upon, but especially low-income Ontarians.

Falling behind on funding services

Despite some welcome tax measures, let’s be clear: the lion’s share of this government’s deficit reduction activities has come at the expense of expanding program spending to improve public services.

The finance minister has eased up on his goal of keeping program spending growth to below one per cent, but just barely: the province’s program spending is projected to average 1.9 per cent growth between 2014-15 and 2018-19. This means that government spending on public services will continue to fall behind inflation and population growth.

With a starting point of the lowest per capita spending budget in all of Canada, this will continue to have an impact on the quantity and quality of public services.

The chart below makes the point. According to the plan set out in this budget, by 2018-19, government spending will be 8 per cent below what it would have been if real, per capita spending simply stayed at 2011 levels. 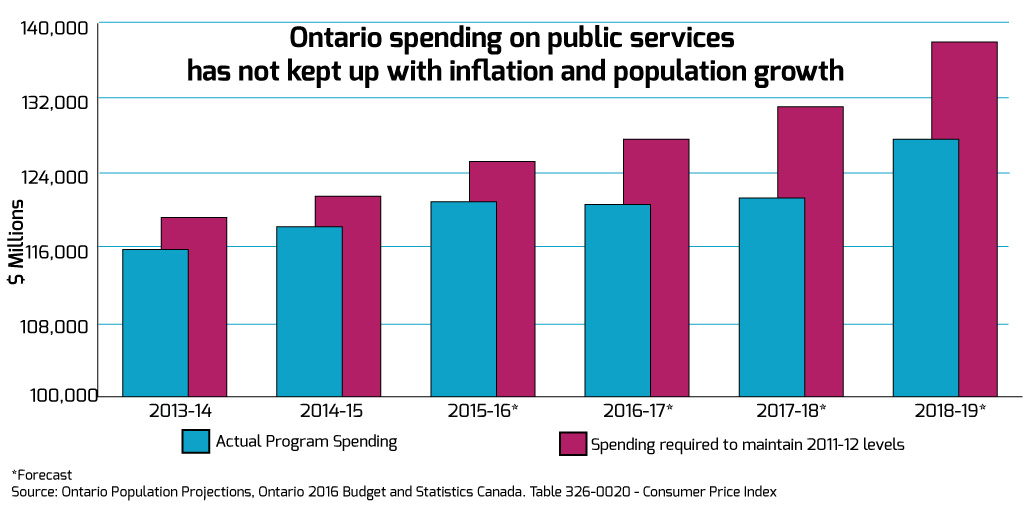 That’s a $10 billion gouge in public services that makes itself known through the reduction in the numbers of registered nurses in Ontario hospitals, ongoing missed targets in the Ontario poverty reduction strategy, and growing class sizes in Ontario schools.

In other words, government austerity on the program spending side of the provincial budget comes at great personal cost to many Ontarians.

Program spending going up, but not by much:

Following a four-year freeze, hospital funding will increase by only 1 per cent. This continued squeeze means it is unlikely any of the 1,200 layoffs of registered nurses last year will be reversed.

The 1.2 per cent increase in education spending in this budget also fails to address the elephant in the room for Ontario’s public education system: the education funding formula implemented during the Mike Harris years was flawed from the get-go and this budget does nothing to address the fundamental problem that continues to wreak havoc on the school system.

The government has been successful at making a political target of school teachers and school boards, but it’s the funding formula that is at the heart of the problem and the longer the government ignores that issue, the more prolonged the turmoil.

Overall, the province’s austerity agenda continues to be waged on the backs of public sector workers. Budget Chart 2.7 shows provincial public settlements fall well below all other private and public sector settlements since 2010.

Too little too late

It wasn’t supposed to be this way. Premier Kathleen Wynne was elected on the promise to value and protect public services. She was going to be the activist premier.

Midway through her majority mandate, Premier Kathleen Wynne has failed to deliver on her promise of the improved public services that an activist government should deliver.

Perhaps most disappointing has been the government’s slow response to falling behind on its own poverty reduction targets.

This budget allocates a 1.5 per cent increase to social assistance benefit rates, including a further increase for single OW recipients. Increases are welcome but with rising food prices, they will do very little to improve the ability of people receiving benefits to afford to feed themselves and their families the nutritious food that all of us need or to pay their housing costs, let alone other regular costs of living.

Ontarians who have been living in poverty have been waiting 12 years — since the McGuinty government took over from the Harris years— for a return to more adequate social assistance incomes. This year’s increases are too little, too late.

There remain a range of options available to the provincial government to increase taxes. They include: raising the corporate income tax rate and/or taking up the HST tax room left from the 2 per cent cut to the federal GST. Each point in the HST would raise $2.6 billion. Returning Ontario’s corporate income tax rate to previous levels is another option, as rates are a lot lower than in neighbouring jurisdictions. There was tax room to move into here, but the government passed.

All eyes on the federal budget

Budget 2016-17 lays out where the provincial government stands, but there remain many questions about how and when the new federal Liberal government will step up to the plate in full partnership with Ontario.

That potentially multi-billion dollar question hangs heavily in the air while many Queen’s Park observers remain confounded by Ontario’s decision to drop its 2016-17 budget inordinately early — in February, a month before knowing what the federal government plans in its own budget.

Coming out with this budget before the federal one cut off the possibilities for more meaningful progress on renewing and restoring public services in Ontario. How much more could this budget have delivered for Ontarians? We will find out in only a few weeks.