As public opinion polls confirm, the wheels seem to have come off the Ford Fiesta.

After months of fallout from cuts to education, hundreds of educators across Ontario receiving redundancy notices, and a round of collective bargaining-related gauntlet-throwing, provincial MPPs retreated to their ridings for an extended summer break that just happened to overlap with the federal election cycle. If this was a tactical retreat, it was badly handled.

A massive cabinet shuffle only temporarily changed the channel; soon Ontarians were talking about accusations of nepotism (starting with Taylor Shields and Tyler Albrecht) centred around former chief of staff Dean French and connections to St. Michael’s College, Western University and lacrosse. A handful of high- and medium-profile resignations ensued and are continuing to unfold.

Given the mishandling of the education file, the decision to appoint a new face (with an enhanced background in communications, lacrosse, St. Mike’s and Western) to the contentious portfolio wasn’t surprising. Minister Stephen Lecce hit the ground running with a confusing appeal to education unions that bargaining not interfere with kids being in classrooms for September. Well, obviously: collective agreements do not expire until August 31, and there is a clearly set-out labour process that ensures the school start date will not change.

The July 2 announcement (at a pricey STEM-focused summer camp) of a revamped mandatory high school career studies course that would focus on financial literacy, social media use and “career pathways,” seemed more substantive. “This transformation will help inspire our students to think big, to aspire for better jobs, and to support the creation of a credible career pathway so they can succeed in a competitive global marketplace,” said the minister in a press release.

Governments have proven incapable of addressing growing and persistent inequality in Canada and other rich countries. Financial literacy has emerged prominently as the deeply individualized “cure” to the problem, when in reality it can only shroud the so-called mystery of governments retreating from their responsibility to publicly provide a decent cradle-to-grave quality of life (and the funding that ensures it) for the people and communities they represent.

The integration of financial literacy into the public school curriculum has been taking place across Canada, province by province, since at least the mid 2000s (right around the Great Recession). Ontario’s "updated" and newly released financial literacy curriculum was developed by educators under the previous government.

There’s nothing inherently wrong with teaching anyone, including kids, how to develop a budget, or how to calculate compound interest. Creative math teachers have been doing this—and more —on the regular for years. But financial literacy is rooted in a conveniently cruel misunderstanding disguised as an appeal to personal responsibility: that our financial well-being is the product of the good and bad choices we as individuals make; that if we can separate “wants” from “needs” and develop a forward-looking plan—and the earlier the better!—we will achieve our goals, pay off our accumulated debts and live normal, healthy lives.

Financial literacy does not teach people that they are more likely to stay poor if they are born poor or that they won’t be able to meet any of their goals on most provincial minimum wages. It is not about addressing the ways in which the broader system—precarity, insufficient labour protections, inadequate public funding, the gender wage gap, a colour-coded labour market—reinforce existing inequity and further entrench poverty.

Financial literacy is certainly not about addressing how employers have dropped the ball when it comes to providing on-the-job training, preferring to insist that public education has to reconfigure itself to respond to the needs of the marketplace by preparing future workers to assume their place within it. Rather, it’s about providing students with the illusion of empowerment—you can budget your way out of precarity and unaffordable child care fees by making “smart decisions”—and individualizing the blame (as underscored in any number of articles about millennial “entitlement,” eight dollar lattes and avocado toast).

In a later announcement the minister of education asserted that mandating courses like financial literacy is how “we provide equity in education...how we make sure that every kid in the classroom learns transferable skills, life skills, like how to budget for the year after high school.” However, asking students to develop a budget for their first year after graduation and compare different forms of borrowing to pay for any post-secondary education they plan to seek, particularly given the recent overhaul of OSAP that has left students scrambling after realizing their financial assistance (especially grants) had been slashed, is epic level trolling.

But troublesome too is the rhetoric about preparing high school students to consider the “jobs of tomorrow” with specific references to STEM (science, technology, engineering and math) when those are some of the very courses being shuttered due to insufficient numbers, now that average class sizes have been increased. It’s hard to pursue a post-secondary education when the prerequisites for enrolment in certain programs are no longer offered or, at the very least, are increasingly difficult to find. Presumably, the “resiliency” students will absorb through overcrowding-induced osmosis—a scientific principle they might not learn about in Biology if it's been cancelled due to increased class size caps—will have to be their consolation prize.

Obviously scheduling protections to help people in precarious employment plan their lives and their finances, or equal pay for part-time, contract, temporary, and temporary help agency workers compared to that of full time workers has a great deal to do with the quality of their future workplaces and the lives graduates can help build for themselves. Far more than, say, a high school careers course that encourages students to separate “must haves” from “nice to haves” in a job or occupation without careful examination of the labour and political context in which employers act and those jobs exist. 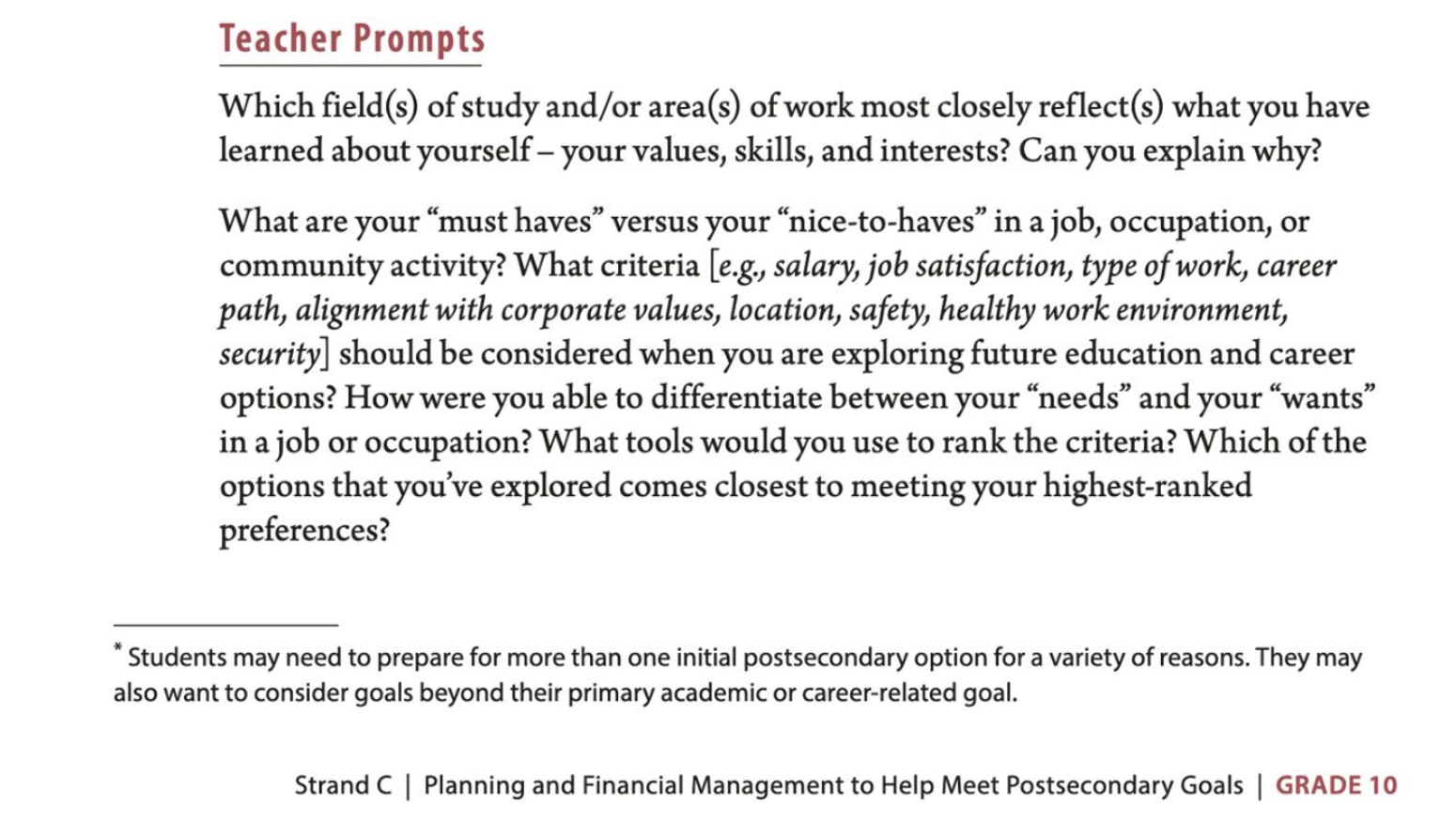 And no financial literacy class about “planning for the future” will compensate for the uncertainty that arises in the present for workers who must prove they are an employee and not an independent contractor when an employer maintains otherwise.

So in spite of the “better math proficiency = better jobs” assurance from the minister of education ("retweet if you agree!"), slashing OSAP, rolling back labour protections and creating chaos in high school course selection are likely to be substantial obstacles to the “jobs of tomorrow” graduates are expected to pursue; obstacles that no amount of numeracy, “resilience” and moxie will compensate for.

Chris Arthur and Laura Pinto in the summer 2014 issue of Our Schools Our Selves.

No Safe Harbour: Precarious Work and Economic Insecurity Among Skilled Professionals in Canada

Born to Win: Wealth concentration in Canada since 1999