In his fall economic update, Ontario’s Minister of Finance Charles Sousa promised relief to homebuyers, but is it enough to cool rising housing costs in hot markets like Toronto?

It is understandable that the Ontario government decided it needed to take action on this issue: home prices in the Greater Toronto Area have jumped by 20 per cent year over year since October 2015, while home sales have increased by 11 per cent compared to last year.

The multi-year boom in real estate has been a huge blow to housing affordability.

An RBC report showed that in the first quarter of 2016, 71.7 per cent of a typical household income in Ontario would be required to cover housing costs, given the average home prices.

To develop effective policies to increase affordability, governments need to understand what is the driving force behind this ongoing real estate boom.

Recent research on people who buy homes or condos as investment properties, as opposed to their primary residence, has shed some light on this issue. A survey by Ben Myers showed that domestic investors account for 25 per cent of the demand for Toronto housing. In the condo market, domestic investors outrank foreign investors 10 to 1.

Although a potential policy response should encompass leveling the playing field between investors and homebuyers, it should not leave out long-term renters.

This research supports the Ontario government’s decision not to follow British Columbia’s lead and implement a tax on foreign purchasers. It would not have addressed the heart of the problem. And that tax is being challenged in a court case on human rights grounds, along with others.

First-time homebuyers currently qualify to receive a refund up to $2,000 — an exemption that is costing the province $155 million in lost revenues. Doubling the rebate means fewer dollars in the public purse.

The doubling of the rebate to $4,000 would translate into savings of 0.4 per cent of the average home price in Toronto. Does this really make buying a home in today’s market more affordable?

The new changes in the land transfer tax will have little impact on affordability, while reducing revenues available to government. They do nothing to drive down home prices on the market.

Similarly, while the government is patting itself on the back for increasing affordability for renters, it is still possible that renters are left out of the equation: Part of the affordability measures announced today include a freeze in property tax on apartment buildings. But will these cost savings translate into lower rents for renters or will the benefit remain with landlords?

As we have noted in our report, Nobody's Business: Airbnb in Toronto, the increasing presence of short-term rentals in Toronto is having a negative impact on the rental housing stock.

When compared to homeowners, it is evident that renters are far worse off when it comes to adequate incomes and needs for shelter.

CMHC data shows homeowners in Ontario have approximately double the household income (before taxes) of renters. At the same time, almost 30 per cent of renters are in need of core housing, compared to 7 per cent of homeowners. 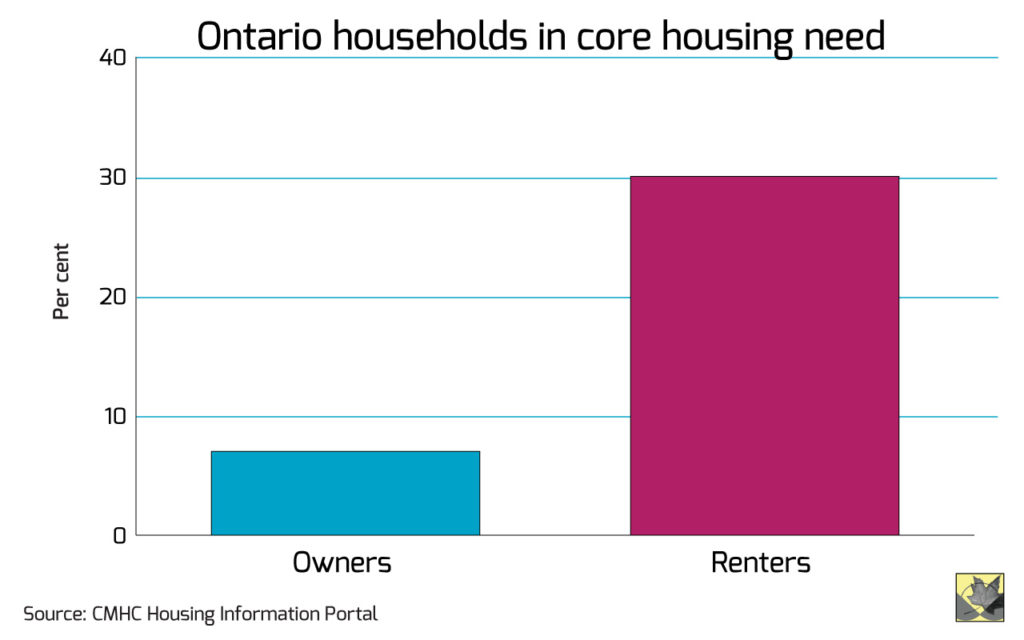 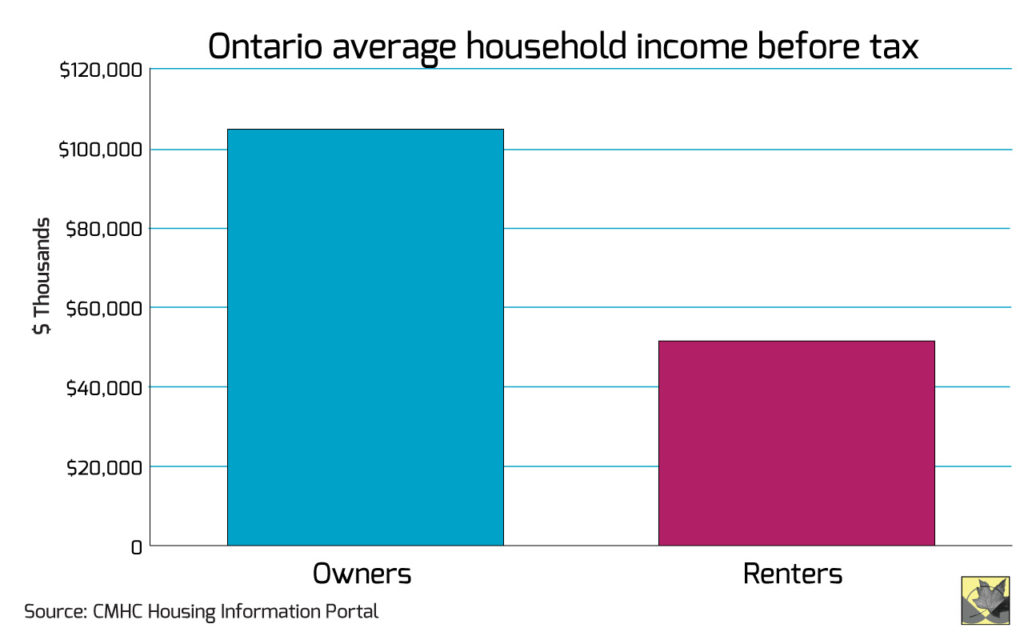 The Ontario government had consulted on this issue, but action needs to follow.

Given the recent increase in rents for Toronto (7.2 per cent year over year for a one bedroom), provincial rent control regulation should be revisited.

Presently, rental units built after November 1, 1991 are not subject to rent control laws that prohibit landlords from increasing rents beyond a guideline set by the province.

The lack of rent controls in more recently constructed buildings and condominiums means that landlords have no ceiling in setting rents. Renters face a lose-lose situation as high housing prices act as a barrier to entry and keep many stuck in the rental market which, in turn, eats into the rental stock and also places upwards pressure on rental prices.

These policies are symbolic, and will not be effective in increasing affordability for either rental or ownership. More needs to be done, and a great place to begin would be to increase affordability and access for renters.