On October 1, the 800,000+ workers who earn the minimum wage in Ontario will get a raise, but don’t celebrate too quickly: it’s going up by a mere 15 cents an hour.

The hike represents the second year of the Ontario government’s commitment to annually adjust the minimum wage to inflation, which is a good idea.

But, given the fact that a full-time, full-year minimum wage worker still lives below the poverty line, it’s important to ask: what does a 15 cent raise buy in 2016?

Our researcher Jordyn Perreault-Laird steadfastly set out on a shopping spree to find out. 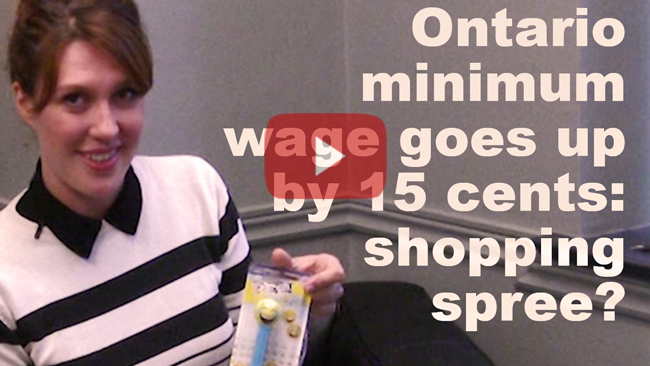 For 15 cents, Jordyn found three sugar sticks in neon orange, green, and yellow. Knock yourself out.

For $1.20 a day, Jordyn found a couple of timbits and a cappuccino pod (assuming you have a Keurig-style coffee brewing system — or you could use the cappuccino as a rub for a cheap cut of meat …).

For $6 a week, Jordyn found a fantastic Pez candy dispenser, with a week's worth of refills. Just in time for Halloween (trick? or treat?).

At 15-cent annual increases, it will take until 2040 for Ontario to reach a $15 minimum wage, so clearly, relying on annual inflation adjustments isn’t the ultimate solution.

It is the first province to commit to a $15 minimum wage, but you can bet the pressure will grow on competing provinces to quickly follow suit.

The good news is that a $15 minimum wage would put Ontario minimum wage workers within about 60 per cent of the average industrial wage — that would be a good rationale for any government intent on addressing income inequality and embedding a sense of fairness in the labour market.

A $15 minimum wage still falls short of what it takes to earn a living wage in most Ontario communities (in Toronto, for example, the living wage number was $18.52 in 2015) but it would be a step in the right direction.

So, on October 1st, I will think about those sugar straws, the timbits, and the Pez dispenser that the 15-cent increase will buy a minimum wage earner as a reminder that Ontario still has a long way to go to end working poverty in this province. We know we can do better.