Ontario kicked off 2015 with lacklustre job and wage trends

Ontario started the New Year with very little change in its jobs numbers: the employment rate is holding steady but there is a shift in part-time job growth.

Despite the bad news on the job front in January – massive Target Canada layoffs and the closing of Wrigley’s chewing gum factory in Toronto – Ontario created a 1,300 jobs last month.  The layoffs will be hitting the labour market numbers in the months to come.

That’s a shift from Ontario’s 2014 job trends – a year where more than 90%of the province’s new jobs were full-time.

The employment rate, on the other hand, remains unchanged. 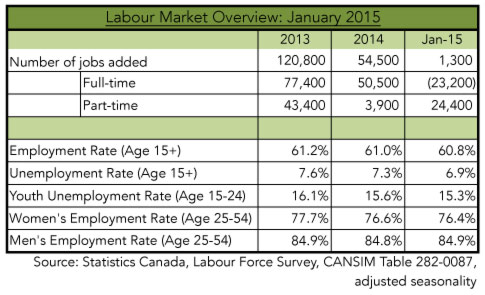 The other measure I’ve been keeping an eye on lately is wages: are they going up, down, or is the needle stuck? Median wages remained virtually unchanged in January, reflecting a sustained pattern of stagnant real median wages in Ontario, as well as in Canada.

Given governments’ reliance on consumer spending to help drive economic growth, wage stagnation is a red flag trend: workers are not seeing an increase in their purchasing power.

Add to the trend this development: the largest increase in employment came in the category of self-employment, where a total of 20,000 jobs were added in January. And, from a recent Hennessy’s Index, we know that self-employed individuals earn about 20% less than a “regular employee”.

A year-over-year comparison of temporary work suggests that Ontario is following a similar path as British Columbia: it’s creating more temporary than permanent jobs. Compared to January 2014, Ontario has just over 80,000 more temporary employees and just under 80,000 fewer permanent employees.

Ontario’s jobs report is, once again, lacklustre and wage stagnation trends don’t make the job news any easier to digest.