Today’s Statistics Canada Labour Force Survey indicates Ontario was among a number of provinces to experience job losses in January. Some observers may be pinning Ontario’s losses on the minimum wage increase, but we can’t draw conclusions from one month’s worth of data. In some sectors things are looking up, in other sectors there were losses. One month doesn’t make for a long-term trend.

Ontario saw some job losses in January, but those losses were not concentrated in minimum-wage dominated sectors, as some might have expected.

Job losses in Ontario were concentrated in the service sector, but much of that loss was outside the industries with large numbers of low-wage workers. The 44,000 drop in service sector employment included professional, scientific and technical services (-13,300), public administration(-5,600), educational services (-8,100), and health care and social assistance (-9,700).

Ontario’s seasonally adjusted employment decreased by 50,900 jobs in January, a 0.7 per cent decline. The unemployment rate was virtually unchanged at 5.5 per cent compared to 5.6 per cent in December. This is similar to the experience in Quebec, where employment fell due to a loss in part-time jobs. Youth employment fell in January in Ontario, as it did in other provinces.

We know that minimum wage jobs tend to be concentrated in three sectors in particular: ‘food and accommodation’, ‘wholesale and retail trade’, and ‘business, building, and other support services’ (which include call centres, cleaners, security guards, landscapers, and waste collectors).

The chart below shows employment in these three sectors in Ontario for the last 12 months. In two of these three sectors employment held steady in January, rising slightly in accommodation and food services and in business services. Those gains worked to offset some of the drop of 15,500 jobs in wholesale and retail trade, which amounts to a 1.4 per cent drop. 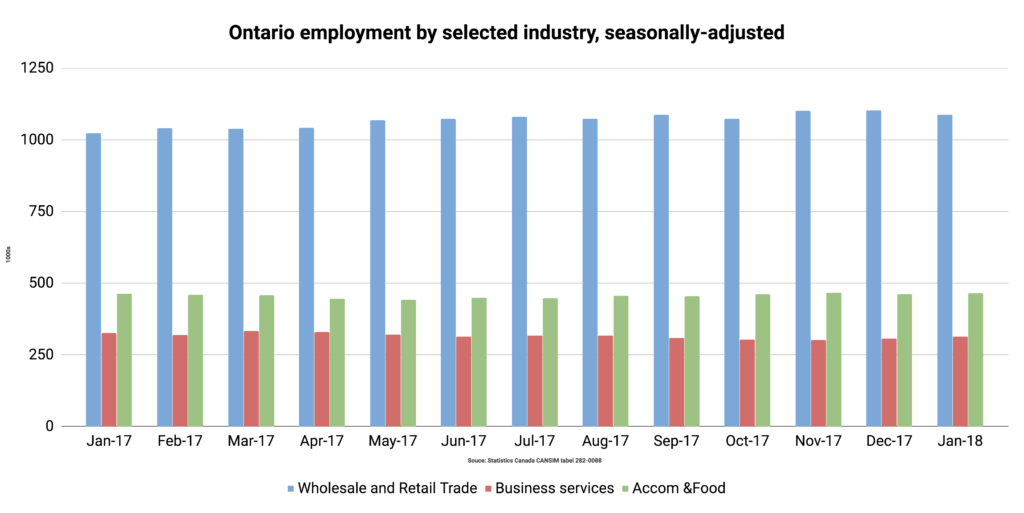 Again, this is the first month of data from a time series that can be volatile. There are a number of factors that can influence any one month. We look forward to more data to understand how the increase in the minimum wage works its way through the labour market.