Act I was the line-by-line review that contends public expenditures have grown by an exorbitant 55 per cent over the past 15 years. We analyzed the out-of-context figures and coded language and described it as a frame job meant to present the governing party as a fiscal saviour and set the stage for public service cuts, selling off more public assets, and privatization. Regretfully we were right on all counts.

Today’s release is a three-part act: manufacturing a fiscal crisis; introducing cuts dressed in sheep’s clothing; cutting taxes and setting the stage for deregulation and privatization. This is not simply an unoriginal act, but one that hurts Ontarians deeply.

“The Commission has revealed the starting point for 2018–19 is a $15 billion deficit. This deficit trajectory would worsen without meaningful government action.”From “A Plan for the People” p.16.

“Servicing the debt is Ontario’s fourth largest line item after health care, education and social services. This year, Ontario’s interest on debt is costing taxpayers over $1.4 million every hour.” From “A Plan for the People” p. 22. First, it is worth noting that the $15 billion deficit that the government keeps mentioning is a contested figure. We have reviewed that estimate and concluded the math doesn’t add up. 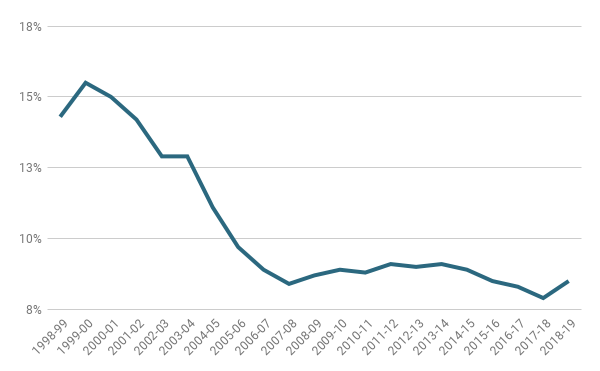 The economic update also overstates the risk of increasing interest rates. The weighted average borrowing term of Ontario debt is 12 years.  Over this extended period of low interest rates, the Ministry of Finance had locked in debt at longer terms. This mitigates the impact of an interest rate increase on debt servicing costs.

The economic update contends that Ontario is spending too much on public services and needs to cut back to balance the books. If this sounds counterintuitive to anyone living in the province, it is because investments in public services have been declining.

Ontario has some the highest child care fees in the country; the lowest per capita spending on elementary and secondary students of all 18 Northeastern states and Great Lakes states and provinces (a commonly used benchmark in education) ; and, on average, the most expensive undergraduate tuition fees in Canada.

Ontario’s social assistance recipients live in deep poverty. The latest Welfare in Canada report shows that a single person on Ontario Works receives the equivalent of 45 per cent of the value of the geographically adjusted Market Basket Measure – Canada’s official poverty line. Adults with children receive the equivalent of 72 per cent of it. By this measure, Ontario’s social assistance rate for adults with children is the seventh most inadequate of the country's 10 provinces.

The government’s response thus far? Cuts. One of the first actions of the new government was to cut by half an approved 3 per cent increase in social assistance rates. It also axed a basic income pilot project that increased rates for enrolled participants while testing new approaches to income support.

The economic update offers no new information on what the government plans to do about social assistance – an announcement is expected on November 22nd.  So, more wait and see on this file.

Ontario’s underinvestment in the health care sector is well known, making it a key topic in the last provincial election. We have estimated a health care funding gap of $10.4 billion for 2018-19. To keep up with population growth, an aging population, and inflation, Ontario needs to address this gap and begin to increase the health budget by 5.3 per cent annually.

The government’s response thus far? $90 million in one-time funding to help hospitals to get through the flu season. The economic update states that “the government has started delivering on its promise to end hallway healthcare.” (p.67). This temporary investment is an acknowledgement of the problem, but not an actual step towards a long-term solution. So, more wait and see.

Another item on the wait and see file: the government is reviewing Metrolinx and offered no news on its plan to upload the subway from the City of Toronto.

But there is no wait and see on the tax cut front. Despite the alleged deficit and debt crisis, the economic update cancelled a number of measures that would have increased revenues and the government is rushing ahead with a number of tax cuts.

The government is giving away a $160 million tax break to small business (by 2021) by cancelling the phasing out of a small business reduced corporate income taxes.

The government is providing employers with another $40 million in tax breaks by cancelling a measure that changed the eligibility criteria for the employer health tax exemption.

The government is also cancelling a proposed adjustment to tax brackets, which the previous budget estimated would have brought in an additional $275 million from high-income earners.

The economic update pays a great deal of attention to carbon taxes and pipeline construction. Two full pages—to be precise. Too much attention?

In our analysis of the Government of Ontario’s decision to cancel the cap-and-trade system, we showed the decision creates a $3 billion hole in the province’s finances and guts programs that improve infrastructure and support low-income families – all of it while not reducing household taxes, since the cancellation triggered a federal carbon tax. Most importantly, Ontario is failing to live up to its responsibility to respond to the single greatest threat to Ontarians’ well-being.

All the same, the Government of Ontario is doubling down on it. With all the issues that Ontario is facing, we don’t understand the premier’s climate denial and focus on a costly uphill battle with Ottawa.

Meanwhile, the economic update indicates that this government plans to move forward on a major deregulation agenda, promising to ‘cut red tape’ by 25 per cent by 2022. It’s also getting rid of a few important watchdogs, namely the environmental commissioner and the child advocate.

So this is the Act II of Ontario’s new three-act play. While more reviews leave us waiting and seeing what shoe will drop next, we can predict how this play ends: with more Ontarians struggling to get by with less and with fewer people trusting in government to put public needs ahead of private interests.