Ontario Budget 2015: Kicks the can on fixing Ontario's real problems

by Sheila Block and Kaylie Tiessen

Budget 2015 may be big on rhetoric, but it doesn’t deliver on the promises for strengthening public services that Premier Wynne was elected on.

It is, instead, a procrastination budget; one that skilfully avoids a conversation about Ontario’s chronic revenue problem and shifts the cost of underinvestment in public services on to private households.

The province trumpets that it will reduce the deficit to $8.5 billion this fiscal year to $4.8 billon next year and reach a zero deficit by 2017-18.

But to get there, program expenditures are increasing by only 1.4 per cent this year. This is below what is required to keep up with inflation and population growth. Over the last 5 years, it works out to a decrease in real, per-capita expenditures of 6 per cent, or more than $7 billion in total. 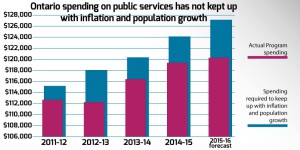 This drop in real, per-capita spending has real-life consequences. Here are just a few:

An estimated 1,743 registered nurse positions have been eliminated since the start of 2012. Research shows that a reduction in nursing care in hospitals will increase risk of medication errors, cardiac arrest, pneumonia, and other adverse outcomes. Budget 2015 increases spending at the Ministry of Health at only 1.2 per cent, lower even than the inadequate growth in total program spending.

Despite the Wynne government’s statement that it’s not interested in more austerity, public sector workers and public services are still being squeezed: 400,000 people have been subject to a wage freeze of one to four years since 2012. This year’s budget promises more wage freezes or cuts to public servants; once again reducing the deficit on the backs of public servants.

This budget did continue the annual one per cent increases in ODSP and OW rates. And, provided another top-up to single people without children who are receiving OW. However, these rates remain woefully inadequate.

The province is requiring students to shoulder a greater share of the cost to get a post-secondary education even though everyone agrees a degree is an important ticket into the labour market: last year marked first the time tuition made up more than 50% of the operating budget of Ontario’s universities.

All of these consequences, and more, result from the government not facing up to a revenue problem it inherited after a 20-year legacy of tax cuts. Without a robust increase in revenue, this government is left with the slow erosion of public services and a hardened stance in collective bargaining.

The government’s solution? Instead of dealing with its revenue problem, it has kicked the can down the road with the announced sell-off of a prized public asset Hydro One.

The government is trying to justify taking Hydro One out of public hands in order to pay for public infrastructure, but here’s the reality behind that rhetoric: the sale of Hydro One is expected to raise $4 billion to put towards Ontario’s infrastructure investment plan – a mere 3 per cent of the $130 billion infrastructure spending plan for the next 10 years. The sale doesn’t actually solve anything.

A two percentage point increase in the HST would yield more each and every year than the one-time influx of cash from the sale of Hydro One. And it would leave current public assets intact, to continue to bring in revenue for the province – with a focus on public shareholder interests instead of private shareholder interests.

Returning the corporate income tax rate to the 2009 level would perform a similar feat in terms of restoring revenue health to the province’s fiscal coffers.

On the jobs front, the government could be a lot more proactive: Ontario needs to create 79,000 more jobs in order to recover the pre-recession employment rate of prime-age workers.  Add youth into the mix and that number climbs to 142,000 missing jobs. The government has forecast an increase of only 78,000 new jobs in 2015.

Only 52.5% of all young Ontarians are working. That’s 3.5 percentage points lower than in October 2008 when the employment rate of young workers was 56%. 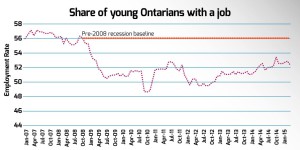 In Budget 2013, Ontario announced the Youth Jobs Strategy (YJS). The YJS was a two-year, $295 million investment into creating jobs for young people by creating employment opportunities, entrepreneurship and innovation. The budget renews the Youth Jobs Strategy, but with reduced funding. The youth employment numbers above suggest that the program has not been enough of a bridge between young workers and good jobs.

More needs to be done to invest in the province’s future workforce.

There is a glimmer of hope: the Ontario government is reviewing the Employment Standards Act and Labour Relations Act with an eye to better protecting people in precarious work - an important step in improving the quality of jobs in Ontario. There are, however, things that could have been done in this year’s budget to improve the quality of jobs in Ontario. These include:

While we are supportive of the progressive policies of the Wynne Government (including commitments to poverty reduction, equal pay, putting a price on carbon, implementing a made-in-Ontario Pension Plan and the major investments in transportation and infrastructure), there is much more that should be done to put this province on a more prosperous and inclusive path forward.

Budget 2015 is the first Wynne government budget tabled without minority government pressure. It was an opportunity to truly turn government rhetoric into reality.

But without dealing with the province’s chronic revenue problem, the government has continued to kick the can down the road. Today’s budget day looks a lot like the movie Groundhog Day, with re-announcements and the same unresolved problems Ontario has been facing for years: insufficient revenue to pay for the quality public services Ontarians deserve.