One of the oldest tricks in the books: Canada’s rich dodge the stock option tax bullet 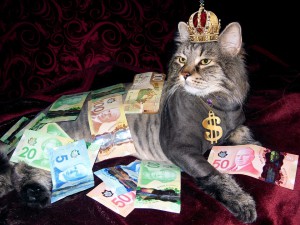 Taking on the generous tax benefits available to the rich is a tough business.

The rich are, well, rich. They have a lot of money to spend on fighting back.

And because, as individuals, they have a lot at stake, it makes financial sense to spend a lot of their money fighting to hang on to their tax advantages.

They are also really good at it. One favourite tactic – probably prominently displayed on page one of the high-income preservation manual – is to create a characterization of the beneficiaries of the advantage.

This involves the creation of a poster child that is more sympathetic and therefore easier to defend than the typical beneficiary. Then they denounce any proposed changes that would affect the sympathetic poster child.

The strategy gets rolled out on a regular basis.

For example, when any change in the taxation of investment income is denounced as an attack on the living standards of legions of widows and orphans who depend on dividends and capital gains to keep them out of the poor house.

Never mind that the number of elderly widows who are one dividend tax change or capital gains tax change away from poverty is vanishingly small. When campaigning on behalf of the rich, you only need one.

When the facts might get in the way of a good story, the strategy is just to ignore the facts.

A great example is the assertion that millions of Canadians have something at stake in capital gains and dividend taxation because they have retirement savings in the form of pension plans and RRSP accounts.

Sounds good, because it suggests that millions actually benefit from these gifts to the top of the income scale. There’s one slight problem, however. Pension plans and RRSP accounts don’t benefit from either the dividend tax credit or the capital gains exemption. Anything earned inside a pension plan or RRSP account is fully taxed, with no dividend tax credit or gains exemption when it is paid out.

Over the past few months, since the Liberals were elected federally on a platform that included getting rid of the special tax treatment of stock options, the defenders of the rich have been on high alert.

What’s at stake is a special provision of the Income Tax Act that treats income received through the exercise of stock options as if it is a capital gain, subject to tax at only half the normal rate.

A stock option gives the holder the right to buy a corporate share at a pre-determined price at some point in the future, regardless of the actual market price at the time. The difference between that pre-determined price and the actual price when the share is sold – the gain from the option – is income just like any other income. But it is taxed at half the normal rate.

In the research I do each year on the compensation of the CEOs of companies listed on the Toronto Stock Exchange, stock options figure prominently.

For example, in 2014, grant options for CEOs and equivalents of the companies in the TSX index were valued at $199 million – using a very conservative methodology.

The top 100 CEOs got $120 million of that. The TSX index chief executives held options worth $2.48 billion at then-current market values; of which the top 100 accounted for $2 billion.

The $2.48 billion in unexercised options held by the index chief executives represents a stake of $400 million at current tax rates in the special tax treatment of stock options.

When you consider that options are used as a form of compensation for more corporate executives than CEOs, and that there are over 1,500 companies listed on the TSX, it is clear that executive compensation accounts for a pretty sizeable chunk of the $760 million value for the stock option deduction reported in the Department of Finance’s 2015 Tax Expenditures report.

Obviously, a campaign against taxation of stock options focused on the pay of CEOs in Canada wouldn’t gain a lot of traction.

So, instead, the tax avoidance industry created a poster child for the terrible consequences of taxing stock options – the high-tech start-up company. Companies that have little or no cash in the early stages of their development, and attract employees by offering paper – stock options – that will turn into money if the company succeeds.

Take away the ability to offer stock options, the story went, and high-tech start-ups won’t be able to attract employees and Canada will become a technology company wasteland.

Of course, introducing fairness into the tax treatment of stock options doesn’t prevent a start-up company from offering them. It just increases the tax payable in the future if the options pay off and are exercised.

And if the concern is really about being able to pay people enough, after tax, to attract them to the company, there’s also a pretty easy way to do that: just issue about 25 per cent more stock options and the after-tax position is identical.

Not a big deal for the start-up. But a very big deal for Canada’s highest paid executives. So nobody mentions those little details.

Nor do they mention an easy way to separate out the “deserving” cash-poor start-ups from the established corporations that, by using stock options as a form of payment, are enlisting Canadians generally in paying their executives.

Instead of the current blanket form of special tax treatment, one approach to options would be to exclude share options for corporations that were listed on public stock exchanges at the time of grant from the special tax benefit. That would enable start-ups to take advantage of the benefit, while withholding it from established corporations.

Or, if we really wanted to support high-tech start-ups in Canada, we could cancel the special tax benefit entirely and use some of the savings to provide targeted support to high-tech startups when they really need it – in the real start-up phase before they even begin to generate stock option gains.

Instead, the Liberals’ commitment to tax fairness in this year’s federal budget appears to have collapsed like a pile of Jenga blocks in the face of the oldest trick in the playbook of the rich, privileged and entitled.