Occupying the Lang and O'Leary Exchange

Starting today I will be on a regular weekly biz panel for the Lang and O’Leary show, every Thursday night.

The panel will take on two six minute segments to discuss the big economic stories of the day. Today’s proposed topics – the Eurozone mess, whither Canada’s GDP, is Occupy a media invention/will it hold without media attention, upcoming job market numbers

A cool opportunity to bring a progressive perspective into perhaps the most neoliberal — and watched — Punch and Judy show in the business news universe, at least in English-speaking Canada.

The show airs daily on CBC News Network, between 7 and 8 p.m. (EST, but I think everywhere same time slot) The biz panel segment will be in the second half of the show, after 7:30.

The media seems just as much in a rush to bury the Occupy movement as it was to report its birth. But as Mark Twain said, upon reading his obituary in the paper “The reports of my death are greatly exaggerated.”

Will Occupy’s “life” rise and fall on the number of people willing to live in tents in parks in the winter? 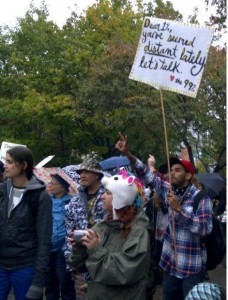 Nah, its influence is more lasting than that. It has moved a critical conversation from social media to mainstream media. It has changed both what gets talked about, and the range of views that reach broad audiences. That changes how we talk about things. Genuine conversation advances the narrative – you learn from each other, you move on to new questions, new discoveries.

Here’s to Occupying The Future, with Lang and O’Leary.