NDP Words: Money Where Your Mouth Is?

In this three-part post (Liberals, Conservatives) I wanted to take a look what the parties said in their platforms compared to what they actually want to spend money on...are they putting their money where their mouth is?  For each of the parties I've created two wordles or word charts.

In the "Mouth" word chart you'll see how they used words in the text of the platform.  Bigger words means that those words were used more.  The word "Canada" was dominant for all 3 parties so I removed it so smaller words would be clearer.

The words in the NDP platform are well distributed after the party name.  There aren't particularly dominant themes in the "Mouth" graph and nothing like the "government" concentration of the other platforms.

When it comes to the "money" graph though there is a strong concentration on the three money raising areas, a corporate tax rollback, cap & trade and closing tax havens.  Some of their other planks do come through as significant spending items like families with children, green R&D, aborigional education and HST for Quebec. 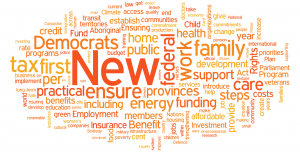 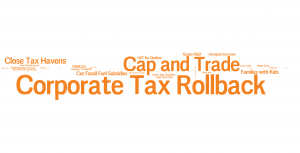