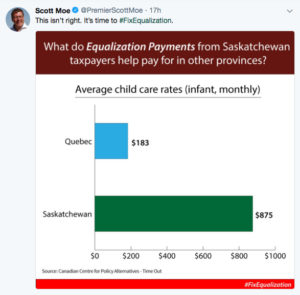 Premier Scott Moe tweeted this graphic on equalization yesterday. The tweet continues the Saskatchewan government's long record of misrepresenting how equalization works in the hopes of ginning up anti-Quebec and anti-Ottawa sentiment among the Saskatchewan electorate. However, this time the misrepresentation goes one further, as it implies the graph is somehow based on research from the Canadian Centre for Policy Alternatives.

Let's be clear about why this messaging is inaccurate.

First off, the study cited, Time Out: Child care fees in Canada 2017 by David Macdonald and Martha Friendly makes absolutely no reference to equalization payments. It is a compilation of median child care fees paid in cities across the country, illustrating how provincial policy can work to achieve more affordable childcare. In no way does it imply that Quebec's lower fees are a result of equalization. This is simply a blatant misuse and misrepresentation of CCPA's research to further the Saskatchewan government's willful distortion of equalization to convince the Saskatchewan public that we are somehow "paying" for Quebec's subsidized childcare system. Either Mr. Moe is completely unaware of how equalization actually works, or he is purposively misleading the Saskatchewan public.

In actual fact, no province “pays into” the equalization program. Equalization is administered through federal taxes that we all pay equally (we all pay the same GST and federal tax rates regardless of what province we live in, including Quebec). As Economist Trevor Tombe succinctly explains, "equalization asks a simple question: How much revenue would each province raise with tax rates equal to the national average? This is a province’s “fiscal capacity." If a province would raise less than the average amount, per person, the federal government tops it up." As François Boucher and Jocelyn Maclure explain, "Quebec and other recipient provinces are not on the receiving end of the equalization plan because of excessive spending and lower taxation rates but rather because they are less wealthy in the sense that their fiscal capacity is smaller: they have to apply higher taxation rates than the wealthiest provinces do in order to secure comparable revenue from their income sources." Indeed, as Tombe illustrates, Quebec's tax rates are nearly 30 percent higher than the national average, whereas Saskatchewan's are about 10 percent lower. Saskatchewan already has the fiscal capacity to afford a childcare program similar to Quebec without equalization. We just refuse to raise the money to pay for it. If the Premier was serious about instituting a universal childcare program in Saskatchewan he might consider moving our business tax rates closer to that of Quebec (see below). Quebec's affordable childcare program has nothing to do with equalization. Our lack of affordable childcare has nothing to do with Quebec. That responsibility lies squarely on the shoulders of the current provincial government, and no amount of misrepresentation will change that fact. 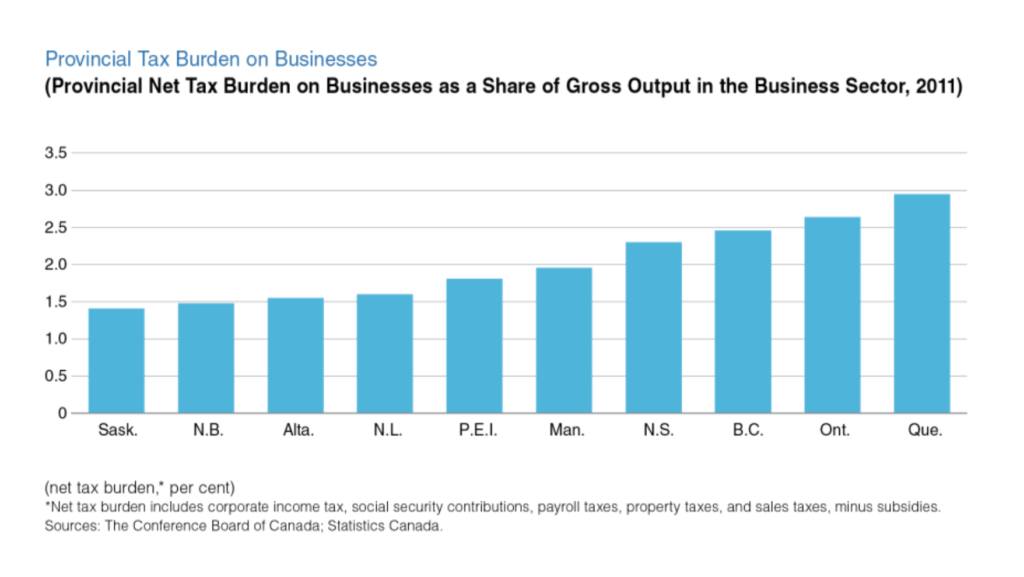