Looks like Canada Post’s reality check is in the mail 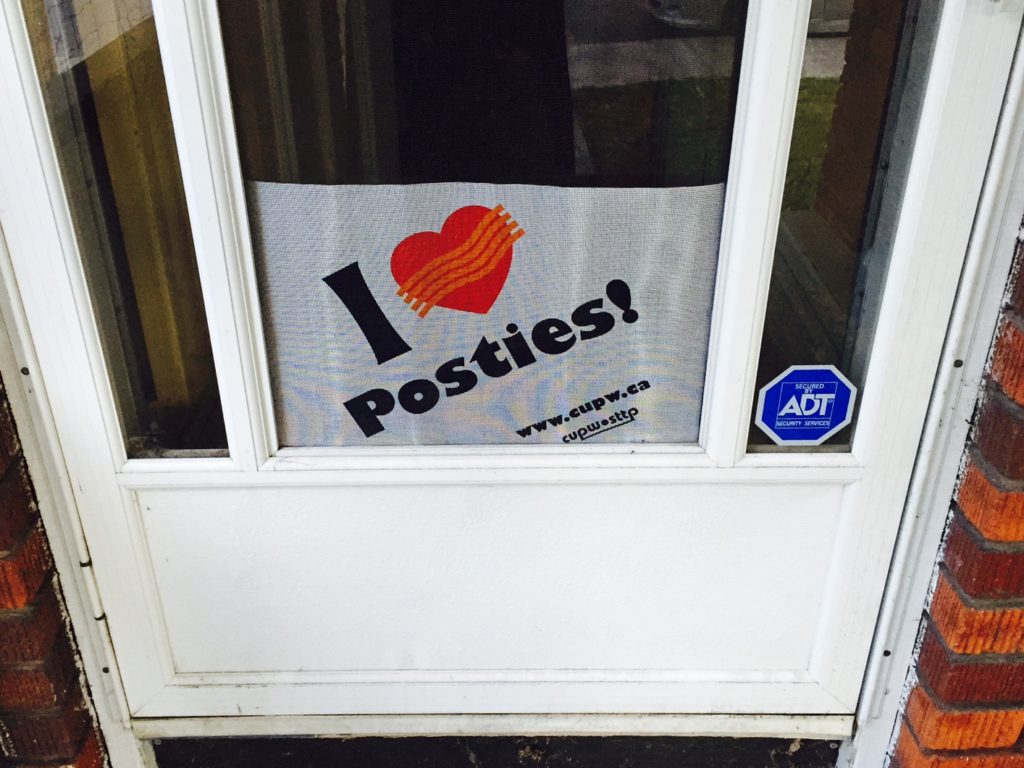 In the short term at least, it appears that Canada Post has backpedalled on its threats to lock out workers and shut down the postal system as labour negotiations continue. This is a remarkable reversal for a corporation that, during the last round of bargaining, enjoyed a very different result under a very different government.

The Canadian Union of Postal Workers has raised several key issues that have gained traction with the public and the media. But what’s changed since 2011 that has allowed this progressive narrative to successfully refute the corporate talking points and refocus the debate?

Well, okay: 2016. But while the principle of gender equity isn’t exactly new, it’s enjoying a parliamentary revival (thanks in large part to the tireless work of women’s rights organizations and catalysed by the UpForDebate initiative during the 2015 election campaign). Which means that when CUPW points out that rural letter carriers (the RSMCs), 70% of whom are women, make on average 28% less than their mostly male urban counterparts, the pay equity implications resonate. As Armine Yalnizyan pointed out in a recent interview, “you can’t call pay equity unreasonable or unaffordable: it’s 2016!” And it’s the law. (And it’s something PSAC previously successfully fought for with a complaint that started back in 1983 under another PM Trudeau).

Retiring in poverty? or with dignity?

Canada Post’s insistence that defined benefit pension plans are so yesterday is somewhat questionable, particularly given the recent debate about enhancing the Canada Pension Plan—which is all about defined benefits—and ensuring its viability for future generations. Apparently Canadians have a declining appetite for people retiring in abject poverty, and some governments are listening. The question is, will Canada Post?

And defined benefit aside: do you know the pension a retired letter carrier is entitled to upon turning 65? $24,500/yr after 35 consecutive years working for Canada Post. Is that too “gold plated” for a lifetime of work in a job that has among the highest rate of injuries in the federal sector?

The impact of a precarious economy and uncertain job market has resulted in tremendous public concern for the next generation. By resoundingly rejecting Canada Post’s insistence that future hires should be entitled to a less secure retirement than current workers, CUPW has made intergenerational solidarity an ongoing priority at a time when young workers are being told they may have to lower their standards, work for less (or even for nothing), somehow manage to pay off any student debts they have accumulated in the process, and--if there’s anything left over--save for an uncertain future where retirement is an increasingly elusive prospect.

Remember when the Harper government’s back-to-work legislation in 2011 forced an arbitrated settlement on the postal workers Canada Post had locked out just days earlier? Turns out, according to an Ontario Superior Court decision this spring, that legislation violated CUPW’s freedom of expression. It was an important and timely reminder of the legal rights of unions and workers in the current political climate that seems to have resonated even with some mainstream media. Certainly I don’t recall another time Canadian Business Magazine bothered to explain the difference between a lockout and a strike in case readers were confused about which party had actually threatened to stop the mail.

About that decision to cancel door-to-door delivery…

The current labour dispute, coupled with Canada Post’s threats to lock out its workers, comes less than two years after the crown corporation announced it would replace door-to-door delivery with the slightly less personable superboxes (or, as Canada Post preferred to warmly and fuzzily call them, community mail boxes). Not surprisingly, the public rebelled. Hundreds of municipalities called for a moratorium or an outright reversal of the decision. Both the Liberals and the NDP made door-to-door delivery an election issue, and when the Liberals were elected they announced a public review of the postal system that is currently ongoing.

About those annual profits…

Media outlets are now reporting much more consistently and accurately the fact that Canada Post is a profitable crown corporation. In fact, over the past two decades the only years where a profit has not been posted have been during work stoppages (so, profits for 19 out of the past 21 years). Canada Post is not taxpayer supported. It’s taxpayer supporting. Letter mail may be down, but there are more points of call than ever before, and e-commerce has resulted in record-setting profits for package delivery. Rather than crying poor and cutting services, Canada Post could follow the suggestion of its own (heavily redacted) report and reinstate postal banking—a “win-win,” according to the corporation—and a welcome alternative to cheque cashing businesses and payday lenders that prey on low income communities.

The public mood has shifted. Not only do people remember Canada Post’s last ill-considered cost-cutting stunt, they’re recognizing the deep disconnect between the priorities of the crown corporation’s Conservative-appointed CEO and the recent debates taking place in the broader arena. Retirement security, community enhancement, pay equity, intergenerational support, and the protection of our rights—including the right for unions to bargain freely—aren’t just important for CUPW and its members, they’re resonating with the broader public too.

It’s not the public post office that’s out of date. But given the current political climate and public sentiment, it seems Canada Post’s management needs a serious reality check.

Erika Shaker is Director of Education and Outreach at the CCPA (and married to a guy who works for the posties). Follow Erika on Twitter @ErikaShaker.

An earlier version of this blog post stated that a retired letter carrier is entitled to $23,000 upon turning 65. This number has been updated with the most recently available data.