As we continue to dig into university and college finances in Ontario, what becomes apparent is not only the change in revenue sources these institutions are experiencing (which we discuss here). There are also shifts in how and where institutions choose to spend their money.

The current strike by college faculty has helped highlight how institutions have chosen to compensate some of their employees, and the impact on both the quality of work available at these institutions and the quality of education they provide to students.

But the educational experience extends beyond the lecture halls—and the financial data is also instructive in determining what funding shifts for those other areas look like as well.

Take libraries, for example. The cost of higher education, its spinoff effect on libraries, and the ways libraries have chosen to respond to these financial constraints was identified some time ago in the U.S., but it’s useful to see how some of these trends are playing out closer to home (albeit within a system that—cuts notwithstanding—still has comparatively more public financing than its American counterpart).

The total amount of money spent on libraries is quite small when compared to the size of total university budgets. But in Ontario, spending on libraries, as a proportion of university spending, has fallen by over 15% from 2007 to 2016 in both average and median measures—a significant cut, particularly when considering the modest size of library department budgets.

The ways in which libraries spend differs across universities. However, we find there are two notable trends that are typical in libraries: as a proportion of total library spending, spending on both library acquisitions, and furniture and equipment have fallen over time.

There may be several factors driving the decrease in spending on library acquisitions. A shift to electronic resources and, perhaps, a growing reliance on open source resources may mean that libraries are spending a smaller proportion of their budgets on acquisitions. Or, perhaps, libraries are simply subscribing to fewer journals as prices increase (in conjunction with a less favourable exchange rate for the Canadian dollar). We know that what has been referred to as a publisher “oligopoly” (more in the natural and medical sciences, less in the social sciences) has been driving up journal subscription prices, leading a number of institutions to significantly cut back on the number of journals they subscribe to.

The decrease in proportional spending on library acquisitions, taken in conjunction with a decline in spending on furniture and equipment, suggests that libraries may be earmarking a smaller proportion of their shrinking budgets for items and priorities that make libraries a useful physical space on campus. It is noteworthy that this is happening as university enrolments in Ontario and nationally have continued to increase.

Not surprisingly, the largest expenses for libraries are related to staffing. As shown in the table below, on average, university libraries are also spending a greater chunk of their budgets on employee benefits. The data is less conclusive for salaries, however, which is likely as a result of the (relatively) small number of librarians employed in the sector overall.

Based on data from the Labour Force Survey, we do know that, nationally, the number of librarians and library clerks in post-secondary institutions has declined over time. But interestingly, the same data show that there has been an increase in the number of library staff in Ontario universities. However, if we look at librarians in both Ontario and Canada as a whole, as a proportion of all workers in the postsecondary sector, we find that librarians are becoming a relatively smaller group in the post-secondary worker landscape—while national and provincial (Ontario) enrolments continue to climb each year. Due to suppression issues in the data, we can’t specify the breakdown of jobs by type—librarians, other professionals, support staff, casual staff—in this category, so it is difficult to speculate about which categories of jobs are increasing, and which are not. (The Canadian Association of Research Librarians does provide more specific numbers in yearly reports on an institution-by-institution basis.)

We do, however, know that spending on library salaries as a proportion of overall university spending in Ontario has declined.

As in other sectors, both inside and outside education, dwindling resources and a downward slide on the administration’s funding priority list have resulted in some university libraries hustling for private funding sources. In some cases, student levies have been tapped as an additional source of dollars, further accelerating the university’s shift from a publicly-funded institution to a private one.

Declining funding for university libraries is particularly interesting in the broader societal context. These days, the relevance of libraries—as public spaces, as institutions of community learning, as repositories of educational resources, and as sites of resistance to a post-truth/alternative facts world—is a hotly debated topic. And no wonder, as jurisdictionally-overlapping austerity agendas have put libraries on the fiscal chopping block.

But the public push-back against these austerity-justified, financially-motivated decisions is not only impressive in its magnitude, it’s very much in keeping with what we know about broad public appreciation for and reliance on libraries more generally. And, incidentally, it also speaks to a new generation of librarians who are more than ready to passionately defend the importance of their profession, which has evolved extensively from the 1950-ish stereotype still trotted out in certain cost-cutting “what even means libraries?” circles. 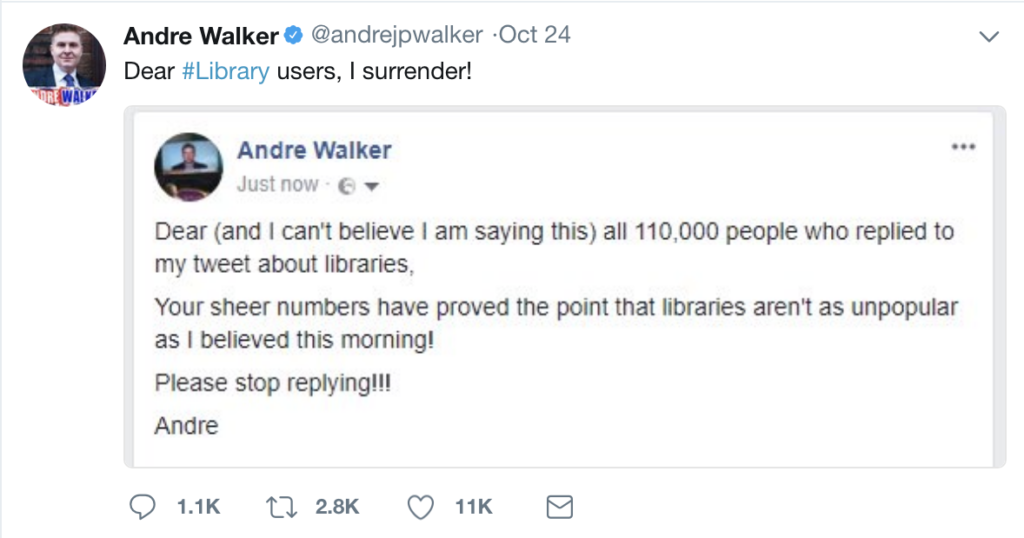 Given the impressive broader support for libraries—especially amongst millennials (who are, we understand, fairly well-represented at universities)—the decline in library funding in the university sector and the de-prioritizing of libraries as physical spaces seems particularly counterintuitive. It also suggests a decreasing emphasis on support for students at a time when faculty in both colleges and universities are raising concerns about the educational experience being provided, inside and outside the lecture hall.

Erika Shaker is Director of Education and Outreach with the CCPA. Follow her on Twitter@ErikaShaker. Robin Shaban is an independent economic and public policy consultant based in Ottawa. This blog is part of an ongoing project examining precarious employment in Ontario’s postsecondary institutions. You can read part one here, and part two of this project here.