Liberal election platform shifts the chips for the rich, takes a pass on the middle class

Yesterday the Liberals released a portion of their platform for the upcoming federal election. While I’m happy to see some overlap with our Alternative Federal Budget (AFB), I’m puzzled by the Liberals’ proposed tax changes, which basically just move tax money around in the top 20% of households without doing anything substantial for every politico's favourite demographic, the “middle class.”

Don’t get me wrong: we love when politicians take ideas from the AFB. But we’ve got much more effective ways of spending the $3 billion raised through a new tax on the richest families rather than giving a tax break to the next richest families. Let me break it down.

First, the good news: many of the Liberals’ platform items overlap with the Alternative Federal Budget. These include:

But after that it gets weird. The Liberals are proposing a change to the middle federal tax bracket, which currently applies to those earning $45,000 to $89,000 per year. They plan to reduce the rate in this bracket from 22% to 20.5%, which will cost the government $3 billion a year. This is being pitched as a “middle class” tax cut that will be paid for by the new bracket on the highest-earning individuals (those making $200,000 and above). Sounds good in theory.

However, if you combine the middle tax bracket change, the cancellation of income splitting and the new top tax bracket you get an unexpected result. Incredibly, the biggest beneficiaries of the Liberals’ proposed tax changes are those families making between $166,000 and $211,000 (the top 90-95%). These families get over $500 in tax reductions on average. On the other hand, the richest 5% of families pay an additional $3,300 a year. Under the Liberal proposal, the richest 5% effectively pay for a reduction in taxes for the next richest 15% with little change for any other families. 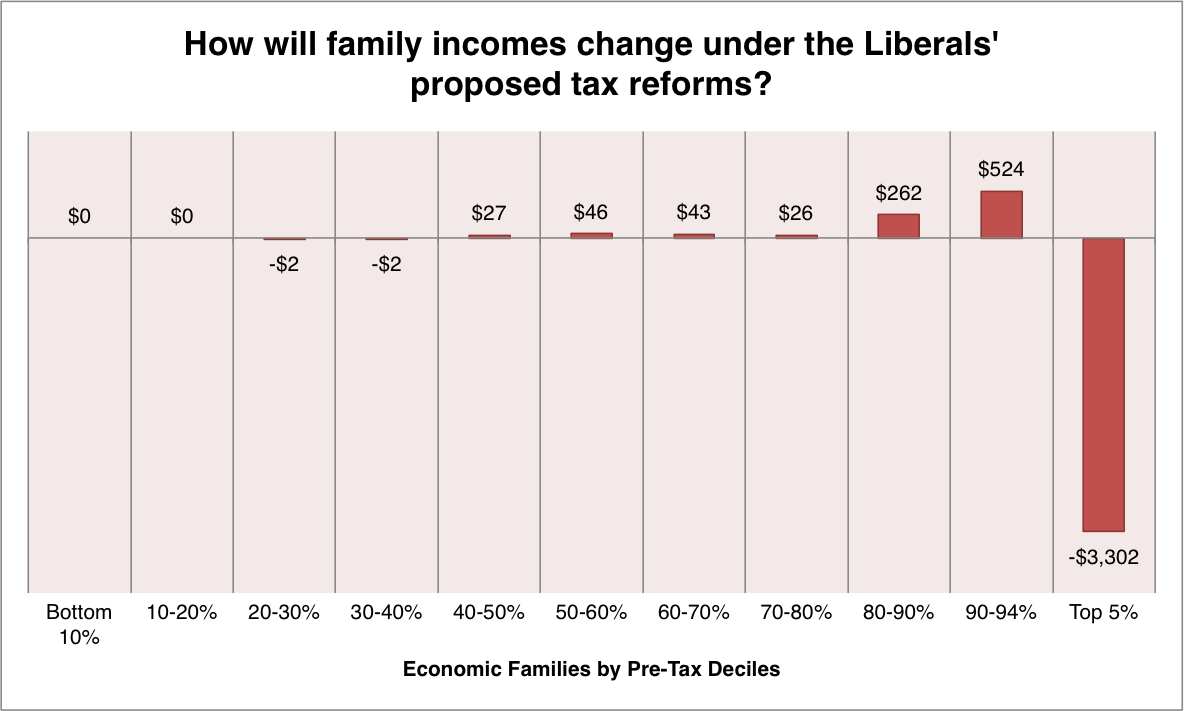 Why do the Liberals want to move $3 billion around to slightly change what the top 20% of families pay in taxes (some up and some down)? As a proportion of total pre-tax family income these amounts are almost insignificant. More importantly, you can do a lot of good with $3 billion a year besides shifting the chips for the richest 20%. The AFB has a long list of items that come in at or under $3 billion a year, such as:

Maybe the Liberals will include these items in later releases—we certainly hope so—but the point here is that there are more productive things to do with $3 billion than transfer it from the richest to the next richest families.

The Liberals also propose to combine the UCCB, CCTB and NCBS together into one cheque called the Canada Child Benefit (CCB). All of these programs currently send money to families based on family income and/or children’s age and number of children.

Fortunately, families making under $30,000 would see their annual child benefits go up by $600 under the Liberals’ CCB plan (for the first child). This goes part of the way towards what the AFB and Campaign 2000 believe is necessary to address Canada’s unacceptable level of child poverty (we’ve been calling for an increase of $2,300).

For the middle class, however, issues with children are more likely to revolve around childcare. Basically, it’s expensive and hard to get. Middle class families will certainly take more money wherever they can get it, but upping their monthly cheque by $150 doesn’t fundamentally change the fact that many parents have to pay more than $1,000 a month to put just one child into a spot they were lucky to find. The only way to create more spaces and reduce the price is to work together, through government. As I’ve said before, “we’re paying for $7-a-day childcare, we’re just not getting it.” Unfortunately, the Liberal proposal fails to address the real need of middle class families with children.