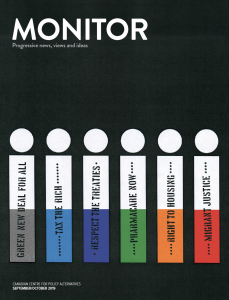 Canadian elections can be staid affairs. For all the talk of big change, campaigns tend to gravitate toward which party can be trusted to “manage the economy.” Trusted by whom? The coveted “middle class” voter, of course. Those at the higher-income end of that group are more likely to vote than anyone else, yet they have the least to gain or lose, relatively speaking, from a shift in government in any direction. The political imagination is stifled by this electoral reality; the options for meeting today’s overwhelming challenges drastically limited by the fiscal conservatism of a well-off minority.

Could 2019 be different? The pollster Nik Nanos claimed in June that climate change would be “one of the defining battle grounds” this election. “More important than jobs, more important than health care, more important than immigration.” In July, Abacus Data put climate change in third spot behind health care and cost of living, the latter an important issue (with the environment) for the two-thirds of registered voters from the millennial and gen-X age groups. If the polls are right, and those public attitudes hold, parties may be judged not on their ability to manage the economy, but on their plans to transform it.

As Monitor readers will know, the CCPA takes social transformation very seriously. It’s our jam, as (I think) the kids still say. Like we did in 2015, our special election issue (September/October) doesn’t pretend to be comprehensive, and we have no interest in telling you how to vote. Instead, some big ideas for transforming Canada are presented alongside expert assessments of the current government’s record and critical takedowns of right-wing propaganda—about immigration, equalization and deficits in particular—distracting voters from more important things, climate change high among them.

Five years ago, CCPA economists worked with the drafters of the Leap Manifesto to find the money it would take to rapidly de-carbonize and de-colonize the Canadian economy. They determined that an actually effective carbon tax of $200/tonne (compared to the current $30/tonne) would, on its own, raise $80 billion a year for investment in public transit, building retrofits and just-transition programs for fossil fuel workers. Modestly raising taxes for the highest-income earners and corporations, and closing tax loopholes that benefit only the rich, would add at least another $20 billion a year to this pot.

Obviously the leap hasn’t happened yet. The Trudeau government’s contested carbon tax was set too low to have any effect on emissions, and 90% of new revenue was spent on individual tax credits, wiping out the potential of the tax to fund a green transition. In any case, a federal recommitment to new oil sands pipelines seriously challenged our hope of lowering Canadian greenhouse gas emissions. Expensive tax loopholes remain open and a “middle class tax cut” primarily benefited higher-income earners.

Where we needed massive increases in spending on large-scale public projects, the government created “clear, long-term investment paths,” in the Canada Infrastructure Bank, for private hedge funds and institutional investors to profit from new or refurbished toll roads, buildings, and public services. Finance Minister Bill Morneau’s advisory council on economic growth, speaking on behalf of these decidedly non-middle-class people, called for “a pipeline of scalable projects with reasonable certainty” and “some source of revenue potential” (i.e., user fees). The government delivered.

In her Monitor article this issue, CCPA-Manitoba Director Molly McCracken catches up with Leap co-founder Avi Lewis, who has been touring Canada with other social justice leaders to promote the idea of a Green New Deal for All. Emboldened by strong U.S. momentum for a Leap-like transition—from a resource-dependent, highly unequal society to a better-paid and more sustainable one—these activists and organizers are making impressive inroads into Canadian mainstream debate, with polling data showing high levels of support for a Green New Deal here, too.

Leading off our election special, however, CCPA-BC researcher Alex Hemingway wonders why other big, democratic and socialist ideas that are popular abroad have less resonance in Canada. U.S. Democrats and the U.K. Labour Party have proposed measures to democratize workplaces as part of a wider economic transformation, including inclusive worker ownership funds, worker representation on corporate boards, and the “right to own” or buy companies that are set to be shut down. They are calling for much action to encourage and support co-operative enterprises, and seriously considering financial transactions taxes that would raise enough money to make all schooling free.

While the current federal government dithers with refined neoliberal methods of governing for big business (like the Infrastructure Bank and a new round of regulatory "modernization"), strange bedfellows are calling into question that defunct project. In a centenary declaration this year, the International Labour Organization asks governments to accept a “human-centred approach to the future of work,” including support for gender equality, universal access to social protections, living wages and the right to organize. In August, the Financial Times, a pro-market business paper, urged the U.S. (but really all countries) to “drop concerns around state planning” and realize “the need to transition to a worker-led economy.”

In her Monitor article on the 2015 election’s overblown fear of deficits, Sheila Block concludes, “a debate about who can spend less in government is the last thing we need.” With the threat of climate change so immediate, and money as cheap as it is now, Canada should be thinking bigger, demanding better, and spending freely and generously—not to manage the economy for the comfort of those at the top, but to transform society for the good of all.

Stuart Trew is Senior Editor of the Monitor, a bimonthly journal from the CCPA. Follow him on Twitter @stujt.