Home is where the heart is… or so the saying goes. And I can honestly say that no matter how it is depicted in the media, Detroit is a home that I will always come back to. But Detroit is steeped in a legacy of racism, violence, poverty, and oppression, and this history has much to do with the current woes of the city.

My mother had a well-paying job working for the Chrysler Corporation and was able to send me to an affluent private school in the suburbs. However, as an urban youth I felt displaced in the suburb of Grosse Pointe, and I was ill-equipped to grapple with the complexities of class and race relations that I experienced as one of the few black youth in a predominately white school. These misgivings continued through my university career as I traversed America, and now Canada where I reside as a doctoral student.

Which brings me back to where I began, to a place that is my heart and breaks my heart at the same time: the Motor City, Motown, Hockeytown, The D.

The picture below was taken a few miles from my childhood home, and it captures a march to unite community members against numerous justice issues, including air and water pollution. The sign that the kid is holding up that says ‘most polluted zip code 48217’ references a study done by the University of Michigan in response to the industrialization of that neighbourhood. 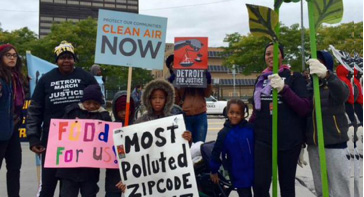 Industry, including coal burning, tar sands crude oil refining, steel production, and salt mining surround the residents living in the 48217 zip code of Detroit. The pollution from these sources combined results in approximately 1.6 million pounds of hazardous chemicals released into the community each year. In addition to the stench, the chemical releases result in serious health issues for residents. Wayne County, which houses this infamous zip code, has the highest number of pediatric asthma cases in the state of Michigan.

Also, zip code 48217 and the three zip codes that surround it have significantly higher rates of newly diagnosed cases of lung cancers than the rest of Michigan. But how and why are multiple chemical industries allowed to encroach a neighbourhood and affect it so negatively, and how long will residents need to march for their voices to be heard?

When I moved to New Orleans to pursue a master’s degree in public and environmental health, I found myself up close and personal with Cancer Alley, an 85 mile stretch of the Mississippi River from Baton Rouge to New Orleans. Despite hosting over 125 industrial facilities, unemployment is high in many communities near Cancer Alley and most residents do not have a college education--directly contradicting industry’s claim that they will train residents and increase employment rates in the communities that host their toxic facilities. 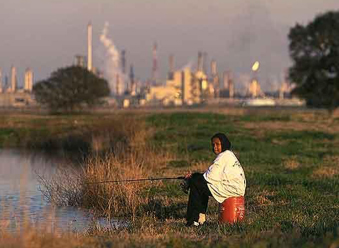 The inhabitants of Cancer Alley are primarily African-American, live at a low socioeconomic status (SES), and they experience higher than average rates of cancer (e.g., lung, rectal), asthma and other respiratory problems, reproductive difficulties, skin inflammation and rashes, and premature death. Although Cancer Alley continues to be a legendary toxic zone, the efforts of Louisiana residents to stand up against major corporations to ensure a healthy environment for their family and friends is an important social justice movement. It is both inspiring and disappointing to know that they have been organizing to limit the siting of toxic facilities in their neighbourhoods for about 30 years. As a graduate student in New Orleans I frequently encountered individuals who had never traveled outside of the city or state, and were extremely proud of that fact. I remember thinking, How can you know anything about the world if you limit yourself to one state? One city? One common mindset? But there is something to be said about the love and respect that you can hold for the city in which you were born and raised, and have chosen to inhabit for your entire life. They know the river, they know the people, and they are willing to fight for as long as necessary to reclaim the land and challenge the environmental inequities that they experience daily.

When exploring the theme of justice, it is important to understand how power operates in our society.

The platform for environmental justice emerged in the 1960s with the Civil Rights movement, as Black communities joined together to end racial discrimination and segregation.  As a term, environmental justice is used to identify that environmental hazards occur in patterns that disproportionately affect some groups rather than others, which means that the benefits (access to green space etc.) are also disproportionately collected. In addition to the relative privilege and oppression caused by the valuing of one group over another, these dualisms also assume that everyone fits into one category or another; erasing other forms of diversity.

Environmental educators have explored the impacts of climate change, unsustainable natural resource use, loss of biodiversity and ecosystem destruction, along with neoliberal ideologies that value profit over our collective environmental future. However, there is also a need for educators to “acknowledge the truths of colonization of Indigenous peoples and their Lands to heal the painfully damaged relationship between Indigenous and non-Indigenous peoples”.

Environmental education and Indigenous scholars have noted that decolonizing and Indigenous approaches to education can offer promising directions for (urban) environmental education, especially when engaging with environmental justice issues. Indigenous theories and practice understand the land as encompassing all of the earth, including urban considerations, while colonial settler narratives view the land as property. These two competing views can be questioned and disrupted, as students discover the connections between land and unjust treatment of Indigenous communities. This offers a meaningful opportunity for environmental educators and students (amongst others) to utilize the experiences afforded by land education to question educational practices and theories that construct Indigenous communities as abnormal while normalizing settler occupation of the land.

Recently, I spoke with a family member about writing this narrative, and described to her the types of social and environmental issues that I was trying to unpack. She said that my paper sounded interesting, but quickly added, I don’t know why those people don’t just move? If my kids were getting sick, or if my water was contaminated, I would move in a heartbeat. I remember, many many moons ago, having a similar response: Why don’t they move? Buy a new house? Find a better neighbourhood with better schools and more opportunities?

Now, I have a better understanding of issues surrounding justice and injustice, privilege and oppression, as well as the resultant environmental and social winners and losers. Those people cannot move… we cannot move. There is no real separation between them and us, only artificial borders and city-sanctioned zip codes.  Without capital, property, economic and social privilege, a voice… where do we go?

Environmental educators and students should critically (re)examine the industrial, technological, and moral impacts of capitalism (i.e., the relentless drive for growth and progress) on our urban and non-urban environments. Justice can link the environmental to the social, as the solution to environmental injustice is not a continual relocation of toxic wastes and pollution to different neighbourhoods. Instead, they should become we, and our strides toward environmental sustainability should courageously take a stand against injustice…together.

Jada Renee Koushik is a PhD Candidate at the University of Saskatchewan in the School of Environment and Sustainability. Her research with the Sustainability and Education Policy Network explores to what extent local influences (e.g. cultural considerations, place/land, policy environment) affect the development and enactment of sustainability in education practice and policy.

This commentary is based on a longer article (with references) in the winter 2017 issue of Our Schools / Our Selves which focuses on eduation and climate justice, and can be purchased here.