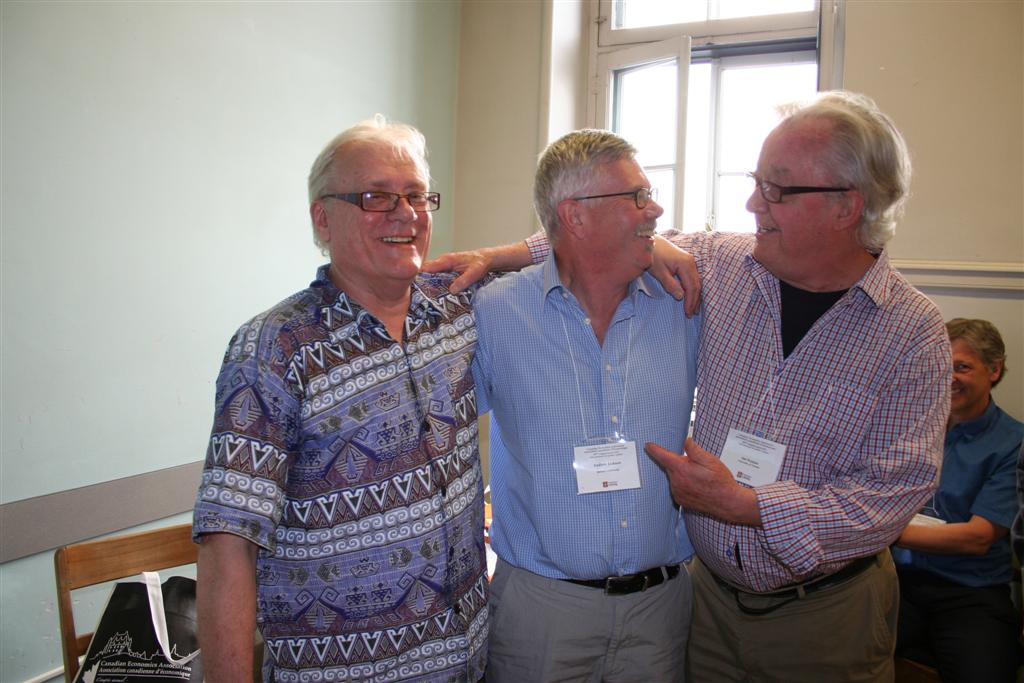 John (pictured, left, with Andrew Jackson and Watkins, his John Kenneth Galbraith Prize co-winners in 2008) was an inspiring and fiercely dedicated leader. His scholarly work, though impeccable, was not of an ivory tower vintage, but aimed at advancing economic and social justice.

I met John in 1982 at the North-South Institute. It was my first policy job since graduating from the School of International Affairs at Carleton University. I had heard about John, a larger-than-life figure, from his work in Africa with Julius Nyerere in Tanzania and Nelson Mandela in South Africa. Closer to home, he was also a central figure in Manitoba’s Ed Schreyer government brain trust.

Needless to say, I was a little awed. But John was a down-to-earth, unassuming person with a working-class Yorkshire accent and a wicked sense of humour. And so, my intimidation soon dissipated. Our joint project dealt with the 1980s global economic and financial crisis, the first orchestrated by newly ascendant neoliberalism. My contribution was the Mexican crisis that devastated the country’s economic model. Being mentored by John was a highly valuable experience that sealed my career as a policy wonk with a mission. John would later return to the North-South Institute as director and eventually its board chair.

After working for the Ed Broadbent NDP during the free trade debate of the 1980s, I ended up at the Canadian Centre for Policy Alternatives in 1991 and became executive director in 1994. Meanwhile, John pioneered the alternative budget concept, launching it with the Cho!ces coalition in Winnipeg and then provincially. Extending this totally original advocacy tool to the federal level was an obvious next step, and CCPA the obvious partner. Thanks to the financial support from then-CLC president Bob White, the Alternative Federal Budget (AFB) became a reality.

We finalized the first alternative budget in early 1995. We held community consultations across the country. We held national steering committee meetings with representatives from a wide array of labour and civil society groups. We held parliamentary roundtables and conferences covered endlessly on the newly created Cable Public Affairs Channel (CPAC).

It was a technically sophisticated budget complete with projected revenues and expenditures reflecting our priorities, and with credible fiscal framework and projections that were validated by the respected Informetrica. Not easily dismissed as a shopping list by the politicians, the AFB caught the attention of finance minister Paul Martin. He told us he would fall asleep before the TV with our conference running on CPAC and wake up in the middle of the night with the conference still playing.

Unbeknownst to us, Paul Martin was in the process of putting together a watershed budget that would change the course of federal politics for decades. He met with a group of us where we presented him an advance copy of the AFB. He was clearly impressed with our work. "This is very good," he said (a quote we used in subsequent AFB promotions). He told us he wanted to get to the same place as us, but by a different path. Yeah sure!!!!

As part of our promotion prior to the AFB’s release, John and I stopped in at the nearby Woolworth store, TV cameras trailing behind, in search of rubber boots to help us “navigate the muck on Parliament Hill.” The store manager quickly ushered us out. We also dropped a huge AFB banner from the CCPA office on the 8th floor of 251 Laurier—across the street from the Department of Finance and Martin's office. This too was carried repeatedly by the media to the displeasure of the landlord.

The AFB got a lot of media attention when it was released two weeks before the government's budget, with John, somewhat uncomfortably, the main spokesperson. The AFB sealed the CCPA’s reputation as the preeminent left think-tank in the country and set us on course to establish five provincial offices beginning with B.C. and Manitoba. The AFB was also a model and an approach that gained international attention.

John was an inspiration to all of us. A relentless soldier for social and economic justice at home and abroad. We have been blessed by his presence.

Still so vital, with so much left to do, John was taken unexpectedly, leaving many of us in shock. Rest in peace, John Loxley. You have lived a truly remarkable life. Your work was totally focused on the here and now, and on making life better for the downtrodden and disenfranchised.

My deepest condolences to your family. I mourn your loss.

Bruce Campbell is the former executive director of the Canadian Centre for Policy Alternatives.