Is the Federal Government Spending Too Little?

A talking point has appeared among right wing commentators that federal government expenditures are out of control and need to be cut back. They argue expenditures need to be cut so we can get back to a balanced budget. And they expect us to ignore the fact that we were going to get there anyway based on economic growth.

Something along the lines of the following graph is trotted out, showing that no matter how you slice it federal program expenses keep going up. Starting in 2006, when the Conservatives were first elected, spending continued to increase. Even after the current budget (the break in the chart) program expenses will keep increasing. And if something keeps increasing year after year, it must be out of control, right? 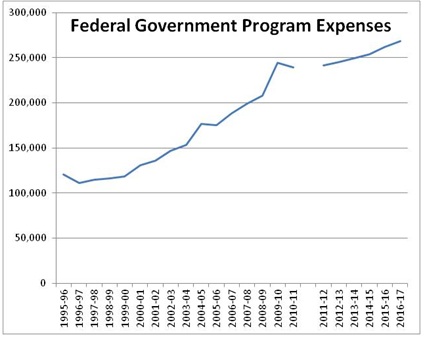 I’ve examined the prices of other items in the Canadian economy and the cost of everything seems to be going up. You name it, its price has gone up. In a shocking revelation from Statistics Canada, the price of apples has almost doubled since 1995 and the cost of a dozen eggs has more than doubled. The price of eggs seems to be hitting new highs ever year! Fruit flavoured crystals have largely avoided this explosion in cost, perhaps its because they don’t contain any apples…have you heard that they’ve almost doubled in price since 1995? 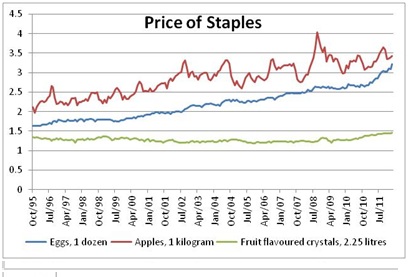 Of course the cost of everything goes up over time; inflation is a well understood concept (or should be). If one wants to continue to provide the same amount of service or buy the same amount of goods next year, it is going to cost just a little more than it did this year. This applies to governments as much as it does to eggs and apples. The fact that federal government expenditures increase year after year shouldn't be news to anybody.

It's pretty clear that some programs are growing more quickly than others, and it bears repeating what those programs are. By far the largest percentage increase comes from the growing National Security Establishment that encompasses the military, police, prisons and spies. This area has grown 35% since 2006. If we go a bit further back, DND grew 90% since 9/11 and Security & Public Safety programs grew a whopping 186% since 9/11. For more information see The Cost of 9/11.

Source: Fiscal Reference Tables and The Cost of 9/11

Certainly non-security program spending (ie all other services the federal government provides) have been growing, although much of that can be attributed to short-term stimulus spending that has now ended. Health transfers to the provinces have grown, although less than the average. Transfers to Persons have also grown—about half of this increase is due to larger EI expenditures as the recession hit. The other half is from larger old age benefit payments due to an aging population and improved access for low-income seniors.

But it is in a relative sense that we should be measuring government expenditures. Instead of just looking at expenditures as an absolute number, we need to divide it by the size of the Canadian economy or GDP. Then we can see how expenditures relate to something useful instead of just finding that program spending hits new highs every year, just like the price of eggs. 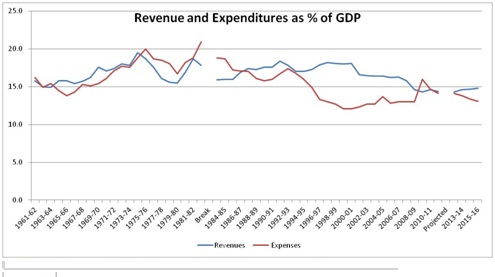 What does it mean to have all time lows in revenues? Well, it means that some people are paying far less tax—namely corporations and wealthy households. It also means that there isn’t enough money to adequately fund basic programs. That was certainly the case in the last budget, as programs were cut and OAS benefits were clawed back from young Canadians.

Having expenditures at all time lows means that programs are much smaller today than they were in the past.  We can see that with Employment Insurance, for instance, which used to cover 80% of unemployed Canadians and now covers less than 40%.

Having higher or lower expenditures and revenues as a percentage of GDP doesn’t result in larger or smaller deficits. If we raised both revenues and expenditures to, say, above 16%, the books could be balanced and we could improve existing programs like EI and implement new programs like $10/day national childcare.

Given the dramatic drop in government program spending as a proportion of the economy, the federal government is becoming too small. In times of stagnant growth, it does not have the capacity to act as a counter weight to debt-burdened households and corporations that aren't investing or creating jobs. Instead of lower unemployment and more growth, the federal budget has put the Canadian economy on the path to more unemployment and stagnant growth.