Is Money Enough? The Meaning of 6% and Flaherty's Health "Plan"

As Christmas presents go, this one was a shocker:  Over lunch on Monday, cash-strapped Finance Minister Jim Flaherty promised provincial and territorial finance ministers he'd increase federal funding for health care by six per cent each year for the next five years.  No strings attached. No negotiations.  A done deal.  With a catch.

The provinces and territories have five years to figure out how to make health care sustainable on their own terms, every Premier for himself.  After that, the Harper Government will contribute less, tying federal contributions to the growth in the economy, with a floor of three per cent.

That punts serious discussions about tackling growing health and regional disparities to the other side of the next federal election.  And it maintains the Harper government's "talk to the hand" stance on major changes in public policy which affect other jurisdictions, like the senseless census long-form debacle and the evidence-free crime and punishment agenda.

But, politics aside, what does the six per cent mean economically and fiscally?

For starters, it means one more year of a sure thing than what was on offer a mere 48 hours ago.

In terms of cold hard cash, the feds will put up $27 billion this year through the Canada Health Transfer. By 2017, when the deal ends, the annual transfer will have grown to $36 billion.

In the context of austerity and slow growth, a budget item worth $9 billion more in five years sounds generous. In the context of what the provinces and territories spend on health care ($130 billion), not so much.

A six per cent escalator for the feds translates into an increase of just 0.8 per cent in Alberta and 1.4 per cent in Quebec for next year.

That's because the federal role in medicare has been dramatically scaled back over time.

A Short History of Federal Support for Public Health Care 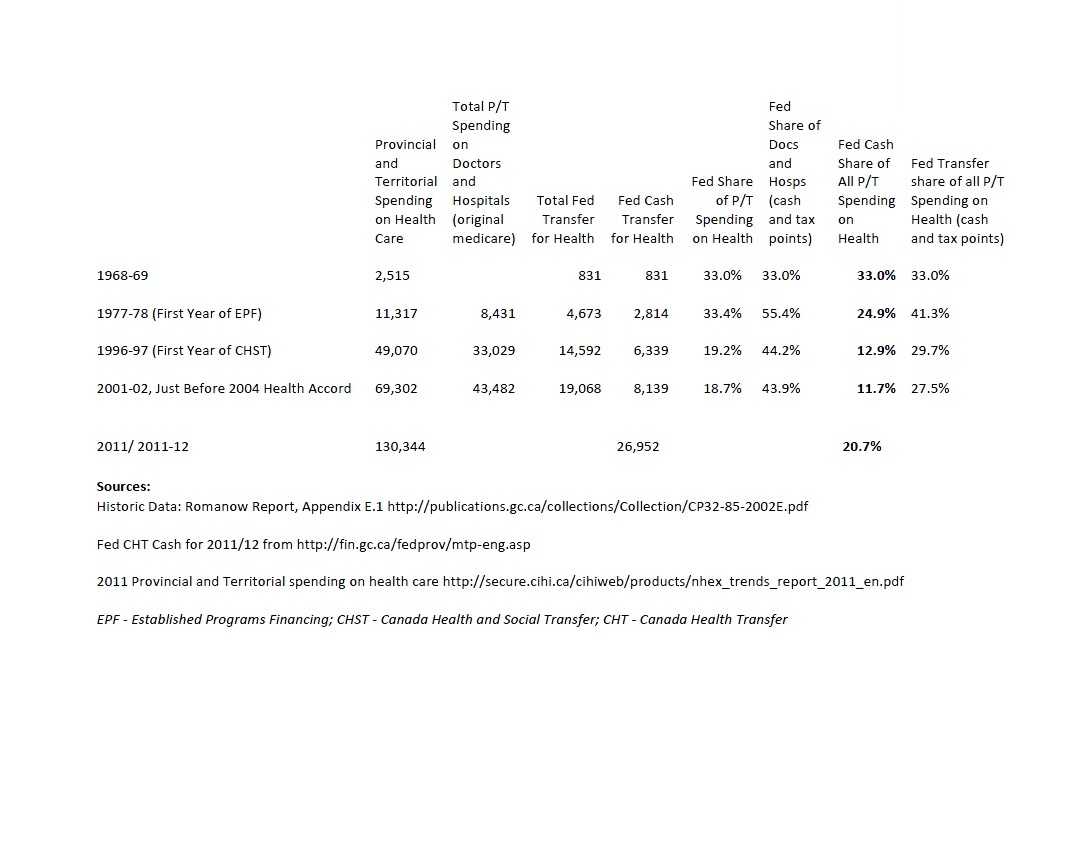 Widely perceived as a 50-50 bargain, the federal share of provincial and territorial health care expenditures peaked at 55 per cent of what was spent on doctors and hospitals in 1977-78, including transfers in the form of tax points, a feature of the new Established Programs Financing form of federal support to the provinces.  (Quebec had been seeking federal support in the form of tax points rather than cash for decades.) Federal cash only covered 25 per cent of what the provinces and territories spent on all health care that year.

Genuine cost sharing was most generous in the 1960s, when federal transfers for health care covered 33 per cent of provincial and territorial total health care expenditures.

By 2001-2, when negotiations for the 10-year Health Accord started, federal cash contributions covered 12 per cent of all provincial and territorial spending.  It had fallen even lower during the Troubled Times of the late 1990s, triggering the slogan for those who wanted a strong role for the federal government in assuring roughly equivalent access to health services no matter where you live across the country.  That slogan was "no cash, no clout".    It worked for most of the provinces too.  The deal, finally signed in 2004, guaranteed an increase in the federal cash contribution over time, with a promise that new money would buy change.

[You can click on either table to see in full scale.  The figures I cite include dedicated federal funds for the Wait Times Reduction strategy, which run out when the previously negotiated 10-year Health Accord expires, in 2013-14.]

It may seem generous to offer 6 per cent more a year when cuts are on the horizon for other programs, with public revenues and GDP  growing slowly.

It may seem generous to put an accumulated $26 billion more into provincial and territorial coffers over the next five years.

But the deal pales in comparison with the over $220 billion dedicated to tax cuts since 2006, or the 20-year, $490 billion commitment to refurbishing military hardware.

As costly as these other priorities are, nobody's scrutinizing their sustainability the way the future of public health care is regularly questioned.

If sustainability means bending the cost curve for health care, we need more than what Flaherty's Done Deal offers.  I'm not talking more money. The $26 billion over five years could buy important reforms if it's harnessed to that purpose; like our governments agreed to do in 2004.

The 2004 Health Accord was negotiated, not decreed. Everyone agreed, new money had to buy change. It provided an injection of $41 billion in new federal funds over 10 years to "fix" health care.

It named wait times, diagnostic equipment, pharmaceuticals and access to primary care as the biggest problems to fix.

Seven years later, we see that the provinces and territories delivered results on the first two problems and dropped focus on the last two.

Wait times for cataract, knee and hip and cardiac surgery and screening for cancers have fallen dramatically across the country. That means that in every part of Canada more citizens are getting more care more quickly.

You never hear about that.  The attention is always on what isn't working.  For sure, there is plenty of room for improvement; and Canadians want to see it.  And, as the 10 year 2004 Accord winds down, the question is: what is the most important thing for our governments to focus on improving right now?

The Harper Team boiled down the meaning of the 2004 Health Accord to an automatic escalator. That misses the point.  The Accord has shown that focus and commonality of political will, with a long-term financial guarantee, can bring about positive and meaningful change.

More money without a plan is just that, more money.  Canada's most valued social program needs a plan.  A plan that tackles growing disparities in health outcomes and growing gaps in access to care.  A plan that brings our best minds together, working in concert, to bend the cost curve by focusing on improving health and improving care.  It's possible, but it requires more than the blunt tool of cost control. It requires a shared strategy and focus on improvement.  A health "plan" without a plan is just a fancy way to say "devolution".