Is it time for a Canadian “daddy month”?

What makes for happy families? It turns out parents and policy makers could learn a lesson or two from their kids. 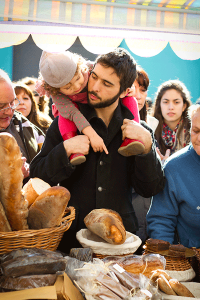 OK, I’ll admit it, there is one thing you can’t share—those nine awesome months of heartburn and swollen ankles. But the day your bundle of joy arrives, the sharing benefits start. In 2006 Quebec implemented a new paternity leave program to help fathers share more of the benefits and (yes, also the dirty diaper, and the middle of the night headaches) with mothers. Result? More fathers take time out after their kids are born in Quebec than in the rest of Canada. A lot more. Three times more.

The same is true in other countries with specific benefits for fathers. Countries like Sweden, where the introduction of the so-called “daddy month” produced a five-fold increase in the number of fathers taking time to spend with their new babies.

The immediate benefits to this are the well-documented positive impact on children. Children do better when they get more time with their parents. But you knew that already.

The secondary benefit of better sharing actually goes to the parents. Couples that have a more equal distribution of unpaid household work (including caring for children) report increased marital satisfaction. Because: “we don’t fight over chores,” said no couple, ever.

Programs aimed at supporting fathers are not a cure-all. It turns out ‘use it or lose it’ paternity leave only works if the program replaces a significant portion of what Dad would earn at his job. The programs that replace more than fifty percent of Dad’s wages (like the Quebec program, and similar programs in Sweden, Norway and Iceland) see the biggest increase in fathers taking more time to spend with their kids. The programs that only replace a small amount of Dad’s income (in Belgium, Austria and France, for example) don’t work nearly as well.

The amount Mom and Dad earn, prior to baby’s arrival, also has a big impact on who takes leave and for how long. The higher earner in the family tends to take the shorter leave. As long as the gap in men’s and women’s wages remains, fathers are going to feel the pressure to return to work sooner and spend less time with their kids.

And, of course, most of these programs are designed around parents who were in the workforce to begin with. One of the advantages of the Quebec program is it doesn’t require parents to have worked a minimum number of hours in the year before baby arrived. This is a big difference from the rest of the country, where qualifying for parental benefits means you have to meet the same requirements as you would for Employment Insurance—a barrier that is too high for many of the folks who work part time.

Paternity leave programs that offer a significant subsidy for Dad’s lost wages work well in the short term. Fathers are more likely to take some time off after their children are born. The balance of parenting and unpaid work is better. Everyone is happier.

Happily, the same does not seem to be true in the Quebec example. Women still take off the majority of hours for ‘family reasons’, but the percentage of hours men take off for family reasons in Quebec increased significantly immediately following the 2006 implementation of the Quebec Parental Insurance Program—rising from 15% to 20% -- and it has stayed at a higher rate subsequently.

Lesson four: walk before you run.

A Canadian daddy month would be a great first step for families. But it is only a step. In the long term, parents need safe, affordable places for their children to go while they are at work—because the vast majority of parents with kids under 3 work. Mothers and fathers need to see the gap in their paychecks close, so that the pressures (of paying for all that baby gear) and the fun (of watching your child discover how awesome that bouncy chair really is) can be better shared. Single parents need supports the address their struggles to balance it all.

Put those things together, and Canadian families are off to the races.