Is Canada backing away from NAFTA's unreasonable investment chapter? 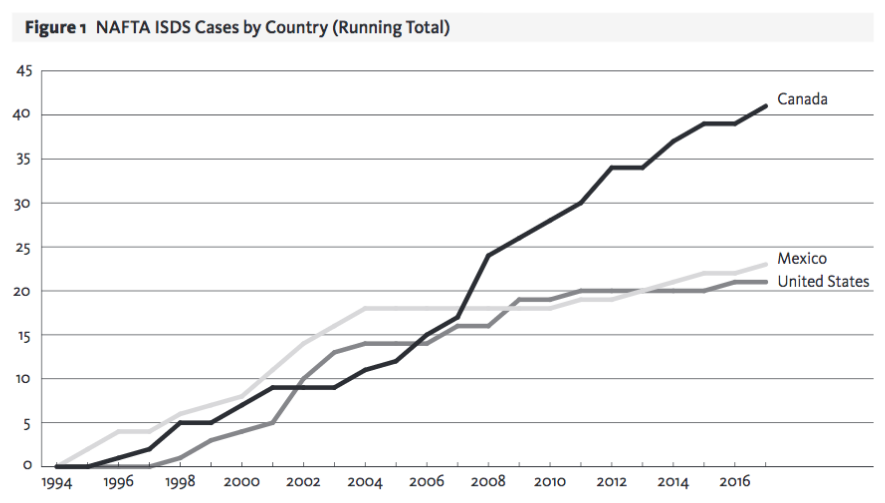 Inside US Trade is reporting today that the Canadian government is prepared to let go of NAFTA's controversial investor-state dispute settlement process (ISDS) in a renegotiated deal, possibly in exchange for keeping NAFTA's Chapter 19 review mechanism for antidumping and countervailing duty decisions by North American governments. This would be a very good thing for Canada and we sincerely hope the news is accurate.

The graph above is taken from Scott Sinclair's recent CCPA report on NAFTA Chapter 11. Sinclair maintains an up-to-date table of ISDS cases filed against all three NAFTA countries and annually comments on trends and major cases. As you can see, Canada is the most-sued of the NAFTA countries, and 25 of the more than 40 corporate claims brought against Canada since 1994 have challenged environmental or resource management decisions.

In one of the more recent claims, two out of three arbitrators declared that an environmental assessment of plans by the mining firm Bilcon to build a massive quarry on the Nova Scotia coastline discriminated against the company and violated its vaguely worded NAFTA rights to a "minimum standard of treatment." The company is now demanding hundreds of millions in compensation while the federal government and several environmental groups are challenging the decision in court.

Notably, the dissenting arbitrator in that ISDS case called the majority ruling "a remarkable step backwards" for environmental protection in the country. That's because with each such ruling governments are likely to become more nervous about saying no to unpopular and potentially damaging major resource or energy projects--which is why North America's energy and mining lobbies are so gung ho on keeping ISDS in NAFTA.

"It is hard to determine exactly why Canada is a favoured target of foreign investors and their lawyers," writes Sinclair in his paper. "But it is reasonable to conclude that the federal government’s persistent ideological commitment to ISDS and its demonstrated willingness to settle and pay compensation encourages investor-state claims against Canada."

If today's reports are accurate, and Canada has changed its mind about the need for ISDS in NAFTA, it would be a huge step forward for the environment and democratic governance more broadly.

Stuart Trew is Editor of the Monitor, a bimonthly journal published by the CCPA, and a part-time trade researcher at the centre.