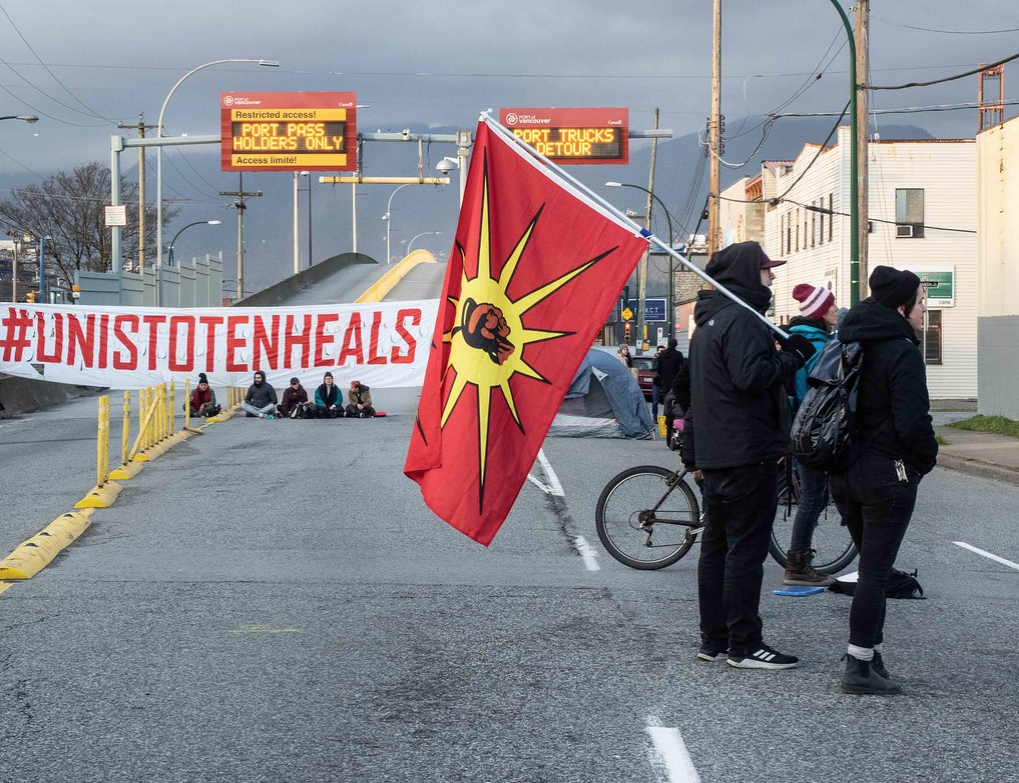 Indifference, said Antonio Gramsci, is “the mainspring of history.” By that he meant it is not the active few who determine what comes to pass, for better or worse, but “the absenteeism of the many.” The indifferent masses, he said, “allow the knots to form that in time only a sword will be able to cut through.”

"It's a whole damn army up there," said Chief Woos (Frank Alec), just ahead of the raids. "They've got guns on, they've got tactical gear on. They look like they're ready for war."

Twenty-one people were arrested and removed from the B.C. interior for blocking Coastal GasLink workers from accessing Wet’suwet’en lands. They included Unist’ot’en chiefs Howihkat (Freda Huson) and Geltiy (Brenda Michell), while they and other matriarchs were holding a ceremony in honour of missing and murdered Indigenous women and girls. Journalists reporting on the raids have been harassed by police, told to stop filming arrests, and in cases forcibly removed from the area, drawing condemnation from the Canadian Association of Journalists.

The raids have sparked outrage and solidarity actions across Canada on a scale we haven’t seen since Idle No More sprung to life nearly a decade ago. Dozens of people have been arrested for blockading B.C. ports. A protest shutting down the provincial legislature for a day forced a reluctant Horgan government to agree to meet with Wet’suwet’en chiefs. Another surprise B.C. solidarity action is planned for this afternoon.

Alongside these acts of solidarity, we have also seen a backlash, given much media airplay, from people who believe the provincial court’s injunction is, or should be, the end of the story, or who complain of being inconvenienced by its fallout. Premier Horgan angrily stated that people had been “denied access to their workplace” by the action targeting the B.C. legislature, then told media the Mohawk activists “haven’t got a clue…how complex these issues are.” On the other side of the country, Freeland told a media scrum after her meeting with Halifax’s mayor that all Canadians, including government officials, should be able to "go about their rightful and legitimate business.”

But legitimacy is exactly what the Wet’suwet’en chiefs and their Indigenous and settler allies are contesting. The Unist’ot’en is a house of the Gilseyhu Clan, one of five Wet’suet’en clans who have governed that part of B.C. for as long as anyone can remember. Though 20 band councils, who govern reserves in the area under conditions set out in the colonial Indian Act, have signed benefits agreements with TC Energy (owner of Coast GasLink), all five clans of the Wet’suwet’en “have unanimously opposed all pipeline proposals and have not provided free, prior, and informed consent” for work to proceed on Wet’suwet’en lands, according to the Unist’ot’en website.

The RCMP raid violates Wet’suwet’en law. It also flies in the face of a decision in December from the UN Committee on the Elimination of Racial Discrimination, which called on Canada to “immediately halt the construction and suspend all permits and approvals for the construction of the Coastal GasLink pipeline” until “the Wet’suwet’en people…grant their free, prior and informed consent, following the full and adequate discharge of the duty to consult.” The BCCLA and UBCIC have filed a joint complaint on the RCMP tactics and exclusion zone with the force’s Chairperson of the Civilian Review and Complaints Commission.

“There remains no more important relationship to me and to Canada than the one with Indigenous Peoples,” said Prime Minister Trudeau in his mandate letters to new ministers in December. The RCMP’s literal dismantling of a sign on Wet’suwet’en territory reading “Reconciliation,” which went viral on social media, calls this statement into question. Mi’kmaw lawyer Pamela Palmater noted how awkward it was that at the same time this was happening, the prime minister was on a multi-country tour of Africa seeking support from 54 African governments, many of which have appalling human rights records, for a Canadian seat on the UN Security Council.

“Canada does not deserve a seat at the UN Security Council unless and until they address peace and security in their own country,” she wrote. “Indigenous women and girls continue to disappear and be murdered, Indigenous peoples are grossly overincarcerated, and our children are stolen into the foster care system at rates higher than during residential schools.”

Rather than untie the knot that spawned both the Idle no More movement and current Indigenous protests, the federal and B.C. governments, by continuing to deny Wet’suwet’en title and appealing to contested notions of legitimacy and “the rule of law,” are making it tighter and more complicated. The least we can do, in the rest of Canada, is to not let inconvenience, or indifference to Canada’s obligations to Indigenous peoples, move events slowly, but surely, toward the intractable.

When our neighbours and friends are being driven off their land at gunpoint to make way for a fracked gas pipeline, let it kick us into action, not absenteeism.

Stuart Trew is Senior Editor of the Monitor, the bimonthly magazine of the Canadian Centre for Policy Alternatives.