If you haven't been to the library recently, you're missing out 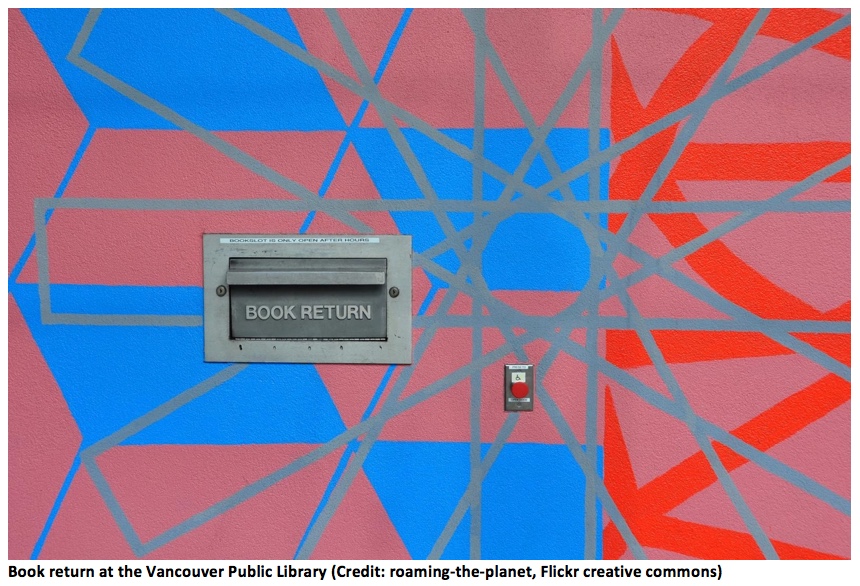 [A] library extends cultural services by providing everyone with an open area which serves as a venue for civil activity and creative ability. Libraries, which deviate from other cultural establishments, cover all fields of art and convey both information and experiences. Libraries do not present limits, rather they expand and unite different issues.

Growing up in Hamilton, Ontario, my family frequented two public libraries: the downtown branch, a gorgeous structure built in 1913 with funding from American steel tycoon Andrew Carnegie, and the charmingly named Terryberry Library, after the 19th century settler on whose Hamilton Mountain property it was built. The name “Terryberry” lent the otherwise ordinary-looking building a sort of fairy-tale feel, with the bonus of ensuring I never, ever mispronounced “library” as “lie-berry.”

As kids we spent hours there, checking out books using the old card system, and later researching school projects through card catalogues. Every summer we got an extended loan period so we could borrow extra books for the entire two months of vacation. Even now when I go back home to visit my parents I am likely to find at least one book that never made it back to the library, its card and due-dated envelope affixed to the inside cover like a permanent, ink-stamped guilt-trip.

In 1980, Hamilton opened a new and much larger main branch downtown with (at the time) cutting-edge microfiche machines. The building itself is connected to the mall and the farmers’ market it houses, another Hamilton institution I’ve been visiting since I was in utero. On Saturdays it was common to see people leaving through the library doors, fresh vegetables and baked goods in one hand, book bag in the other. And as we became more independent, no longer needing parental accompaniment, the library somehow managed to be both an occasion and a familiar hangout at the same time.

Lest anyone think the Carnegie-funded heyday of this quaint institution has come and gone, my kids still have “Library Day” at school. When they were younger it took the form of regular class trips to the branch down the street, where Sue the librarian would read them a story before they picked out a book of their own to curl up with. Today my family still visits the library weekly for books and movies. The automated checkout stations are, granted, much flashier, the banks of computers connected to the internet always fully booked. But the clubs and reading circles, the public events and meetings, the hushed areas for silent study, the books and periodicals remain everything they used to be. In spite of the “death of print,” libraries, it seems, are still a thing.

But, as with most public institutions, libraries are also in austerity’s crosshairs. The mantras are predictable: we can’t afford such an expanse of non-commercial space; nobody reads books anymore; kids do all their research on the interwebs. The attacks have ranged from cold cost-cutting assessments (KPMG advised the City of Toronto in 2011 to “rationalize the footprint of libraries to reduce service levels, closing some branches”) to sometimes-bizarre political musings. Toronto councillor Doug Ford famously and incorrectly claimed his Etobicoke ward had more libraries than Tim Hortons—apparently a crime against nature. His Hamilton counterpart Donna Skelly announced this year that any increase to the city’s budget must “be based on the role the library plays in modern society, and not the one it did 100 years ago.”

Newfoundland and Labrador announced in 2016 it would close over half the province’s public libraries, which would put 15% of the population more than a 30-minute drive from their nearest branch, and leave Fogo Island without a library altogether. For smaller communities it was a devastating decision. “Books are often scarce in these areas,” wrote Nick Farris in the National Post, “but their libraries, like Fogo’s, are not just repositories of printed words. They make the internet freely accessible, in places where broadband connectivity is not quite universal. They provide public space where movie theatres and sporting arenas have never been built.” The public was so enraged the government suspended the closures pending consultations and a review of the policy.

More recently, Saskatchewan planned to inflict $4.8 million in cuts to its public libraries, reflecting “the new reality for libraries in the 21st century,” according to a CBC report. "The future of libraries is leaning more towards electronic media,” said Education Minister Don Morgan. “I'm not saying you shouldn't have bricks and mortar, but there certainly is a shift.” Mere days later the government hastily backtracked. "We've heard from people pretty clearly that they value the library in its present form,” Morgan conceded. “It's important for them not just to have the electronic capability, but they also want to have the physical space to go to."

In both Saskatchewan and Newfoundland and Labrador the library as a structural feature may be safe, at least for now, but elsewhere the institution’s lifeblood—its librarians—is being sapped. Back in Toronto two smaller libraries recently extended their short hours, but with a catch: the facilities will not be staffed. Instead, empty buildings will be monitored through video surveillance, “to connect customers to staff when needed.” People can reserve or pick up books, and use the wireless, but the space will no longer be conducive to deeper research.

Librarians are more than mere monitors of the library space. Montreal’s Côte-Saint-Luc’s city hall lowered its flags when the town’s founding librarian died in recognition of her community contributions. In a public talk, the recently deceased Indigenous author Richard Wagamese paid tribute to the St. Catharines, Ontario librarian who changed his life by answering his questions, recommending books, and taking him to art galleries and the opera.

There is no question that, in a time of “alternative facts,” librarians have an even more vital role to play. We are inundated with information on a daily—even hourly—basis. The line between opinion and news is blurring, and conspiracy-based websites are proliferating, shared more easily than ever on social media platforms. In such an environment, the ability to find accurate, vetted information has never been more important.

And that is precisely what librarians were trained for. It’s no wonder they are helping design school curriculum and resource guides, and holding workshops to educate the public on what digital literacy and critical thinking means—in the immediate political context, yes, but as a general requirement for an informed citizenry.

Far from being outmoded or irrelevant, libraries continue to occupy a key place, literally and figuratively, in the hearts and minds of communities. They are increasingly at the forefront of municipal and architectural revitalization initiatives, and today, in both Europe and North America, they are combining traditional lending and preserving functions with new services of use to urban centres. The Ottawa Public Library, for example, offers video and audio streaming services, free access to hundreds of magazines through apps like Zinio, and the latest video game rentals.

According to the Pew Research Center in the U.S., a significant percentage of library users think branches should consider moving some books out of public locations to free up space for technology labs, meeting or reading rooms, or for cultural events, so that the institution can continue to play an evolving role for patrons. However, a comfortable (and growing) majority of users do not want the library’s footprint to be reduced. In fact, they would prefer to see more space for reading, working and relaxing. And two-thirds of library users in the U.S. aged 16 and older believe closing their public library would have a major impact on their community.

The numbers were higher for women, older adults, parents of young children, low-income Americans, African Americans and Hispanics, who are more likely to use library computers and wireless. Additionally, those who are more civically active, or have worked with others to address a community problem or try to affect government policy, are more likely to visit the library, often for public meetings. Libraries were also seen in the Pew study as helpful in seeking health care information or learning new technologies, providing information on community events and alerts about volunteering opportunities, and finding a job or obtaining job training.

Some newer libraries have integrated the ongoing and expanding role of the library into its physical design. Halifax’s central library, for example, includes space for cafes, auditoriums and video gaming, as well as areas to record podcasts or play board games. The Toronto Reference Library and Vancouver’s central library offer digital media spaces, and a recent expansion to the latter has added a theatre, silent reading gallery and rooftop garden. The Waterdown Library and Civic Centre in Hamilton is literally built into the topography of the surrounding area, incorporating a seniors’ recreation centre and various municipal services, and designed to allow the facility to evolve with the varied needs of its patrons.

Architectural novelty often provides an attractive financial justification for library construction or expansion. That’s because libraries can offer remarkable return on investment. According to a high-profile 2013 study, for every $1 invested in the Toronto Public Library, Torontonians receive $5.63, representing an economic windfall to the city of $1 billion. Similar stats exist for the Ottawa Public Library. And when the Calgary Public Library eliminated fees for library cards in 2015, annual visits jumped by one million people. Ontario public library usage is at an all-time high.

Numbers aside, the public’s fondness for libraries—both for their potential as future hubs for new services and as a popular physical destination—is a reminder that these public institutions, despite the rhetoric of rationalization, have the capacity to be as nimble as any Silicon Valley startup. What is a makerspace or neighbourhood tool-sharing kitchen if not mostly a trendy library? This should be particularly relevant to urban planners and policy-makers today, as so many other community spaces and support programs are being reduced or becoming unavailable.

Far from old-fashioned, the library’s version of sharing is innovative and—bonus!—sustainable.

This piece originally appeared in the July/August issue of the CCPA Monitor.