How the government's census strategy keeps us in the dark

What we don't know about Canada might hurt us. That's the title of a great article (with a cool gif!) from American economist and blogger Ben Casselman about what happened when the Harper Conservatives cancelled the mandatory long-form Census in June 2010 and replaced it with a voluntary National Household Survey in 2011.

What Canadians don't know about ourselves could hurt us too.

The long-form census—about 60 questions, mailed out to one in five Canadians, on a range of demographic, social and economic subjects—provides information that helps the public sector plan for and evaluate services for health, transit, housing and schooling. It guides our understanding of where labour shortages are emerging, and in what kind of occupations and industries. It helps your elected representative better serve you. It informs business ventures and marketing plans, and the activities of not-for-profit enterprises.

In contrast, the replacement National Household Survey is a useless tool when people who are too rich or too poor, too new to our country or too sick, on reserve or in rural and remote communities, do not voluntarily respond to the questions that help us understand how the family portrait of Canada is changing. We don't know what we don't know, and that could make all our decisions, public and private, of poorer quality, wasting our time and resources.

Here's a map[1] of who's been cut out of the picture, and how much our blind spots have grown since 2006, when the Harper government came to power. 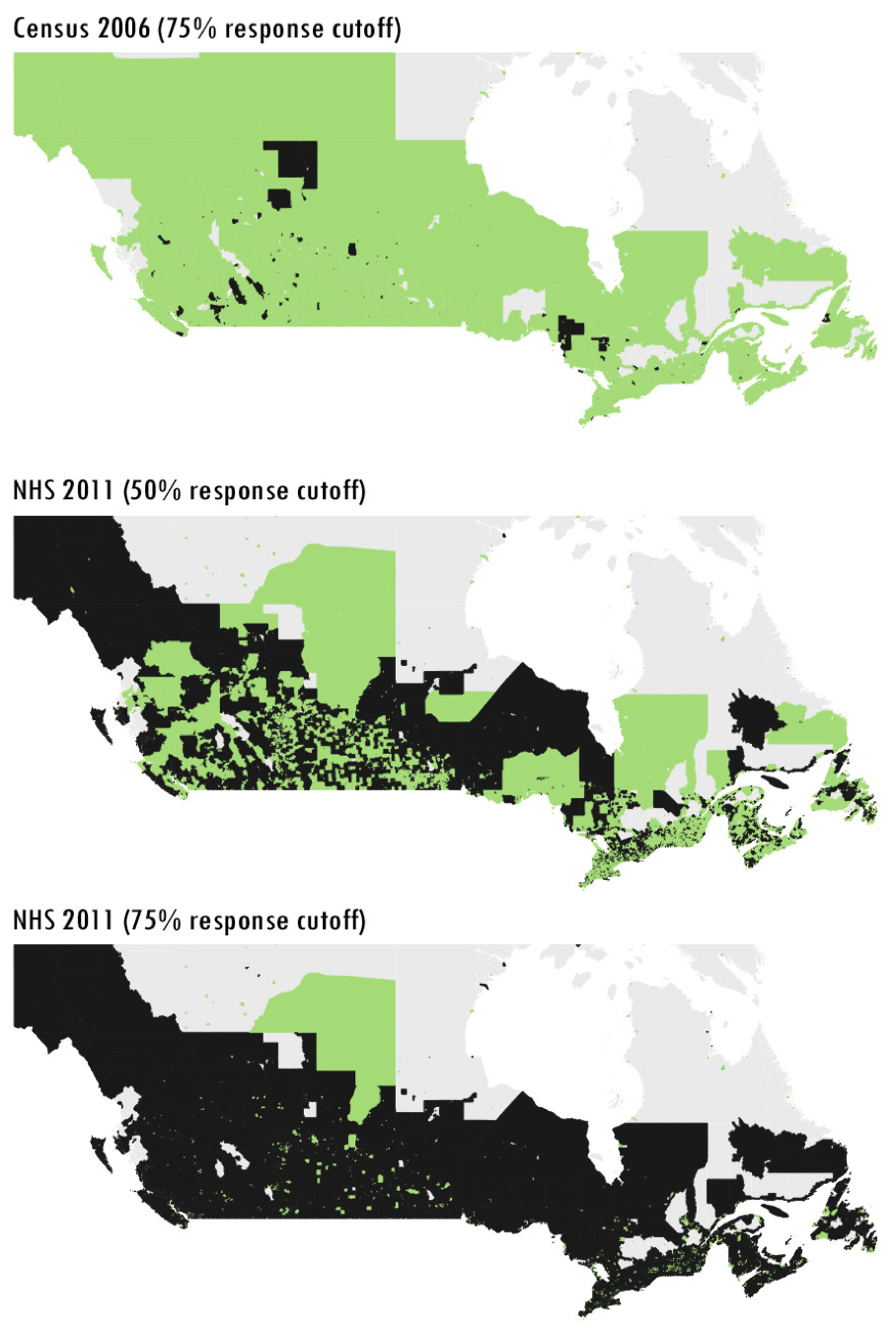 The middle map shows what happened when the mandatory questionnaire became voluntary—and relabelled the National Household Survey. In short, the response rate plummeted in some, but not all places. You can see by the growth in the black areas how many parts of the country had response rates below 50%.

Critically, the only reason we don't have more blacked-out areas is that, in 2011, 50% became the new, lower standard or cut-off rate below which Statistics Canada won't publish results due to lack of reliability. To illustrate the effect of the lower standard, the bottom map shows how much of Canada would have been blacked-out (no information published from the long-form census questionnaire) if the data reliability standard was the same as in 2006. That would have meant no area would have had their data published if the response rate was below 75%.[2]

The federal government is shooting out the lights on our own understanding of ourselves. We'll pay the price of groping in the dark soon enough. It's problematic everywhere for decision-makers in both the public and private (profit and non-profit) sectors. It will make the already super-sized problems in our biggest cities even worse. Cue the costly mistakes of inappropriate action or inaction, and the even more costly fixes.

Here is the stunning triad of maps showing what the blackout looks like in Toronto. Again, top map shows blacked out areas in 2006 (where Statistics Canada decided the data is not reliable due to response rates below 75%) in 2006. In 2011, there are more of these areas, even though the standard for reliability is dropped to 50% response rate. If you applied the 2006 standards of data reliability, when the Harper government came into power, to the story now (i.e., if today’s National Household Survey required a 75% response rate), most areas would be blacked out in Canada's largest city.

If you want to know whether the place you live is included in the current NHS data base, or if it would have been using the data reliability rules of 2006, put your postal code into the neat gizmo at the bottom of this terrific article, or just zoom in and out of the map. You can see how census tracts map on to ridings here.

The Harper government's strategy is leaving us more and more in the dark about ourselves, by reducing the amounts of official information we have and weakening its reliability. Who's adding information to the information society? The private sector. It's collecting ever-more data from you as you go about your daily life, which it then, of course, owns. This is not just an issue of proprietary ownership. It is also an issue of data quality. Just because information is disseminated in statistics may not make it "truth." It could just be truthy.

Beware of those who are trying to shoot out the lights on the public interest. Private interests are ready to shine the light on theirs.

[1] Maps courtesy of Dwight Follick. [2] Remember, this is not the response rate of the entire Canadian population, but that of a 20% sample in 2006. In 2011, when the questionnaire became voluntary, the government upped the sample size to 30%—and the response rate went down. Which doesn't create more reliability. It produces less reliable information, for greater cost.