The Holidays come with their traditional streak of family dinner parties. It's that time again, when —in addition to eating like there's no tomorrow— we must spend entire evenings discussing politics with our slightly redneck uncle, our niece who attends business school or our small-business-owner cousin. Every time, the unsavoury experience is followed by a slight feeling of uneasiness that drags along for a few days: "My God! Why didn't I think of replying this way when he said that?"

This year, with the government's uncompromising austerity policy in Quebec, this ritual ordeal might be even rougher than usual. To help you get through these hard times, here's a little survival guide for the Holiday Season to help you shut down right-wing arguments.

Since last spring's provincial elections, the new government has been ceaselessly repeating that, no matter what, Quebec's deficit will be $5.8G this year and $7.3G next year. The problem with these numbers is that they are complete fabrications. They only reflect the budgetary appropriations program pushed aside by the PQ government when it called the elections: it's a fictitious amount that the PQ would have revised downward had it won on April 7th.

It's worth noting that since 1972, government program spending stays around 21% of GDP. The only times when that mark was overstepped is during the last three economic crises (1982, 1991, and 2009). That means that public spending is under control in Quebec and has been for more than 40 years. 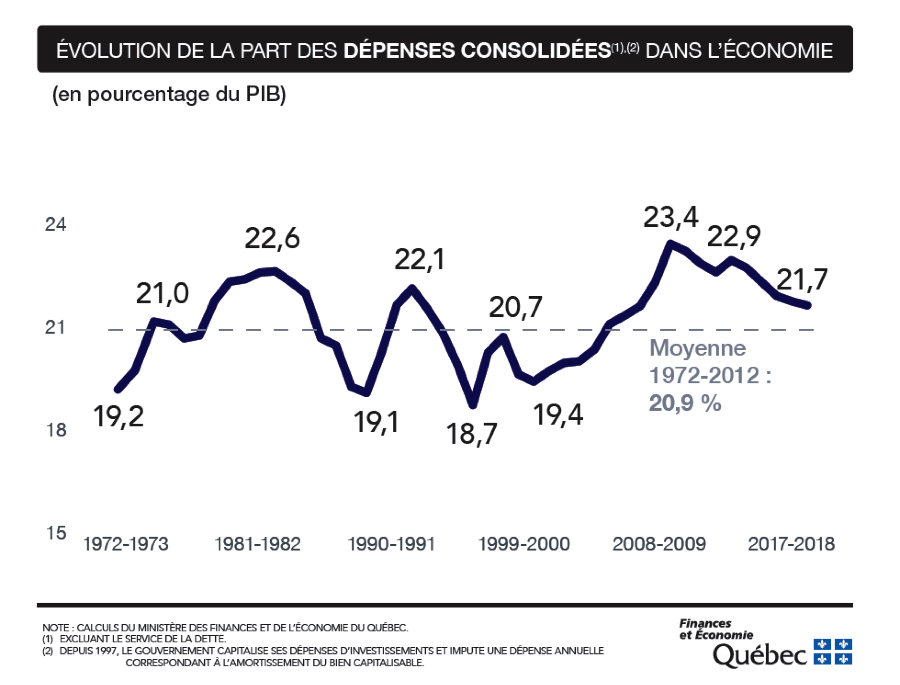 "You talk of austerity, but spending is always increasing!"

Even if the Premier stubbornly refuses to speak of austerity —he prefers describing his government as being the truthful one—, the facts prove him wrong. According to the December economic update, we are indeed in austerity territory. Couillard's government predicts a 2.4% increase in public spending, implying that his plan is miles away from one bent on harsh spending cuts. However, to have a better idea of the true evolution of program spending, it would be more accurate to talk of a 1.8% growth (by removing among other costs that of servicing the public debt).

Already, the picture painted by the government is revealed to be rosier than it should be. In addition, the rate of inflation sits at around 1.6%. We are therefore left with an actual growth in program spending of about 0.2%.

With a population growth currently just below 0.8%, we're clearly falling underwater in terms of real growth in the departments and organizations' budgetary capacities. Moreover, simply looking at the overall variation does not reflect all the individual cuts in spending nor the ideological nature of certain choices. The picture turns out to be rather bleak and austere in the end!

The debt, always coming back to the debt. It's impossible to discuss the topic rationally given the catastrophist discourse's impact on our minds. No, Quebec is not weighed down by its public debt. Let's first remind ourselves that only 15% of it is owned by foreigners. That means that when the government is paying out interests on its debt, it's paying 85% of them to people in Quebec. Furthermore, 30% of our public debt is controlled by the Quebec government. In short, New York creditors are not on our doorstep.

Moreover, it's equally false to claim that the situation in Quebec is any riskier than elsewhere. When Quebec's level of net debt (total liabilities minus the financial assets held by the government) is compared to that of other OECD countries, it becomes clear that Quebec's debt is in no way abnormal or catastrophic. Interestingly, this also holds true even is we take into account the hypothetical Quebec portion of the federal government's debt.

"Quebec is one of the poorer provinces"

This statement comes up more and more. We are apparently living beyond our means, off Alberta's prosperity and federal funding. This feeling of having to rely on others —entertained by the large sums received in equalization payments— is nonetheless misleading.

Concretely, the "record level" of federal transfers that Quebec receives in fact only comes up to a meagre increase. They will go from $2,390 per capita in 2014-2015 to $2,461 in 2015-2016. It's worth pointing out —in reference to a certain minister's comments— that $71 represents for each Quebecker no more than one coffee every other week, i.e. not much.

Moreover, in no way does it represent newfound generosity on the part of the federal government: it's nothing more than the rather technical implementation of the agreements binding the federal government to the provinces regarding how federal taxes paid by Canadians are redistributed. A good chunk of which is paid by Quebeckers by the way.

Is Quebec therefore winning at equalization and federal transfers? Here is how the amount paid per capita by Ottawa to the provinces evolved in % over the last decade:

Evolution in % of per-capita federal transfers over a decade, by province 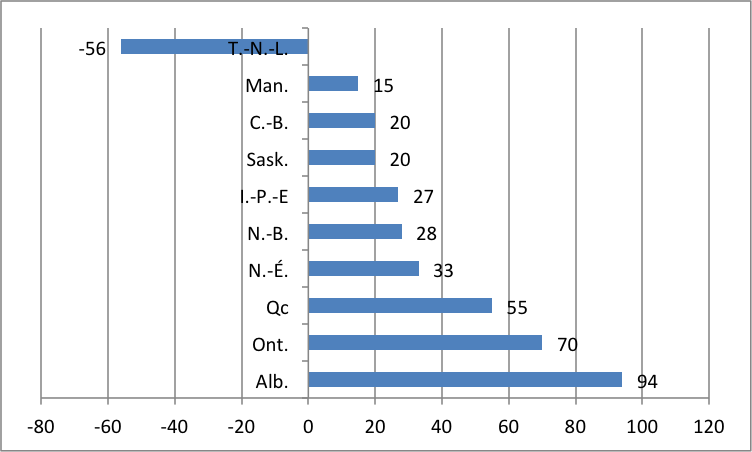 As you can see, with a 55% increase in the last 10 years, Quebec is in third place, behind Ontario and Alberta.

Regardless of all these debates, everyone at IRIS wishes you agreeable and pleasant family dinner parties during the Holidays and, why not, the strength to push through and come out alive.