At the same time, new research from the Metcalf Foundation points out that migrant worker recruitment is big business – for profit companies are making big money matching migrant workers with precarious jobs.

Ontario’s labour market has gone through a dramatic change since the turn of the century. The use of temporary foreign workers in the province is no exception. 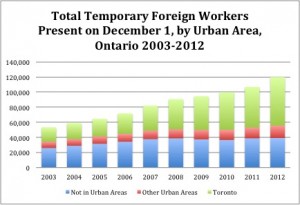 Right about now you may be asking yourself: where are Ontario’s temporary foreign workers finding work?

For a variety of reasons it’s difficult to paint a comprehensive picture of the type of work being done by temporary foreign workers in a particular region or province, but some trends are worth noting[ii].  The available data reveal that use of the Seasonal Agricultural Worker Program (SAWP) has increased substantially.  If we assume that all seasonal agricultural workers are located in non-urban areas, then the increase in the number of seasonal agricultural workers is primarily responsible for the increase in temporary foreign workers outside of urban areas. They’re coming here in bigger numbers than before to work in fields and greenhouses, most often in Southern Ontario.

From what we can tell, urban areas have a different story to tell.

Before 2002, the temporary foreign worker program was the domain of seasonal agriculture workers, live-in caregivers, as well as some short-term positions for highly skilled individuals. In 2002, in order to address short term labour shortages, significant changes to the temporary foreign worker program expanded the type of eligible occupations. The new list included all low-skilled occupations (occupations coded as C and D on the National Occupations Classifications Matrix).   Later, the program was expanded to include all occupations in all industries.

The temporary foreign worker program was created to operate as a complement to Canadian labour, not as a substitute. While the available data may not be definitive, high profile news stories from across the country (including B.C., Alberta and Ontario) suggest that the opposite is true.

In response to criticism, the federal government has announced new rules, as well as fines and other penalties for employers who abuse the system,  –  like those who bring in foreign workers under false pretenses or who fire Canadians in order to fill the position with a temporary foreign worker.

Ontario is currently facing persistently high unemployment, relentless long-term unemployment, high rates of involuntary part-time work and high levels of unemployment for new immigrants. Shoring up the temporary foreign worker program to protect against abuse and deter firms from using temporary foreign workers as a replacement for Canadians is a welcome move.  Better data could also go a long way to ensuring that employers are not taking advantage of a program meant to act as a complement to Canadian labour, not a substitute.

[i] Employment and Social Development Canada reports statistics on the number of Temporary Foreign Workers present on December 1st of each year.  Many TFW’s come to Canada as seasonal agricultural workers and are approved to stay in Canada for no more than 8 months at a time.  As a result, the statistics presented underestimate the total number of TFW’s present in Canada in any given year.
[ii] Employment and Social Development Canada reports the number of labour market opinions approved each year by region.  Citizenship and Immigration Canada reports the number of TFW’s in the Country, Province/Territory and urban area on Dec. 1st of each year.  But the two are not directly comparable “[b]ecause not all temporary foreign workers (TFWs) require a labour market opinion (LMO) to obtain a work permit.” Which means statistics contained in the Temporary Foreign Worker Program - Labour Market Opinion (LMO) Statistics cannot be interpreted as having a direct correlation with data published by CIC.”