Growing pains: What can be done about Ontario’s ever-rising child care fees?

Apparently, it’s not just prospective homebuyers being priced out of the GTA. How many young families can easily come up with an extra $14,455 a year, on top of other expenses?

Why $14,455? That’s the median annual cost of a preschool child care space in Toronto, according to our recent report (Time Out: Child care fees in Canada 2017). At $1,212 each month, it makes Toronto the most expensive city in the country.

While Toronto is the most expensive, it has company. Child care fees in Ontario’s major cities are consistently among the highest in the country. 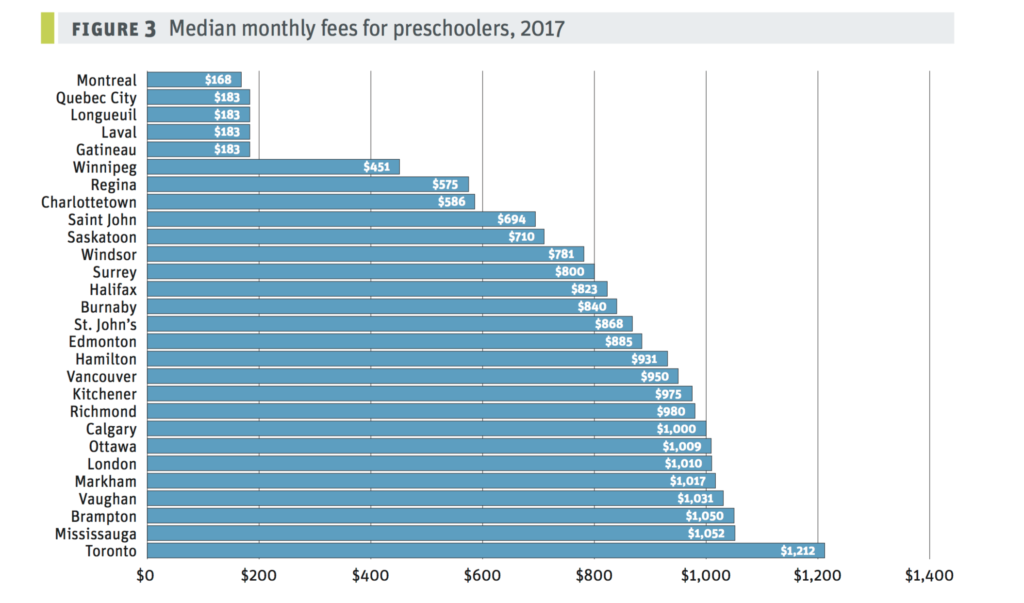 But, you may ask, why focus on the city centres? Surely cheaper child care could be found in rural communities.

Contrary to perception, it’s not just the latte-drinking big city babies who are bearing the high cost of child care; the fees paid in rural communities closely correspond to those in nearby urban centres. Location, it seems, is only an issue when it comes to provincial policy. That is, if fees are set by the government (as they are in Quebec, Manitoba and PEI), they are significantly cheaper than those in provinces with a market-based approach. Like Ontario.

That’s the other half of the child care fee picture: thanks to provincial policies, operational funding mechanisms and set fees, child care costs in Quebec provide a striking contrast for Ontario parents to ponder: median fees in all age categories at $163/month in Montreal, and only slightly higher in other Quebec municipalities. Manitoba and PEI’s fees, while comparatively low, are higher than those in Quebec due to lower operational funding and higher set fees.

There’s no question child care will be an issue in Ontario’s upcoming provincial election. The 2017 budget earmarked $200 million this year to fund 16,000 new child-care subsidies and 8,000 new spaces “to realize its target of providing 100,000 more children aged 0-4 with access to affordable, quality and responsive licensed child care in schools, homes, and communities over five years.”

This past summer, the Ontario Liberal government announced an additional $1.6 billion over five years to “help create 45,000 new spaces in schools, public buildings and workplaces by 2022,” making a commitment to move towards universal child care, to make child care affordable, and to address the issue of a low-waged workforce. At the time of these announcements, there were only enough licensed spots for one in four children below kindergarten age. More recently, the Liberals earmarked $12.7 million to help mitigate the fee-related impact of an increase in the minimum wage to $14 in January 2018.

Patrick Brown’s Conservatives have also recognized the importance of child care fees as an election issue, at least as recently as last month, in an “I see your 100,000 space-expansion plan, Kathleen, and raise you child care tax rebates of up to $6,750 per child for middle- and lower-income households up to $9,000 annually for kids under 6” sort of way.

There’s no question that alleviating the pressure of rising child care fees on (already squeezed) household budgets is bound to gain some political traction. But is yet another cash-for-child care plan a — or the — solution?

CCPA’s David Macdonald took a look at what the proposed rebates would mean for parents. Because those fees in Toronto (and, to a slightly lesser extent, elsewhere in Ontario) are already so high to begin with, the rebate would push those fees down to ... second highest in the country. So, for a Toronto family with an income of $62,000, (median) infant child care fees would still be a whopping $1,300 each month. And by June, those families would have reached the $9,000 cap, “above which nothing is covered.” The impact is slightly more substantial for toddlers and preschoolers but still out of reach for most parents. As fees continue to increase faster than inflation, “it is unlikely any increases to the PC rebate will match future increases,” explains Macdonald.

Another “wrinkle” to the rebate idea: only families making less than $35,000 could receive the elusive $6,750 PC tax credit. It’s unlikely that a family making $35,000 would be in a position to spend almost half that amount ($14,544/year) on a preschool space (paying the still-high monthly fees), then wait for the end-of-year tax credit compensation. And even if the Brown plan were to keep the existing low-income fee subsidy system, the waiting list for these spaces is at almost 13,000 in Toronto alone.

Beyond the limited impact of the tax rebate in the context of ever-increasing fees, child care advocates have raised other concerns. Given the poor track record of other cash-for-child care handouts, there is nothing to suggest that the funds would contribute to the sustainable spaces parents desperately need. It signals no commitment to creating a system of quality care, but instead the further reinforcement of a piecemeal, market-based model. There’s no commitment to focusing on not-for-profit or even regulated child care, which means public money is not being used as an incentive to improve system quality. Finally, there’s no commitment to the child care workforce itself; the child care educators who are in a low-paid, precarious state.

To make real progress on child care, we need high quality, not-for-profit, regulated services in a supported system. Parents need relief from fees that, due to lack of provincial engagement, are prohibitive. And ECEs need good working conditions and proper compensation for the important job they do.

The ingredients are clear. The need is unquestioned. And the benefits are profound. It’s time to get it right.