Green Words: Money Where Your Mouth Is?

In this (now) four-part post (Liberals, Conservatives, NDP) I wanted to take a look what the parties said in their platforms compared to what they actually want to spend money on...are they putting their money where their mouth is?  For each of the parties I've created two wordles or word charts.

In the "Mouth" word chart you'll see how they used words in the text of the platform.  Bigger words means that those words were used more.  The word "Canada" was dominant for all 4 parties so I removed it so smaller words would be clearer.

The Green "mouth" graph shows "Democracy" and "economy" as prominent and these were not as well worn as in other party platforms.  After that, there are many priorities without any particular ones sticking out.

The Green "money" graph is completely dominated by a carbon tax that would take in over $30 billion a year.  That tax would be recycled into Lower EI/CPP contributions for businesses which is equally prominent.  All other priorities are a distant second on the spending side.  On the still readable side are "income splitting", the "Carbon Tax rebate", "Corporate Income Tax rollback" and "Reduce military".  It shouldn't be surprising that the carbon tax and how it is spent dominate on the money side. 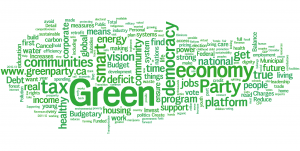 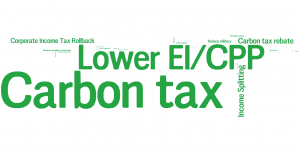