Gap year: The numbers you’re not seeing in the StatsCan tuition fee release 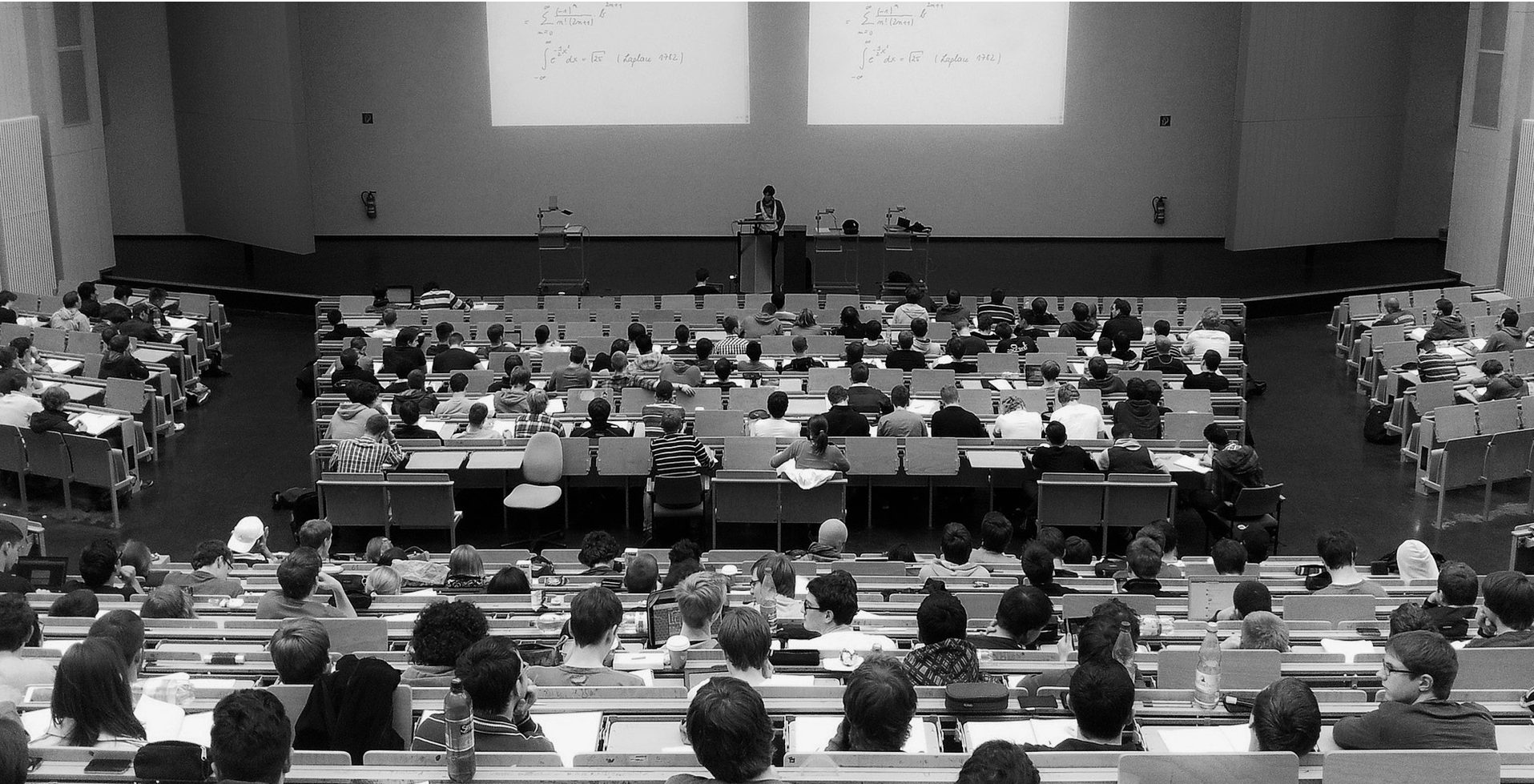 Education data nerds, are you ready? Statistics Canada has released their 2017 tuition fee figures. So, I checked. And guess what? They’ve gone up. Again.

At first, it all appeared very standard... But then I scrolled down and noticed something... different, this year. Specifically, what is no longer front-and-centre in StatsCan’s Daily tuition fee release.

But what’s missing is the once-central fixture — average provincial tuition fees. The data is still there — but in order to access it, you have to manipulate the tables, a distinct departure from previous editions. Which may explain the absence of these calculations from much of the national coverage.

The information that is most easily accessed  — and there’s a lot of it  — is demonstrative of a trend we’ve noticed unfolding over the past few years. In its release, StatsCan no longer lists a single average fee for each province. Instead, it now provides average fees by field of study in every province. Which, among other things, obscures the very thing that once made it easy to do a one-step provincial comparison (or at least limits it to someone with the ability to manipulate StatsCan data).

This is the logical extension of how provinces have chosen to manage the optics of declining levels of public investment in post-secondary education: regulating the rate of tuition fee increases, freezes (much less common), two-tiered tuition fees that differentiate in-province from out-of-province students, and sliding fee structures within provinces.

In effect, it’s acquiescence to the claim that identifying an average fee is less and less relevant. Because, in addition to the buffet of program-specific fees that make provincial comparisons tricky, StatsCan reminds us students may end up paying even less:

...there is an assortment of non-repayable financial support available, and this can vary across institutions and provinces. For example, scholarships, bursaries, government grants and tax credits can decrease the actual amount that students pay. According to the 2010 National Graduates Survey, almost two-thirds of students who graduated with a university degree had received such non-repayable financial support.

While at least one provincial minister in this portfolio (not to mention high profile university spokespeople) has been happy to make this exact argument, I don’t recall a budgeting caveat in previous iterations of StatsCan’s tuition fee update. But I’m happy to be proven wrong.

That said, if anything, additional data has been made available to provide a more complete picture of the degree to which the costs of higher education are being downloaded onto students and their families as provincial support — largely — recedes. But the decision to remove the focus from one annual snapshot comparison of provincial fees, and highlight a range of comparisons, focusing more on programs and less on provinces, is indicative of something more systemic.

I’m speaking not of the almost-universal fee increases, but of various provincial government optics management strategies in response to fee increases. How high can you let fees rise before having to appease angry voters by charging in-province students less or providing them with bursaries unavailable to out-of-province students? Or by reducing or even eliminating fees for specific groups of students and implementing a sliding scale for others? Is it possible to justify higher fees for certain programs based on probable higher incomes for those graduates?

When you start from the premise that higher education is an increasingly private fee-for-service transaction, eventually the reality of socioeconomic inequality kicks in. Governments have a range of options with which to respond, and the result looks a lot like what we are currently seeing — in effect, a hot mess of tuition fee and student aid policies.

The problem, of course, is that this makes the entire system of how we provide and who pays for post-secondary education exceedingly unwieldy and complicated (as we’ve explored in the past) to understand, quantify, and negotiate.

And when the starting point is a moving target with a variety of ever-shifting qualifiers — residence, province of study, program of study, income of family — it also makes it much more difficult to work for across-the-board improvements for all students and their families, thus continuing the slow march away from universality.

That’s not to say that the range of fees between programs isn’t important. Of course it is. But average provincial fees are a key starting point in examining which provincial governments have most downloaded the cost of university onto students and their families, and the ways in which they have chosen to allocate public funding. There’s no question that average fees must be contextualized, especially as student aid models become increasingly complex. But implying the average provincial fees are no longer significant because of their complexity doesn’t avoid a problem — it reinforces one.

So because I’m feeling nostalgic, and because these comparisons are still relevant, here are the average weighted undergraduate tuition fees, nationally and provincially, for 2016/17 and 2017/18, the percentage change, and ranking from 1-10 (lowest to highest fees). 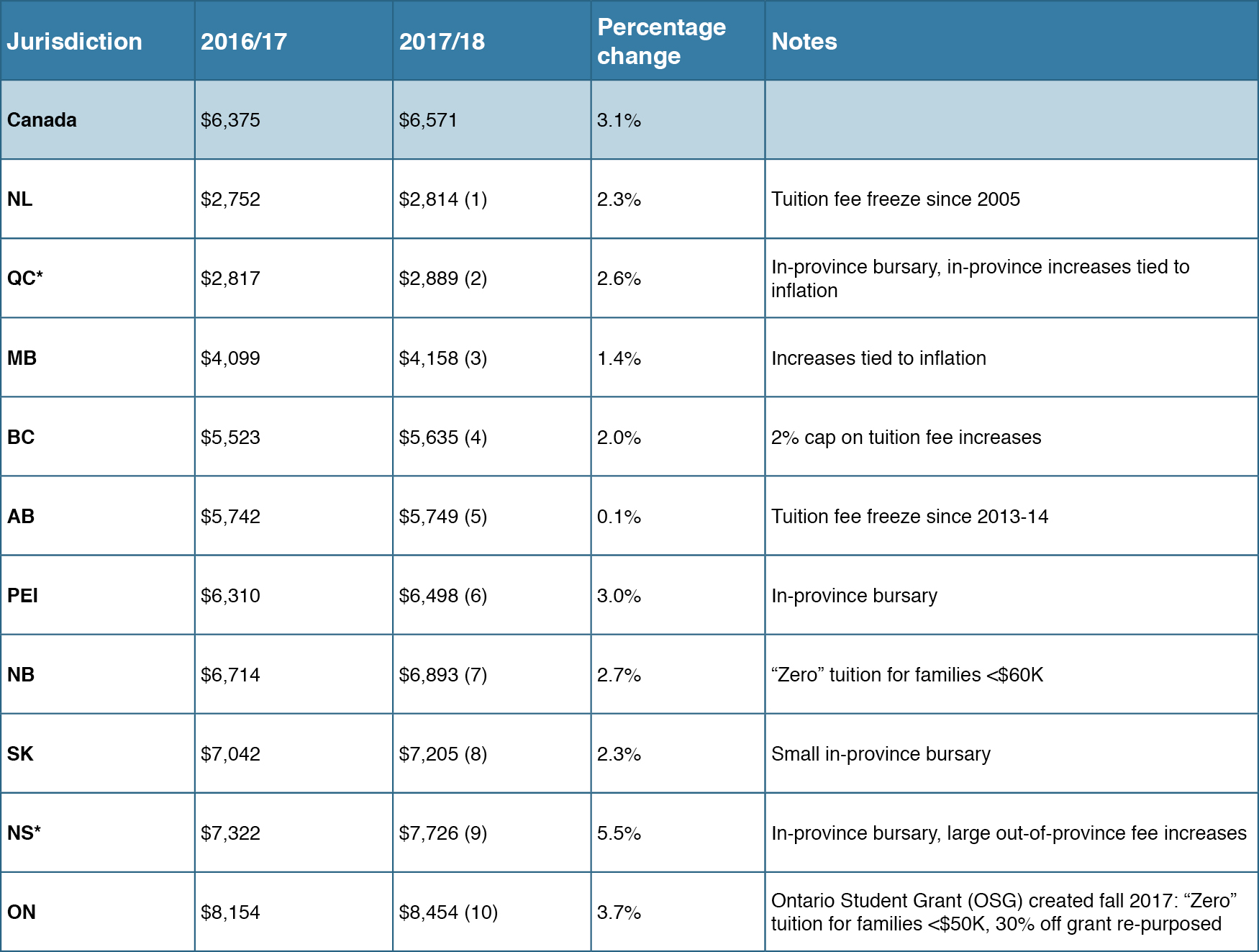 *For both NS and QC, the weighted fees reflect the average of differentiated in-province and (much higher) out-of-province fees. This is not the case for other provinces with a similar two-tier fee structure.

(Note: Alberta's fees were frozen 2013-14, then allowed to increase with inflation the following year, and subsequently frozen again in 2015-16.)