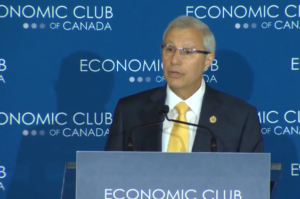 It is a ritual in Canadian politics: a new government comes into power, it reviews the books, and then expresses outrage at how badly the finances were managed and how the public was misled. Conservative governments then use these shocking “discoveries” to double down on privatizing and reducing public services.

That report, released today, was showcased in Finance Minister Vic Fedeli’s highly partisan speech to the Economic Club of Canada revealing some of the conclusions from the commission’s report—most notably, the claim that Ontario’s deficit is actually $15 billion.

In contrast to the strong tone in the minister’s speech, the report itself is actually quite measured.

Two major issues that the commission’s report addresses have been well canvassed before: the treatment of some public pension plan assets and the financing of the Fair Hydro plan.

With respect to the Fair Hydro plan, the commission agrees with the auditor general. And expert opinion is on its side on this one. The treatment was a financial sleight of hand trying to meet both deficit and hydro bill promises made by the previous government.

That ratchets the provincial deficit up another $2.4 billion.

The commission also agreed with the Financial Accountability Office that the previous government’s promise that program spending would grow by only two per cent a year would be hard to achieve.

“The question is whether this is credible with no specific plan of action or understanding of how dramatically constrained program spending would affect individual or programs and services.”

The commission also updated revenue and expenditure forecasts. It revised the revenue forecast down by a very modest $1.5 billion.

Overall, the report did not support the finance minister’s fiery, partisan rhetoric.

This new government is clearly intent on setting up a frame that gives it room to make policy moves it never promised on the campaign trail. Count on the government to use this fiscal shortfall as a cover to cut spending even more than it initially promised during the campaign. With health and education spending accounting for more than 60 per cent of program spending in Ontario, we know that these cuts will have an impact on these crucial public services.

Expect more wait times for hospitals and fewer nurses caring for us when we are sick. More delays in essential school repairs and a shortage of essentials crucial to kids’ education. And expect fewer supports for Ontario’s most vulnerable.

It doesn’t have to be this way. Ontario's new finance minister could have stood in front of the Economic Club of Canada, announced a bigger deficit than expected, and he could have taken the opportunity to tell corporate Ontario that we can't afford more tax cuts. After all, Ontario’s obsession with tax cuts is partly responsible for its revenue problem.

Sure, most new governments play this we found skeletons in the closet game. But fiscal conservatives use it as an opportunity to cut—and Fedeli's presentation today suggests that this government is paving the way for cuts that will be fast and deep.

Sheila Block is a senior economist with the Canadian Centre for Policy Alternatives’ Ontario office. You can find her on twitter at  @SheilaBlockTO.