Five things to know about the next Ontario budget

With winter just getting started in Ontario, spring may seem far away. But sometime around the end of March, the provincial government will table the 2020 Ontario Budget.

By now, many Ontarians can recite the government’s talking points by heart. The government says spending is too high, our deficit and debt are unsustainable, and we have to cut back. It’s just math, they say.

But it’s not just math. It’s politics–right-wing politics that aims to downsize the public sector, cut taxes, and boost business profits while putting downward pressure on wages. It’s a recipe for weakened public services and (not coincidentally) greater income inequality.

It’s not good. So if you’re a supporter of strong public services and reduced income inequality, it’s worth knowing a few key budget facts:

1. Ontario does not have a spending problem.

For several years before its defeat in 2018, the previous Liberal government boasted that Ontario program spending per capita was the lowest of any province in Canada. They weren’t lying. Last year’s election of a cost-cutting Conservative government did nothing to change that.

Ontario is not just last in per capita program spending; we spend dramatically less than other provinces. According to the Financial Accountability Office (FAO), Ontario’s per capita, per year spending is around $2,000 less than the average of all the other Canadian provinces (see chart below). 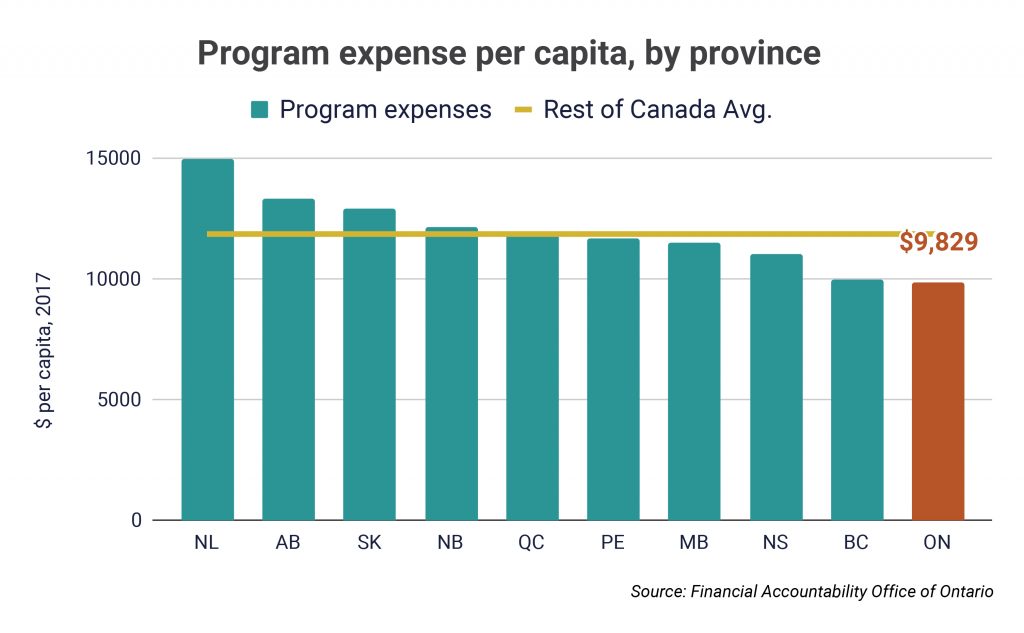 That’s a big number. There are more than 14.5 million Ontarians now. If we spent money on programs at the same rate as the average of other provinces, we’d be spending $29 billion more a year on health care, on education, on social services, on public transit, on affordable housing, on child care–you name it.

To put $29 billion in perspective, it’s roughly how much we spend to run our entire public school system, with two million students.

So why don’t we have that extra money to spend? Because we don’t bring in enough revenue. Ontario now brings in about $2,000 less per person per year in revenue than the average of the other provinces.

In the Canadian context, Ontario is a low-spending, low-tax jurisdiction. Our problem is not that we spend too much–far from it–it’s that we don’t bring in enough revenue to pay for the things we need.

2. Ontario’s deficit and debt are stable and sustainable.

Right-leaning commentators like to compare government budgets to household budgets. When you’re spending more than you’re taking in, they say, your financial position is getting worse, and it’s only a matter of time before you go bankrupt.

But what’s true for households is not true for governments. A government’s ability to pay for its debt depends on the health of the economy as a whole, typically measured as Gross Domestic Product (GDP), and on the interest rates on its debt.

Interest rates on Ontario’s debt have been falling for a generation, and interest payments as a share of provincial revenues remain at historic lows. Meanwhile, Ontario’s economy is growing at a faster rate than the government’s debt. This means our debt-to-GDP ratio–a standard measure of fiscal health–is improving. In other words, Queen’s Park’s financial position is getting better even though we are running a deficit.

That may be one reason why the Ontario Chamber of Commerce has urged Queen’s Park to prioritize investment in public services and infrastructure over debt reduction.

Perhaps the clearest indication that Ontario’s finances are doing just fine is the insatiable appetite of investors for Ontario government bonds. On November 19, investors snapped up $750 million in Ontario Green Bonds (with a modest interest rate of 2.65 per cent) in a matter of hours.

3. Ontario is richer than ever.

As the recent federal election showed, many Canadians are deeply concerned about the affordability of everyday life. Here in Ontario, the general mood of austerity emanating from the provincial government creates the impression that the province must be facing deep economic difficulties.

This is not the case. Ontario has never been richer.

A common way economists assess the prosperity of a jurisdiction is to calculate GDP per capita (per person). To compare changes in GDP per capita over time, this number can be adjusted for inflation. When we do this for Ontario, we see that inflation-adjusted GDP per capita was at a record level in 2018 and is forecast to exceed that number in 2019. 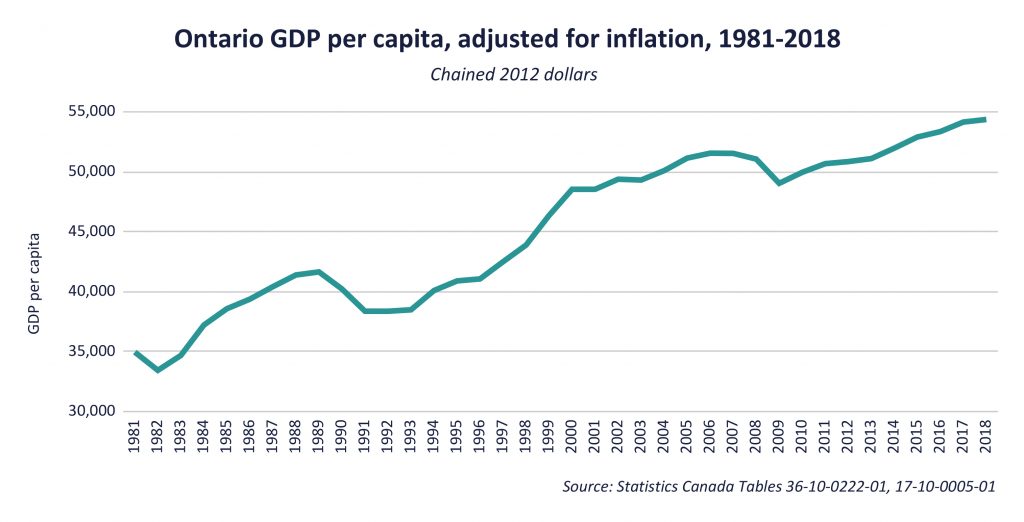 So why do so many Ontarians feel broke? Why is our government acting broke?

It’s a question of distribution. Over the last number of decades, the history of market income in Ontario is a story of struggle for those at the bottom, barely noticeable progress for those in the middle, and great leaps forward for those at the top (see chart below). 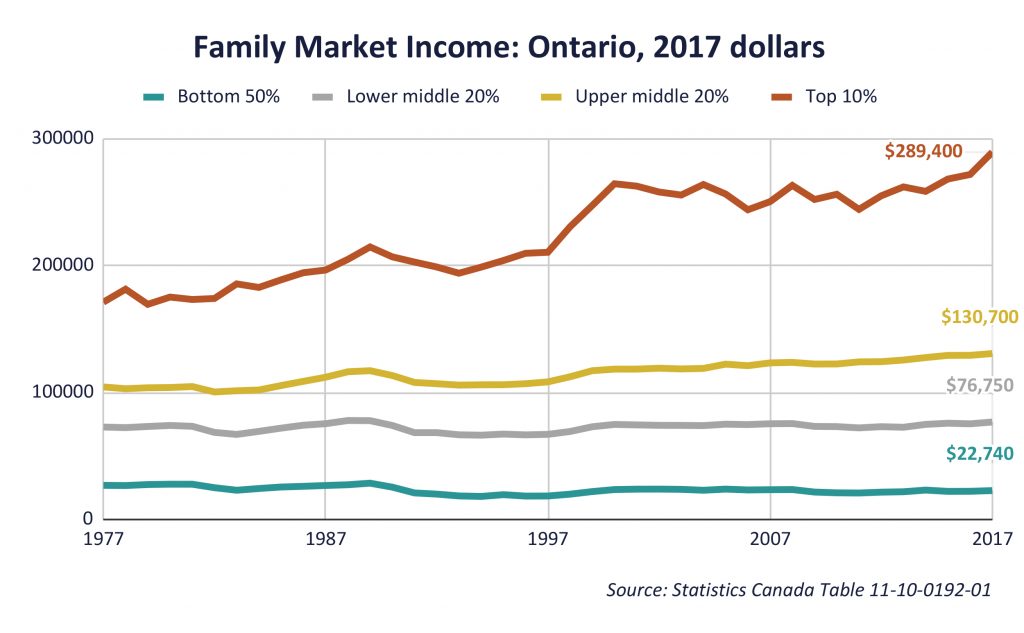 Where income goes, wealth follows. As the CCPA’s David Macdonald has reported, in 2018, the richest 87 families in Canada had a net worth of $273 billion, or about $3 billion per family. There is plenty of wealth in this country, and Ontario has its fair share.

4. We can afford to tackle Ontario’s problems.

The best way to address all of these problems in a serious way is through government spending. The fairest way to raise the money we need is through a package of progressive tax reforms. We can meet the challenges we face from increased inequality and the climate crisis–if we do it together.

5. We made a video about all this.

At the Ontario office of the CCPA, we’re committed to putting forward ideas to make the next Ontario budget as progressive as possible. To do that, we’ll keep publishing blogs, opinion pieces, and reports in the months to come.

But we also want to bring more Ontarians into the conversation about the next budget. To do that, we’re produced a short (five-and-a-half minute) video that’s designed to be viewed online or in local meetings. Check it out at www.policyalternatives.ca/ontariobudgetvideo2020, and watch for more updates.

Randy Robinson is the Ontario Director of the Canadian Centre for Policy Alternatives. Follow him at @Randyfrobinson.