Five reasons why the deficit should be bigger, not smaller 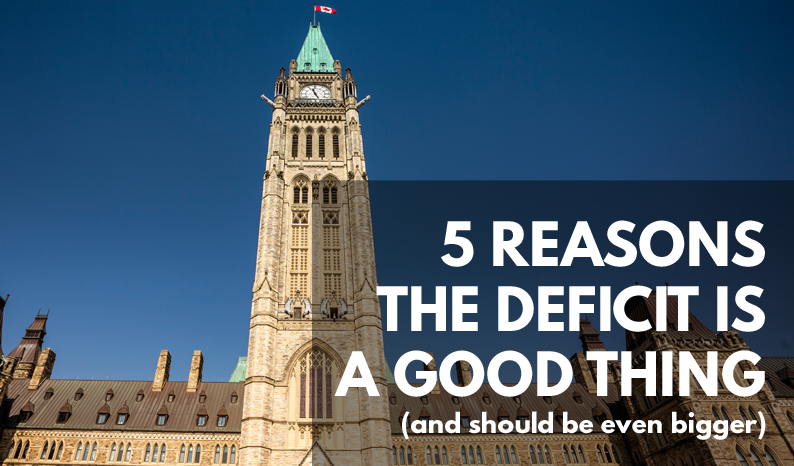 I’ve estimated a $29-billion deficit for the March 22 budget, although $6 billion of that is made up of a fictional contingency fund. Usually, most budget commentators advocate for a small deficit (or preferably a surplus). This year is oddly different with economists from CIBC, TD, and Scotiabank all urging at least $30-billion deficits over several years.

I agree with the banks (shockingly): Canada’s economy needs a significant boost in the form of federal deficit spending. The issues of slow growth, income inequality, technical recessions and stagnant employment rates—ignored by the last government under the illusion the economy would fix itself—are not going away.

But here’s what the bank economists won’t tell you about the deficit:

1. One government’s deficit is another person’s surplus

Every deficit creates a surplus elsewhere. If I give you $5, I have a $5 deficit, but you have a $5 surplus. The same is true for the federal government, except the amounts are counted in the billions. Every billion dollars in federal deficit means an extra billion in the pockets of Canadians through new transfers or higher wages, extra money for the provinces, and extra opportunities for businesses.

It’s important to note that a deficit should finance the types of activities that provide the biggest bang for the buck—programs that hire Canadians to do work like building, repairing or upgrading infrastructure and social services, or programs that transfer money to low-income families and the unemployed. A deficit that sends money to rich households would not be very useful; only a small part of this budget is likely to do that…thankfully.

Most economists know this but rarely say it. A deficit well spent on infrastructure or social programs can create hundreds of thousands of jobs. The result is lower unemployment. Given the slack in the economy today, the higher the deficit, the lower unemployment will be.

3. The federal government needs to manage the economy

It is absolutely possible for the federal government to cut back spending to balance its books, as it has done over the past couple of years. But someone will always have to pick up the pieces. Recently, that someone has been the provinces and Canadian families. The provinces, whose programs like health care and education are far harder to cut, have more debt than the federal government for the first time in history, and they pay more interest on that debt. At the same time, household debt is reaching $2 trillion, more than three times the debt of the federal government. Shifting the burden of debt to other sectors is not a responsible approach.

4. Financial markets are desperate for deficits

This may be hard to believe, but it’s absolutely true: the financial markets are desperate for higher federal deficits that create more bonds for it buy. In fact, they have bid down the real interest rates on federal debt to either zero or into the negative, after inflation. To provide some context, if you had a negative interest rate on your mortgage, the bank would send you a cheque each month, not the other way around.

5. The federal government doesn’t have a spending problem

The federal government doesn’t have a spending problem—it has a massive revenue problem.  Federal expenditures as a share of the economy are the smallest they’ve been since 1940—before medicare, employment insurance or modern old age security were introduced. The federal government is smaller today than at any time in post-war history, despite the larger responsibility it holds.

Revenues are also bumping along near all-time lows. Massive decreases in taxes over the past 20 years account for that revenue problem: marginal income taxes on the richest used to be over 70%, now they’re 50%; corporate income taxes used to be at 50%, now they’re at 26%; personal tax loopholes gave away $200 billion in 2015 alone. If the federal government needed to close a deficit for some reason, reversing any of these changes alone would cover it.

To sum up, if you’re going to run a deficit—which the banks, most political parties, and progressive think-tanks like the CCPA all somewhat oddly agree we should—go big or go home. The government has the room to spend more than $30-billion, as long as it’s going to all the right places.

David Macdonald is a senior economist with the Canadian Centre for Policy Alternatives, and the coordinator of the centre's Alternative Federal Budget project. Follow him on Twitter @DavidMacCdn.