Five myths about the tough-on-crime agenda 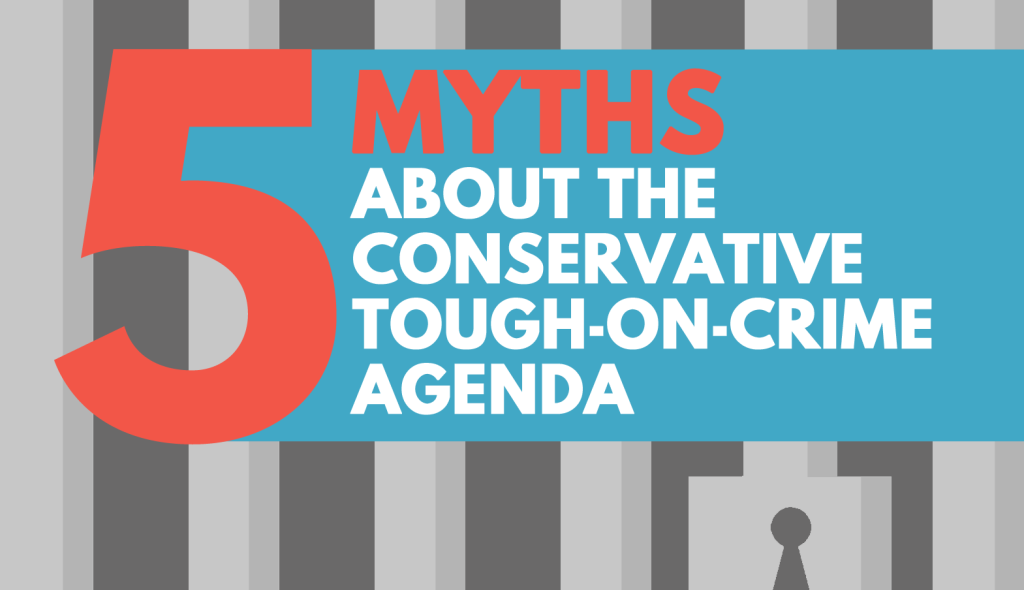 When Stephen Harper announced the election on August 2, he suggested only the Conservative party has the experience and knowledge to keep Canada safe and prosperous. A closer look at his government’s tough-on-crime agenda suggests otherwise. In fact, it’s one area we can safely say the government is making Canadians less safe while spending more money than they need to—and spending it in all the wrong places. CCPA research associate Paula Mallea picks apart five myths of Harper’s tough-on-crime rhetoric.

According to the federal prison ombudsman, long prison sentences combined with a shortage of rehabilitation programs are a direct threat to public safety. Correctional Service Canada agrees that rehabilitation in prison is essential to the successful reintegration of offenders into the community. Yet programs are currently being eliminated for the sake of alleged budgetary restrictions. Among other things, this means fewer offenders are being released on parole (and therefore under supervision), and others are being released directly to the street with no supervision at all, many having received no treatment or rehabilitation.

Large numbers of prisoners are being double-bunked, leading to appalling conditions of overcrowding, disease and violence. Correctional officers recognize the danger of overcrowding: violence in the prisons has increased and use of force by guards has escalated.

Actually, incarceration after a crime has been committed does not help the victim, and does nothing to prevent crime and subsequent victimization in the future. Victims’ advocate Lorraine Berzins, who worked in federal penitentiaries for 14 years and has been a victim of serious crime including a hostage-taking, says the tough-on-crime agenda causes harm, goes against all the evidence about what keeps communities safe, and costs a lot of money. She says victims are more concerned about prevention and rehabilitation than they are about tough sentencing. Another victims’ advocate, Arlène Gaudreault, says victims are being exploited by the federal government and used as a tool for partisan purposes. She says tackling the root causes of crime, including poverty and inequality, are the way to reduce victimization.

Myth 3: Tough-on-crime policy is good use of taxpayer dollars.

In the first five years of the Conservative government’s mandate, there was an 86% increase in federal prison costs (from $1.6 billion to $2.98 billion). Between 2002 and 2012, Statistics Canada says criminal justice spending overall increased by 23%. In addition to the colossal costs of incarcerating more prisoners, there are the increased costs of policing, prosecuting, judging, paroling, supervising and so on. Meanwhile, the government has largely rejected more effective and less expensive policy options.

For example, house arrest has a high success rate and costs less than incarceration. While offenders who serve their sentences in prison reoffend at a rate of 30%, only 15% reoffend if they serve their sentences outside the jail. Fifteen such sentences save the system $1 million a year, but the government has moved to restrict the use of house arrest. The objective, it says, is to punish violent repeat offenders, so they added a number of offences to the list of those that do not qualify for house arrest. They include bribery, forgery and perjury, none of which has a violent element.

In another case, the government’s own five-year, $7.5 million study showed that a program called COSA (Circles of Support and Accountability) saved $4.60 in policing, prison and other costs for every dollar spent on the program. COSA provides trained volunteers to help sex offenders reintegrate into communities. The program achieved a dramatic reduction in repeat sex crimes, showing anywhere from 70% to 83% lower recidivism rates. Thus, victimization was being reduced while money was saved. Despite its professed concern about sexual predators, the federal government removed its funding for COSA.

The crime rate has been falling all over the western world since the 1990s, including in Canada, and other countries have recognized that over-incarceration is not the way to address crime. The United States even recently came to its senses, spurred by the staggering costs of incarcerating thousands of non-violent, victimless offenders. Today, there is a bipartisan move to repeal mandatory minimum sentences and to release prisoners on an amnesty program. New York State reduced its incarceration rate by 15% over 10 years and saw its violent crime rate drop by 40%. Texas also reduced its imprisonment rate and recorded a reduction in crime of 10% over five years.

Canada used to be admired internationally for its approach to corrections, particularly its treatment of young offenders and its progressive rehabilitative programs. Today, Canada is moving in the other direction—establishing mandatory minimum sentences, incarcerating more offenders, making it harder for them to obtain parole and ensuring that the conditions of their incarceration are harsher. Of great concern is that the proportion of Aboriginal and visible minority inmates is increasing exponentially. The most rapid increase is among women and particularly Aboriginal women.

This government would have us believe that offenders are violent, incorrigible and bound to repeat criminal offences; that they are unlike the rest of us and without exception a danger to society. In fact, offenders are your family members, your friends and your neighbours. They usually have big problems of their own, and it is by attacking these problems that we will promote public safety.

Right now, about half of federal inmates are screened for mental health problems. A majority of them have been abusing alcohol or drugs. Large numbers of inmates were physically and/or sexually abused as children. About 60% of inmates have not finished high school, and nearly 40% have not finished Grade 8. All of these are risk factors for criminal behaviour and sensible policy would suggest that we should be tackling these outside the prison setting.

Those who commit crimes, “are all human beings, they’re all different. Some of them are going to respond positively if you give them better opportunities, better choices…. We have to have hopeful redemption for those individuals to get them on the right path.” Prison should be reserved for “truly dangerous” individuals. “We’re not talking hundreds or thousands here, we’re talking a relatively small number of people.” Whose opinion is this? That of former Toronto police chief Bill Blair. Mr. Blair is not known to be “soft on crime.” Voices like his should be listened to.

Paula Mallea is a CCPA research associate with degrees in Canadian literature, Canadian history and law from Queen’s University. She was called to the bars of Upper Canada and Manitoba, and practised criminal law for 15 years in Toronto, Kingston and Brandon.