On January 24, I gave a presentation to students at the University of Calgary as part of the Certificate in Working with Homeless Populations program. The goal of this presentation was to discuss emerging trends in Canada’s affordable housing and homelessness sectors. A version of my PowerPoint slides, which are chock-full of visuals and references, can be downloaded here.

What follows is Part 2 of a 3-part presentation I gave that day. I’ve blogged about Part 1 here and will blog about Part 3 in the coming weeks.

1. When it comes to affordable housing and homelessness, the Trudeau government has put its money where its mouth is…so far. In its first budget, substantial new investments were announced for housing for First Nations, Inuit, and Northern communities (approximately $370 million annually for two years). New funding for renovations of existing social housing was also announced. Approximately $55 million in new annual funding was announced for the Homelessness Partnering Strategy (also for two years). Annual funding for the Investment in Affordable Housing Initiative was doubled (for 2016/17 and 2016/18). What’s more, $100 million in new annual funding for seniors housing was announced, also for two years. (A succinct list of housing-related initiatives from the 2016/17 federal budget can be found here, while a more thorough analysis can be found here.)

2. However, the Trudeau government has yet to put in place a long-term plan to deal with operating agreements that are expiring on existing units of non-profit housing. Canada’s provinces and territories receive funding on an annual basis from the federal government to operate existing housing units (mostly for low-income tenants). This funding is not just used to cover the mortgages; it also helps with the ongoing operating costs—that is, the difference between the rent received from tenants and what it actually costs the housing provider to keep the units in a good state of repair. These funding agreements usually last 35-50 years. Some of these funding agreements have already started to sunset; they’re scheduled to end altogether in 2039.[1] 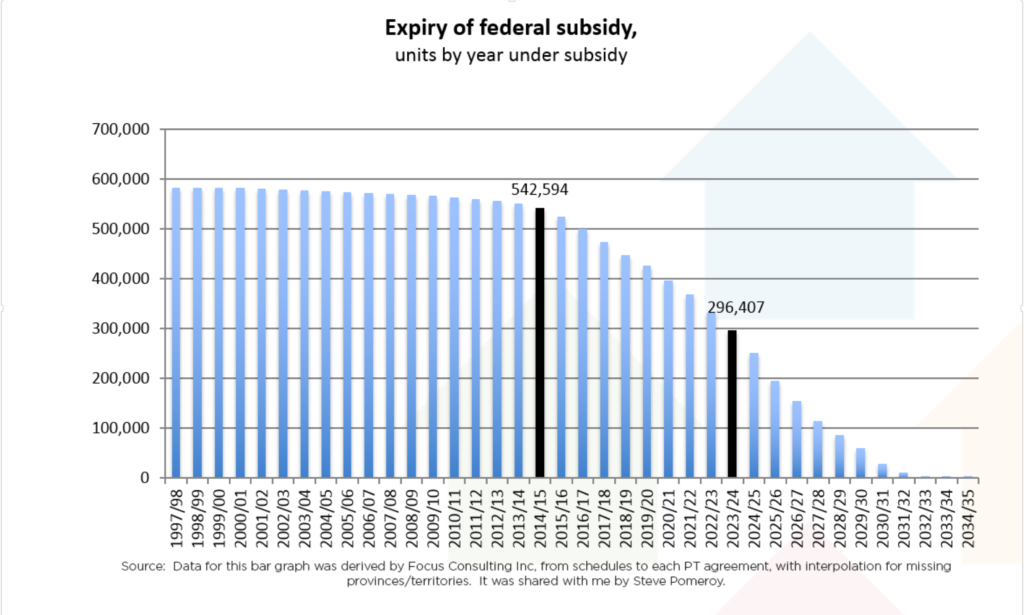 3. Canada’s aging population will pose challenges for non-profit housing providers across Canada. It’s well-known that Canada’s population is aging, and this is starting to impact homeless demographics. Among other things, this means that demand for seniors supportive housing (i.e. subsidized housing with professional social staff support for low-income seniors) will grow a July 2010 advocacy paper on this topic (with a Calgary focus) can be found here.

4. Many plans to “end homelessness” are starting to sunset. Beginning in the late-2000s, several Canadian jurisdictions made plans to “end homelessness.” Most were 10-year plans; and those 10-year ‘deadlines’ are nearing, which means the proverbial chickens are now coming home to roost. Very recently, the City of Victoria announced it was pushing its ‘deadline’ backby three years. An October 2016 report argues that such plans are overly ambitious and ill-advised without substantial new funding from senior orders of government. I think the belief that communities can “end homelessness” with a ‘can do’ attitude is starting to wear thin. Indeed, for some observers, 10-year plans, while well-intentioned, lacked the necessary support from senior orders of government to be successful. I therefore predict we’ll start to see advocates place increased emphasis on the need for deep-seated changes to public policy, and less emphasis on what local communities can do differently.

5. The final report of the National Housing Strategy will soon be released. Canada’s federal government has undertaken national consultations on the development of a “national housing strategy.” The consultation web site is called “Let’s Talk Housing.” It includes the consultation’s stated vision, principles, themes, intended outcomes, a ‘what we heard’ document and key dates.

The author wishes to thank the Canadian Housing and Renewal Association, Louise Gallagher, Kara Layher, Lindsay Lenny, Steve Pomeroy and one anonymous source for assistance in writing this. Any errors are his.

[1] Admittedly, the Trudeau government did announce $30 million in temporary funding for some social housing agreements in its first budget; but that was just two years of funding.